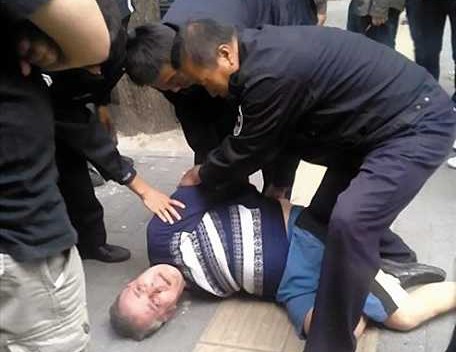 When the term “foreign national” is used in the Chinese media, all expats and travelers in the country tend to cringe.

There are no random assholes in China. Each asshole is connected to a group, and each asshole thing that they do makes the entire group look like a bunch of assholes. This is the same for migrant workers as it is for the offspring of China’s rich and powerful as it is for the foreign community. Each person in China is a reflection of the group they are associated with, and when anyone does something stupid anyone who is associates with them face the brunt of criticism.

The pedestrian that he hit is on the ground.

When the term “foreign national” is mentioned in the Chinese media, you can almost feel every expat and traveler in the country cringe. This term is usually used to refer to foreigners who have done something incredibly anti-social or just plain stupid in China. It is used in situations like when a drunken Russian goes on a rampage in a restaurant, hacks up a cook with a knife, steals a car, runs over a pedestrian, and then gets in several accidents in the streets of Beijing. When things like this happens, each foreigner in the country knows that they’ve been reflected upon negatively by some asshole, again.

We then sit back and wait for the netizens to finish pouring out their rage:

China’s visas are too easy to get~~~

Why is that laowai in China are always given preferential treatment while our countrymen abroad are always discriminated against? Why?

[We] must not let just anyone come [into the country], why is it always only them restricting us from going [into their countries]?

After a few days there will be no problem and he’ll be released, [after all] who dares to do anything about foreigners, harmonious must be harmonized.

Who could blame them when one of the news sources covering the story busted out with the headline, “Laowai [quasi-derogatory word for foreigner] Carrying Knife That Stole Car Injuring 2 People Subdued,” and referred to the perpetrator not as the “suspect” but as “the foreigner,” “the laowai,” and “the foreign national” throughout the article.

“Individuals acting independently” seems to be an estranged concept in China. There is perhaps a realization here that all people are a product of their surroundings, and a bad fruit often comes from a bad tree. This way of organizing people may hold some relevancy if it was fine tuned enough to represent reality, but when people are grouped into super-broad categories like “foreigners” or “Westerners” it becomes ridiculous. Russia is on the other side of the world from the USA, and I never before thought that I could ever be lumped into a group with Russians in under any circumstance. Even still, I’m sure that some Russian who got sick of China and flipped out doesn’t even represent many other Russians. “Can’t he just be a plain and simple asshole?” speaks the American in me.

I sit here in China trying to separate myself from the foreigners who give us all a bad name, but there is a little voice in the back of my mind that says, “Hey, one of these days it’s possible that you could find yourself in a situation that gets a little out of hand that is videoed by some netizen and uploaded onto Weibo, and all of a sudden the asshole laowai that everyone is jeering at is YOU!” I think all of us “foreign guests” need to keep this in mind.

Though, then again, not many of us are going to hack people up with knives, steal a car, and crash it in the streets. Most of us couldn’t be this big of an asshole if we tried.

Next post: US Politicians Struggle With World Geography – Again