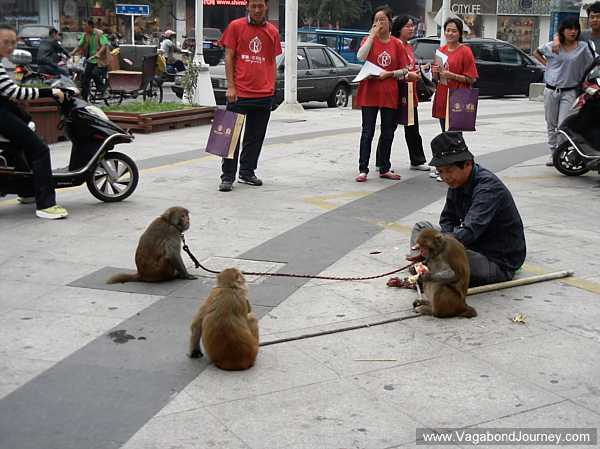 Travel street performers doing monkey shows is something that is straight out of Chinese history that continues today.

Throughout China there are traveling buskers doing street shows with Monkeys. They often come into a city, set up and do their performances in the streets for a few days, and then leave before the public gets bored of them.

Sometimes these acts get a little disgusting, sometimes they are just straight up trained animal busking. I saw one of these shows in Hangzhou where a guy had three monkeys and three small dogs on leashes. Almost needless to say, the monkeys and dogs fought. I don’t think this was suppose to be the act, but it was sure entertaining none the less. More often than not, these shows are not as exciting, and usually consist of monkeys shaking hands with the crowd and taking their money, dancing, acting with props, and, in general, putting on a comedy routine with their trainer. Whatever is the case, it sure beats most busking acts.

I’ve watched these monkey shows from time to time as I’ve traveled through China, and I have to admit that I find them intriguing. It’s not the monkeys doing stunts that I’m interested in, but then men traveling with them. Each monkey man usually has four or five monkeys under his charge that he’s trained to do various tricks and to take money from spectators. I simply can not imagine traveling with a troupe of monkeys, though the graft is a good one.

These traveling buskers doing monkey shows are something straight out of Chinese history.

Next post: When One Expat in China Does Something Stupid All Expats Feel the Effect

Previous post: What Can Cause A River To Run Red?