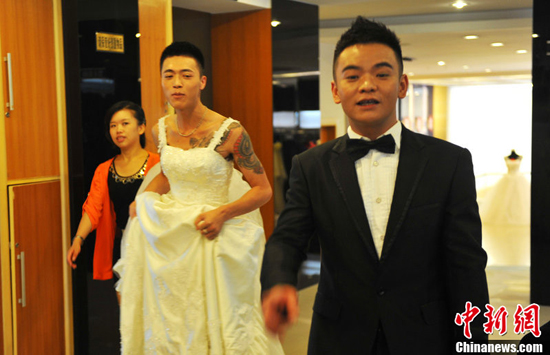 Same Sex Marriage in China: A Sign of a Changing Culture?

Are these gay marriages in China for real? They answer seems to be both yes and no.

Last month, an article in China’s People’s Daily featured the marriage ceremony of two young men in Fujian province. The piece started out by saying that this same sex marriage “caused a sensation” by attracted the attention of a thousand onlookers, then continued by showing wedding photos of one man in a bridal gown and the other in typical groom attire before finishing on a touching note by stating how one of the grooms’ sister wished the couple a happy and peaceful life. It then said how the entire wedding party sang a song together called “I Want to Have a Home.” But what was conspicuously missing from this piece was a mention of the fact that China does not officially recognize same sex marriage, and, therefore, this wedding ceremony was simply that: ceremonial. It did not lead to a legally recognized civil union.

This detail is usually left out or marginalized when the Chinese media covers a same-sex marriage. The angle of these articles is that China is progressive in the face of such a  “controversial”  issue, and men here are free to marry each other if they chose. But the fact of the matter is that gay marriage is no more recognized here in China than it is in Texas.

Though these same sex, quasi-marriages are not legally binding in China, it is my impression that their symbolic social impacts are pretty much the same as if they were. Marriage, at root, is a social/ family arrangement first, a legal arrangement second, and though these unions are not backed with government approval, they are happening from time to time across the country.

But same sex unions are by far the exception and not the rule of how many homosexuals arrange themselves in marriage. As we’ve previously covered in an article called Gender Lines in China,  80% of gay Chinese men still marry women and live the social life of a heterosexual, often due to family pressure. These marriages are referred to as tongqi 同妻, which translates as “gay/ wife.” Another way that some gay Chinese have started “gaming” the marriage traditions of their culture is by engaging in a tongzhi 同志, “gay,” marriage.  This is a type of union where a gay man and a lesbian get married in order to have the public life of a heterosexual couple while privately continuing their separate same-sex romances. In a culture that often honors face and presentation more than reality, these unions can serve as wide detours through which some queer individuals claim a degree of romantic freewill while remaining within the social fold.

“Family is such an important concept here; people aren’t supportive of homosexuality because they basically believe same-sex couples can’t form a family,” ran a quote in an article on the Guardian. It is commonly believed in China that happiness and fulfillment in life is often directly related to having a family, and it is not widely understood how a gay couple could have this. It is this pressure that often leads to gay people to engaged in rigged types hetero marriages.

Though gay people engaging in hetero marriages in order to curb social/ family pressures may seem extreme, when taken in the context of this culture they are just a notch more estranged than many typical Chinese marriages.

The social pressure not just to marry but to marry “appropriately”  in Chinese society is intense for everyone, regardless of sexual orientation, and marriages here are rarely based on love or the personal preferences of the individuals being wed. Rather, marriage is a mechanism through which social ties are created and family status is maintained. Marriage arrangements here are still very traditional, and family influence in the matter often trumps all other factors — including whether or not the individuals being wed love, or, in many cases, know or even like, each other. Most people here have been conditioned to acquiesce with these demands and marry a person that their families appoints or approves of rather than trying satisfy a personal pursuit of love — which is more often than not regarded as a mere trifle. In point, gay marriages are not only shocking in China because of the same sex aspect, but because they involve people marrying for love and exercising self-determination in a social sphere that is traditionally dominated by family influence.

In many ways, Chinese culture is very open and tolerant of homosexuality and gay marriage. When two men publicly get married it becomes a spectacle more because it’s unusual and interesting rather than because it’s something that the society wishes to exterminate. In recent polls, it was found that 30% of Chinese people support gay marriage outright and a whopping 91% of people said that they would not mind working with gay colleagues. Han China lacks the religious influences which often bolster anti-homosexual sentiments, and overt harassment of people on the grounds of being gay here is not nearly as common as it is in the West. As I’ve written before, the Chinese have an amazing live and let live outlook, just so what they’re letting live does not do so within the walls of their own home.

Marriage is a family issue, and when it comes to a person’s family member getting married to someone of their own sex they often sing a tune that sounds nothing like acceptance.

In 2010, China reported it’s first publicized gay wedding. “We are no longer hiding any more,” one of the grooms stated. But doing so was at the expense of becoming estranged by their families, as this marriage was firmly condemned by that of both men. “My sister warned me she would never call me her brother unless I break up with Pan, and I have answered hundreds of phone calls from friends and relatives who say they feel ashamed of me,” the other groom stated.

In 2011, a Mr. Mark and Mr. An An were married in Shenzhen, becoming the city’s first gay couple to have a wedding. But their families were not present at the wedding, and they both claimed that they did not even invite their parents because, “They will be furious to death if they know it.” For their friends and family that they did invite, they reported receiving responses like, “An, you must be crazy. Go and see the mental doctor please” and “Mark, you must be kidding. I’ll present next time when you marry a girl.”

China has a relatively liberal society made up of very conservative family units. Many people are tolerant of various lifestyles that are atypical or nontraditional just so it’s not their family members or close friends partaking in them.

As China culturally advances into the globalization age, a homosexual identity is likewise becoming more of a defined social designation. Outside of the initial decades of the Communist era, China has a tradition of not only tolerating same sex intimacy but, in some social spheres, outright accepting homosexual acts. Though the people who engaged in these sexual exchanges often did not identify as gay, and, likewise, did not have an altered social designation. In point, “gay” was something people did, not something they were. But this has been changing rapidly as homosexuality moves beyond a sexual side act into a mature lifestyle.

But, throughout these social changes, the perspective of the Chinese government remains unchanged. When regarding homosexuality, the official position falls under the “three nos” category:

Needless to say, gay marriage in China is not even close to being officially recognized.

Previous post: Kinmen, We’re Not In China Anymore – Or Are We?