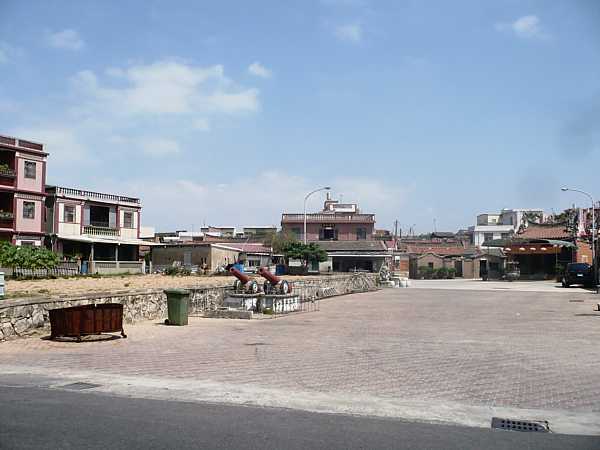 Kinmen, We’re Not In China Anymore – Or Are We?

An enclave of Taiwan sits right off the coast of China. It’s called Kinmen Island, and it sure is a strange little place.

A missionary talking to me about Jesus while I am in line at a 7-eleven waiting to buy a bag of Doritos… that’s how I know I’m not in China anymore.

Or am I?! The Kinmen islands (金门岛), despite being only a few kilometers from the Chinese mainland, are under the control of the Republic of China, not the People’s Republic of China. Might sound confusing for people not familiar with East Asia geopolitics, but it means I’m in Taiwan now! That means I had to go through international passport control, get Taiwanese dollars, and tick another “country” off my list.

This is where the war ended in 1949: the Nationalist forces, backed up all the way to the biggest of those islands after suffering defeat after defeat at the hands of the Communists reorganized their forces and eventually triumphed after a long and bloody battle on the beaches and some urban warfare in the villages. This stopped the advance of Mao’s army, technically ending the civil war but starting a long and uncomfortably tense stalemate as the two incarnations of China still to this day — 60 years later — can’t agree on who has legitimate control over what.

And even though things are not what they used to be, one can only imagine the atmosphere in the post-war years on this tiny sparsely populated island (there is only one town, Jincheng, and a handful of villages) so dangerously close to the enemy shores. Beaches were cleared, mined, and covered with anti-barge and anti-tank structures, large bunkers were built, roads were enlarged to allow military planes from Taiwan to rapidly come in case of an attack, and battalions of Chiang Kai Shek’s soldiers were deployed.

Even now, large pieces of artillery are still pointed right at the Chinese city of Xiamen’s imposing skyline, with giggling Taiwanese tourists dressing up in military fatigues taking pictures of each other operating the Howitzers. A bit morbid if you ask me, but hey, it’s just for fun apparently.

A bunker in the middle of a roundabout

The welcoming committee should the PLA decide to do a surprise visit.

While I’m taking a quick dip in the bay under the curious eyes of the Taiwanese families standing around on the beach, two yachts appear that are packed with dozens of Mainland Chinese. They are waving huge PRC flags, loudly cheering, and circle along the bay close enough so we can see their faces and hear their patriotic chants, though at enough of a distance not to cause an “international” incident. After making their point they then speed off and disappear.

The whole thing reminds me of petty inter-neighbor prank wars from a bad comedy, even though in this scenarion it must be much more serious. After all, trespassing (or, god forbid, an actual attack) on this island has the power to start a goddamn world war.

Where is Kinmen Island?

Strange place, indeed. I like strange places. Not strange in the superficial sense of “Look! That guy is eating snake, lol! And look at his silly hat!” but strange in the sense that I wonder how places such as this can even exist. Belgium is a similar example: backpackas passing by might see it as a bland, uninteresting place just conveniently located between Paywriss and Emsturdem on their eurotrip, but spending a bit of time there, observing, and talking to people can make a traveler seriously scratch his head about the sheer absurdity and unique vibe of a place made up of two nations (three, if you consider the small pockets of Germans in the south east) that have absolutely nothing in common except their love for top quality beer, yet have stayed cohesive for so long. Here, in Kinmen, I have the same feeling: how the hell does a place like that even exists1?! It’s as if during the Cold War, Rhode Island belonged to the USSR.

Or maybe not. I’m just a laowai, I don’t know much.

And that isn’t the only way in which Kinmen reminds me of Belgium. This island has similar wide and empty roads, relatively flat scenery, and even the style of the farms which provoke memories of when I was biking in Flanders and the Netherlands.

I appreciated this quietude, coming from the frenetic boulevards of Xiamen. I also notice a few subtle (or not) differences with the mainland, such as Falun Dafa billboards, omnipresence of traditional characters rather than simplified, and shop signs being vertical and prominently displayed above the sidewalk — which is something I have only seen in Hong Kong or Chinatowns worldwide — as opposed to the Mainland where they are nearly always horizontal and placed on the store wall itself. I honestly have no clue how to explain that little peculiarity.

But beside biking, eating some tasty fried seafood, checking out the museum, pagodas and bunkers, there isn’t much to “do” on Kinmen island, and I am not surprised that I don’t see other foreign visitors. All the tourists I see are Taiwanese tour groups, traveling by ACed bus and congregating in the same 2-3 areas, and there doesn’t seem to be anything adapted to independent travelers without their own transportation except for a public bus that seems to be very, very sporadic. Still, I recommend going over this little enclave to anyone who is in Xiamen and wants to see another slice of China, one that few even know about.

WARNING: As going to Kinmen means there you actually leave China, make sure you have the visa to come back! Or fly to Taiwan from Kinmen airport, which is cheaper than directly from China. On the other hand, having your passport stamped out/in allows some foreigners living in Xiamen or the surrounding to actually use Kinmen as a place for visa runs, which is a more convenient option than always going to Hong Kong.

About the Author: Felix Gervais

Felix likes extreme music, cooking spicy food, riding bicycles, drawing comics and going to weird places. He is currently on a never-ending quest to find the best 麻婆豆腐 in all of China. Felix Gervais has written 11 posts on Vagabond Journey. Contact the author.