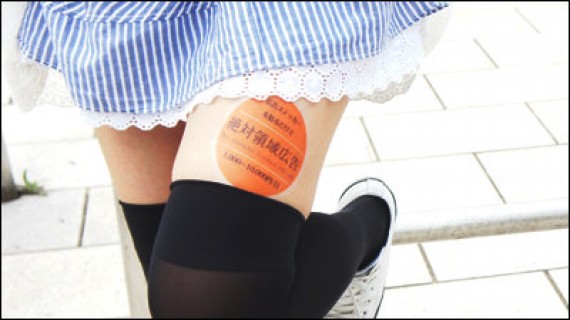 People instinctively focus our attention on the faces and other body parts of people around us. Why wouldn’t advertisers go there?

For $120, would you walk around for a day with a sticker advertising the latest gadget stuck to your forehead? Would you wear an advert for the local gym applied to your lower thigh? Would you jump at the chance of having a temporary skin transfer promoting a dance club applied to your chest?

It has come to this in Japan: youths looking for some extra cash have started selling off parts of their bodies as advertising space. They are placing stickers of advertisers’ logos and slogans on their faces, their arms, and their legs in exchange for a prearranged payment. They then walk around through cities and engage in their regular daily activities as a human billboard. They take photos of themselves in the midst of this promotion, and upload them to their social media accounts, thus blending the brick and mortar world with the digital.

A example of a face ad.

Tatsuya Okawa, who lives in Yokohama, started up a couple of websites which matches advertisers with people willing to sell body space this past summer. He said that the idea came out of a conversation with his coworkers. “They made me realize how interesting it would be to combine the digital and the analogue.”

A company called Face Ads was born. On this site, potential advertisers can calendar in dates when they want Okawa to stick their ads on his cheeks or forehead. He then showcases these adverts as he goes about his daily activities and then records his endeavors on Facebook and Twitter.

Current rates for an eight hour “face” promotion are around $120, which is truly not a bad daily chit even in costly Japan. On top of this, many of these human billboards can work other jobs, which truly makes their advertising earnings a passive income.

This fresh model for advertising was also tested by the author, Murakami Takashi. He designed a cute sticker to promote his new book and then employed young women to walk around Tokyo with it stuck on their bare thighs. The promoters then upload photos of themselves posing and displaying these stickers to their social media accounts. The head of his advertising department claimed that, “We can expect to spread word if those girls upload their own photos of them wearing this little cute sticker on the Internet.”

There are other companies getting into the act as well. A Tokyo based marketing firm called Wit offers something they’ve dubbed “Absolute Territory PR,” which just means that they place adverts within the “absolute territory” — the bare thigh area in between knee-high socks and skirt — of young women. They run a website where women who have a social media following can rent their thigh space areas to various advertisers. Once enrolled in the program, these girls walk around their city wearing the ads and then, of course, upload “cute” photos of them doing so to the social media networks.

This form of advertising blends the social networking of the flesh and bone world with that of the digital one, which are two spheres of socializing that are ever more growing together. But through both social sectors the emphasis remains the same: a real life person — not a model, not an actor, not a character, not an icon — is being connected to a company or a product. This is advertising that has dropped to the level of the street, literally. These body ads are meant to grab people’s attention and get them talking. It is my impression that these are not meant to be high and mighty commercial promotions, but a way to send advertising buzz waves through a person to their face to face and digital social connections.

People are interested in other people, and when one of our own connects themselves to a product or service we may talk about it — even if it’s just for the sake of conversation.

In an age where the surface area of man y cities are blanketed with advertisements on billboards, signs, posters, storefronts which are endlessly vying for our attention, it’s all too easy to become callous to this onslaught and end up virtually ad-blind. Breaking through this barrier and getting attention is one of the hallmark challenges of advertising. Dropping ads down off the wall, the billboard, and the store front onto the people in the streets is becoming ever more of a method to get adverts connected with eyeballs.

A pair of sexy legs have been used to get people’s attention in 2D advertising for a very long time. The legs draw you in intuitively and you take in the ad virtually through osmosis. How much better a method this could be if the legs were on a real, live woman? Perhaps unfortunately, it seems as if advertisers are realizing this.

People look at other people, this is a fact that can’t be denied. We look at each other and hardly even realize it. We look at how the people around us are dressed, what they’re carrying, what they’re looking at, what they’re reading, what they’re doing, etc . . . When their is something aesthetically unusual on a person we intuitively hone in on it with an extra degree of focus. Humans are programmed to focus on other, it’s something that’s just ingrained in our DNA, reinforced by our cultures, and there’s little we can do about it.

The face area in particular locks in our attention and commands our lines of sight. The human face has been used consistently in many forms of advertising for the simple fact that people are pre-programmed to look at faces. Simply putting a face in an ad is often enough to commandeer attention for something that would otherwise be ignored. Now if there’s a big sticker plastered on someone’s forehead each person they encounter is automatically going to be drawn to reading it — whether they want to or not. Some people may even have their curiosity or interest aroused enough to take out their mobile device and check out the website being advertised on the dude’s face they just looked at.

As of now, these Japanese body ads seem to be a very small time advertising tactic, but they are showing signs of being effective. Okawa claims that his business is booming, and some of his clients have attested to the fact that their website traffic rises drastically on the days he wears and promotes their face ads.

Though Okawa fears the obvious: if too many people wear body ads they may lose their shock value, draw less attention, and have their potency greatly diminished through saturation. This is perhaps true — a good amount of current body ad success is probably based around their novelty. But the fact remains that there is currently an over-saturation of advertising in conventional mediums, and companies still pump millions and millions of dollars into plastering their logos on billboards, signs, and websites. I hate to say it, but I see a future in body ads if for no other reason than the fact that humans are a medium that other humans instinctively focus on. It is not my impression that faces or the bare legs of women will ever become things that will lose our attention.

If advertising on a big, lifeless wall works, then why wouldn’t it work on a living, breathing human? In the connection economy, the new sphere of business that we’re all hurling towards, the “personal” and the “individual” are key concepts in advertising. Dropping adverts down off the wall onto the people in the street is both an intriguing and terrify sign of our times.

I am the founder and editor of Vagabond Journey. I’ve been traveling the world since 1999, through 90 countries. I am the author of the book, Ghost Cities of China and have written for The Guardian, Forbes, Bloomberg, The Diplomat, the South China Morning Post, and other publications. VBJ has written 3652 posts on Vagabond Journey. Contact the author.