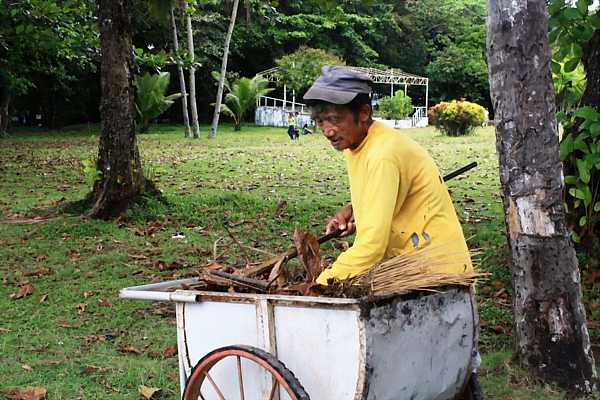 Old Man in the Park: People of the Philippines

A glimpse into the life, the disappointments, and the resolve of an old caretaker of a park in Palo in Leyte, Philippines.

“I am not afraid of anybody wherever I go because I do not cheat anyone.”

That sentence hit me hard. I was speechless; I could only nod. In my heart I could feel the knot brought on by the joy that somebody in my travels has shared with me some words of wisdom — or maybe it was the pity I felt for this man who has experienced more betrayal than he deserved in his life. I was moved.

I was in a historic park in a town called Palo in Leyte, Philippines. This wasn’t any ordinary park; here stands the larger-than-life bronze statue of the great American general who promised to return to the Philippines and liberate the country from Japanese occupation in 1944. Gen. Douglas MacArthur landed at the Red Beach of Palo where he waded ashore and made his famous “I have returned” speech. His handsome — no kidding — statue now stands in a man-made pool in this park.

I sat down under a tree to nurse the headache caused by the cruel heat of the sun that penetrated through my phony RayBan’s, and enjoyed the sound of the waves and the sea breeze while I scanned the surroundings. The place was perfect for picnics. There were kids playing and families eating. There was even a large group of police people who were doing their training at the beach. There were lovers dating too.

Only one person interested me though. I watched him frisk himself with shaking hands searching for something he might have dropped or left somewhere. He slowly traced the way where he came from and returned with a face towel. I watched him some more while he raked leaves and loaded them into his wheelbarrow. I wasn’t leaving the place without talking to this old man.

I always feel fascinated with old people during my travels. Their faces just tell so much.

I walked to where the old man was working, and just stood there & watched him while mustering the courage to speak. He knew I was watching. A little girl must have been wondering why I was staring at the old man, as she stopped beside me and watched him too. Then finally I started with asking if he had been working in the park for a long time.

He welcomed the question and confidently answered with his surprisingly fluent Tagalog. I was glad the conversation wouldn’t be so hard for us both, since he didn’t seem to have trouble speaking Tagalog unlike others who have a different native dialect in this part of the Philippines. My first question led to a few more. He was very eager for a chat and I felt comfortable talking with him because he was giving away more answers than I could ask.

His name was Jun Altis, and he has been working in the park for over 20 years. He’s not originally from the town but he moved there to work. The government of Palo pays him and he receives the mandatory benefits of a government employee. He’s one of those workers who maintains the 4½ -hectare park everyday.

He continued to rake leaves while talking to me; he would sometimes pause and stand straight and make eye contact. He appeared weak and his movements labored. He offered more information about the other tourist spots in the neighboring towns while he explained where he really came from. He told me he was living alone in his house nearby. I asked around the topic of pay and benefits and I remember thinking his pay wasn’t bad. He said the workers in the park used to be under another management but when it was changed some of their benefits were cut. He gets two days off every two weeks.

“So is your pay enough since you live alone?” I asked.

“No, I still give money to my daughter. So it’s never enough,” he responded with a smile.

I asked him how come he had a daughter but he was living alone. He shared that his wife left him and his daughter has already gotten married and lives with her husband in another town.

“Doesn’t she work?” I followed up.

He told me she got pregnant and hasn’t finished school.

“I thought she was studying all along,” he said sadly.

At this point, I already found it hard to react to his stories. He was telling me so much about himself. I didn’t know what questions to ask anymore but he kept sharing his stories. He said he couldn’t really tell off his daughter and isn’t very strict with her. She is his only child after all, he couldn’t resist her.

Mang Jun continued with more stories of his life’s disappointments. He paid for a life insurance for many years but when he finished paying and tried to verify it, it turned out the payments were not remitted. He also told me about a nephew who used his benefits to apply for a loan. He came with an application form and had it signed by the old man. I asked if the nephew paid him back.

“He seemed to have already forgotten about the loan,” was his reply.

He also bought a carabao, a type of domesticated water buffalo, to help in the farm of his sister, but it died and he was never paid back.

“That’s life, no choice but to accept those disappointments,” the old man spoke. I have been cheated by many but I am not afraid of anybody wherever I go because I do not cheat anyone.”

Old man working in the park

All I could do was nod. In only a few minutes I had learned so much from this man. I knew more stories could have been poured out but I was already thinking how I could politely end the conversation. The gray clouds started to hover above us, and I needed to get to the airport.

Finally, I asked him if he was planning to retire soon, to which he answered NO.

“I’m going to work as long as I am able and I hope they don’t force me to retire.”

With that I thanked him and wished him good health. I bade farewell to him with a heavy heart. If only I could have stayed longer and listened to him eagerly share his life’s stories.

Next post: Kinmen Island, Taiwan: What Is This Place?