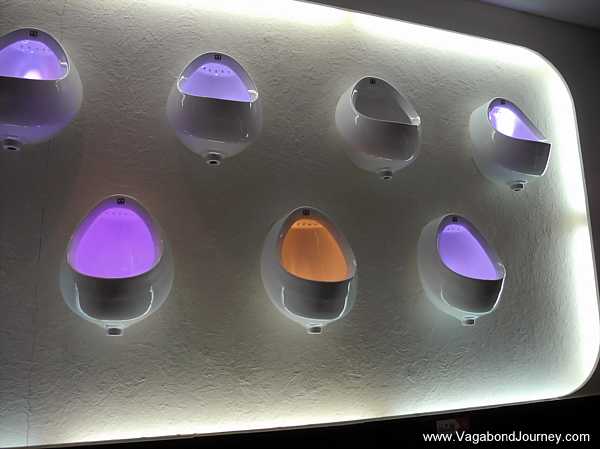 Modern Toilet: the restaurant that showcases both sides of food.

I was looking for a toilet in a mall in Xiamen when I spotted the international symbol for bathroom shining down the hallway. The stick man and his skirt wearing companion were lit up on a sign, and I was drawn towards them. I took the bait, but soon realized that I wasn’t walking towards a bathroom, but a restaurant.

The place was called Modern Toilet, it’s a Taiwanese chain restaurant just making headway on the mainland. It was the first time I’ve seen one, and the gag was too ridiculous to pass up.

It was always my impression that humans — or animals in general — have an instinctual reaction against their waste products. We especially don’t like it when bathroom thoughts arise during meal time. How then does a chain restaurant that bases its theme around toilets, piss, and shit not only stay in business but expand and grow through East Asia?

I went inside. The seats were toilets — real ones — and glass table tops were placed over actual sinks. Bathroom logos were everywhere. The back wall was made up of urinals that had disco era light fixtures embedded within them. Everything from the seat cushions to the lamp shades to the table decorations were made to look like poops — some of them were wearing friendly smiles while others were made to look as gross as the real thing.

I looked around the room to see what the other diners were eating. The food appeared to be standard mall fare, but the cutlery complied with the bathroom theme. The cups were little urinals, the plates were sinks, the bowls were tubs, and the mugs were, of course, toilets.

What surprised me most was the fact that the other diners were eating their food out of ceramic toilet bowls and drinking out of little urinals as though there wasn’t a novelty in sight. Couples were on dates, and nobody was taking photos of the decor or even seemed to be laughing about the bathroom theme. How can anyone take a restaurant called Modern Toilet that has little rubber poops all over the place seriously?

Apparently, the Chinese. Now, I can see people being attracted to this restaurant for the novelty and the stark-counter-intuitive trendiness of it, but these people seemed to be there for the food. I wondered how that worked:

“I’m hungry, want to go to Modern Toilet? They have good French fries there.”

Though I do have to admit that I like how this gag restaurant makes the connection between food and drink and human waste. I’ve always been repulsed by people who have an overt interest in food. Food writers especially make me queasy. The topic of these people’s intrigue is the raw material of shit. How can anyone go into a restaurant and watch a room full of people gorging themselves with food and not think of the inevitable aftereffects? Input and output.

I ordered a coffee. Though it came in a toilet it actually wasn’t that crappy. I suppose if you can keep your appetite while sitting on the pot, Modern Toilet is not that bad of a restaurant. Just don’t order the chocolate ice cream.

Yes, that is what you think it is.

Cups in the shape of toilets.

The seats are toilets — real ones.

Rubber duckies and everything.