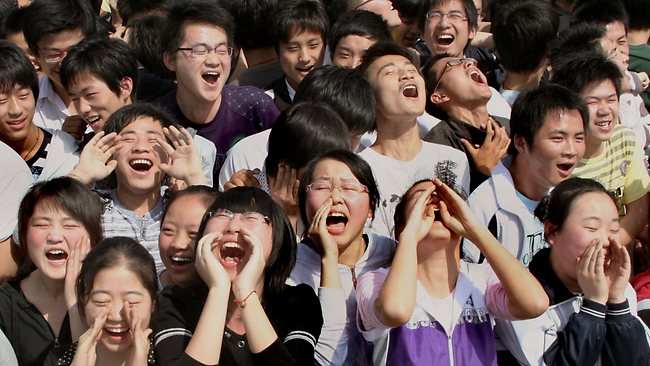 The student abuse hysteria continues in China as teachers are put on the social chopping block.

A foreign teacher was attacked by one of her students in a private school in China’s Jiangsu province. The teacher requested that the ten year old stop doodling and pay attention to the lesson, and when he desisted, she removed the pencil from his hand. The student then became enraged and began punching and kicking the teacher. The foreign teacher, who has been teaching in China for more than two years, fended off the attack by grabbing the kid by the ear and pulling him off to a containable location in the classroom. This was the forth time that this student had attacked teachers at this school.

As this situation was reported to me, nobody seemed to initially think that this incident was that big of a problem — dealing with the occasional bout of aggression from an ill-tempered student is part of the job of being a teacher. But this wasn’t the case:

Instead of being shamed, the kid’s mother took retaliatory action against the foreign teacher and the school. She brought the matter to the local television station and told them that her kid was physically abused by his teacher. Two segments of video footage from the classroom’s CCTV camera of the teacher grabbing the student’s ear were aired on the news. The mother then threatened to file a lawsuit if the school did not pay her 100,000 RMB (more than $16,000).

The mother made good on her threat and went to the police with the matter. On one occasion, the mother, the teacher, and a representative from the school met together at a police station. After confirming and reconfirming that the teacher did not hit the student in any way, it seems as if the mother wasn’t really left with much of a case. She then attacked the teacher with a broom.

The school promptly settled the dispute, giving the mother an undisclosed sum of money. Where I come from this is called extortion.

But this is currently not the case in China, where two well publicized incidents of teachers abusing their students has caused a climate of hysteria. As we reported in October, two teachers in other parts of the country were caught on video and in photographs smacking or otherwise abusing their students. These two incidents went viral on the internet and in the Chinese and international media, and teachers all over the country were promptly put under the microscope of governmental authorities, parents, and their communities as a whole. In an instant, teachers became China’s new public enemy.

It did not take long before parents and grandparents of students began threatening to take even the slightest incidents of discipline public, now calling the most basic punishments abuse. Teachers were put in a vice, being charged with to keeping control of their classrooms and educating their students on one hand and feeling trepidation about disciplining them on the other.

A major cultural shift has happened across China. Just a few months ago it was normal for teachers to use physical forms of punishment to discipline their students. Throughout my time in this country I would hear stories from wide-eyed foreign teachers about how their Chinese assistants would smack and spank their misbehaving students as a matter of course. This seemed to be normal, there were few cries of abuse and the media had little interest in publicizing the matter. Then the two incidents of excessive student abuse went viral, and this country did an absolute about face — going from one extreme to the other.

The recent incident were the foreign teacher grabbed a kid by the ear — an action that would not have made anyone think twice a few months ago — added new fodder to this fire. The local Chinese media latched onto the story, giving their viewers a double-whammy: a student abuse case AND a social infraction by a foreigner. The hysteria continued.

Teachers working at at least one branch of this school have now apparently been discouraged from disciplining their students at all. Each time a teacher is caught raising their voice or expressing disciplinarian body language at a student they are fined 10 RMB. If they are caught doing this three times they will face more serious consequences.

If a teacher can’t even raise their voice or appear angry at a misbehaving student how can they keep control of their classroom and teach their lessons? That’s the question that teachers here are asking as they try to educate kids in a society that has put them up against the wall.

This quote is taking on ever more dire meaning as China has become a place where teachers feel as if they can’t keep control of their classrooms for fear of being fined, reprimanded, socially criticized, human flesh searched, arrested. Correct me if I’m wrong, but doesn’t this seem like Red Guard shit all over again?

I am the founder and editor of Vagabond Journey. He has been traveling the world since 1999, through 90 countries. I am the author of the book, Ghost Cities of China, and contributes to The Guardian, Forbes, Bloomberg, The Diplomat, the South China Morning Post, and other publications. VBJ has written 3632 posts on Vagabond Journey. Contact the author.