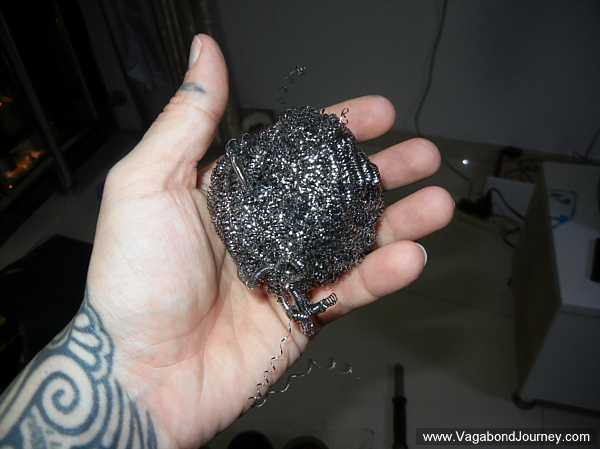 A quick, easy, and cheap way to prevent against rodents entering into your hotel room or apartment.

If there’s a hole in your wall there is a good chance that some rodent or other little critter will use it to get into your room, nibble on your food, crap on your things, and otherwise wreak havoc. Therefore, unless there are few other options, never move into a hotel room or apartment that has holes in the wall. Punto. Or if you do PATCH them holes up quick. Here’s how:

I made an error of judgement when I selected my apartment in China. I made sure that the place was adequately furnished, that it was large enough, that the water, electricity, and appliances all functioned properly, but I ignored the holes in the walls. In point, Chinese workmanship has generally not yet caught up with the country’s projected image as a modernized new world economic powerhouse, and half done/ half assed carpentry jobs are fearfully the norm. To put it simply, the holes in the walls did not look too out of place in the context of my surroundings.

A big mistake, it turned out.

A hole is on the other side of this mystery pipe that sticks out of my walk and connects to nothing.

As spring and summer past by I would sometimes hear little critters scamper around above my apartment’s ceiling but nothing ever entered into my domicile. I didn’t worry about it and ignored the holes in the walls. Then the weather began getting a little colder and a gang of rats and mice (yes, both) came in with the autumn.

Within three days it was an all out invasion.

They would come in during the night or when they thought no human was home. Their shit littered our counter tops, they nibbled on our carrots, and the sounds of them rummaging or gnawing resonated trough the nights. One rather large rat scampered right past my foot one evening and looked completely comfortable and confident in the maneuver — he knew right where he was going, he’d been here before.

It was time to take action. Not wanting to acknowledge the fact that China has still not eradicated the plague yet, I did some research and found a simple solution for temporarily blockading holes in walls against the intrusion of rodents which was so simple and cheap that it could easily be employed by travelers staying in hotels or hostels. This temporary solution involved nothing more than steel wool and some heavy duty tape (such as duct or packing tape). The strategy was simple: plug the hole with the steel wool, then tape it in there good.

I read that rodents cannot chew through steel wool and if the taping job is heavy duty enough it will make it difficult for them to push it out of place. I put this method to the test, I clogged some steel wool into the holes and taped it in.

On the first night I could hear rats simultaneously trying to chew their way through all three of the holes that I patched up. Yes, it was unnerving. I monitored the blockades, and they seemed as if they were going to hold. Three days later and they are still unbroken.

I don’t know how long this patch job will work for — I imagine hungry rodents will eventually be able to push through them when the tape begins to lose its stickiness or they’ll just find another way in — but it provided me with enough time to come up with an exit strategy (i.e. move in with friends), find a new apartment, and move out.

If you discover holes in the wall of your hotel room, taking preemptive action to prevent against unwelcome guests is incredibly easy and cheap. All it takes is a little steel wool, some heavy duty tape, and five minutes of time. Sometimes in travel it’s ultimately easier and more beneficial to just fix up your rooms yourself rather than waiting around for some sympathetic hotel owner or landlord to come save your ass. Rather than taking a chance that mice or rats may enter your room through a hole in the wall just patch it up and get it done and over with — if I’d done this from the start I probably would not have faced the rodent invasion that dove me out of my latest abode.

Next post: 11 Most Important Things to Know How to Say in Any Foreign Language