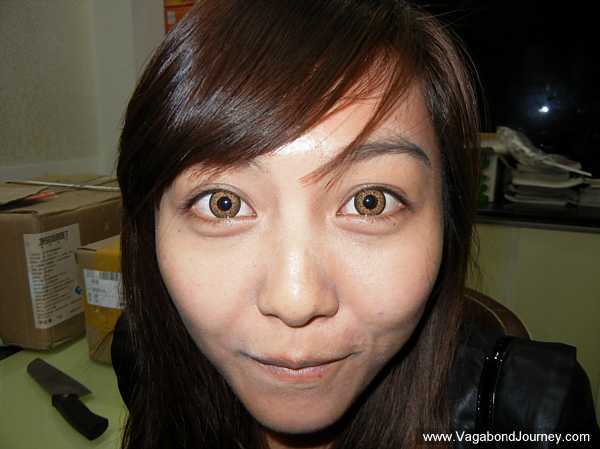 How the Chinese Make Their Eyes Look Bigger with Contact Lenses

Circle lenses give wearers the illusion of having larger eyes, which is a much sought after beauty trait in East Asia.

“She has small eyes, not very beautiful,” one of my Chinese friends flirted with a girl that was sitting near us. The poor girl blushed and admitted that her eyes were rather narrow and, therefore, were not beautiful.

Like having light colored skin, big, round eyes are considered beautiful in East Asia. This is perhaps because most of the people here have eyes which appear small as they peer out from behind the pronounced epicanthal folds.

The typical is rarely the beautiful — anywhere.

But this does not mean that East Asians  must stay on the lee side of what they consider fashionable. No, there is a product that has become very popular in Japan, Korea, and China to correct yet another biological beauty hazard:

They are called meitong in Chinese, which is actually a Johnson and Johnson trademark that has become a genericized term for all cosmetic contacts in China. They are often very conspicuous as they change the tone of the user’s natural eye color to an often extreme degree. This is incredibly noticeable in a country where a huge majority of the people sport brown eyes.

Circle lenses work by covering the eye in such a way that they make the iris appear wider, which gives the illusion that the wearer has bigger eyes. The center of these lenses are transparent, allowing the user to see through them clearly, but there is a color ring around this optical zone that extends out into the white part of the eye. Apparently, the perception of a larger iris equates to the perception of a larger eye.

Meitong come in many different colors and styles. Some are made to appear natural and some are designed to be anything but. Black, brown, green, and blue are popular colors for circle lenses, while those that imitate the eyes of various animals or even anime characters are not uncommon.

These cosmetic contacts were first manufactured and marketed in South Korea in 2004, and have since grown in popularity around the world. But the prime market for them is still East Asia, where relatively larger eyes are more of a dynamic sign of beauty than in the West.

A pair of meitong can cost anywhere from $5 to $100, and their range of quality is likewise said to be extreme. In China, they can currently be had without a prescription, but the country’s health board claims that this will change soon as many people have reputedly damaged their vision through using them.

“The lenses can scratch or poke a hole in the cornea, which basically makes you go blind,” a Beijing optometrist said in a news article.

Continuous use of circle lenses can also lead to an increased risk of infection, they can deprive the eye of oxygen, and have been blamed as the cause of various vision problems in many users. But many manufacturers and users of these cosmetic contacts say that quality really matters here, as the cheaper varieties hold the most risk.

Circle lenses are now incredibly popular across East Asia, and they are becoming almost as much a part of a young woman’s beauty accessories as foundation, skin whitener, and eye liner. Wherever you go in China you can find women wearing them. As a rule of thumb, if someone’s eyes here appear unnaturally colorful and larger than life, they more than likely are.

I sat down with a tiger eyed friend in a coffee house a few days ago and asked her why Chinese people like bigger eyes.

That’s what it’s all about. I guess.

I am the founder and editor of Vagabond Journey. I’ve been traveling the world since 1999, through 90 countries. I am the author of the book, Ghost Cities of China and have written for The Guardian, Forbes, Bloomberg, The Diplomat, the South China Morning Post, and other publications. VBJ has written 3654 posts on Vagabond Journey. Contact the author.

Next post: How to Patch Holes in the Wall to Keep Mice and Rats Out