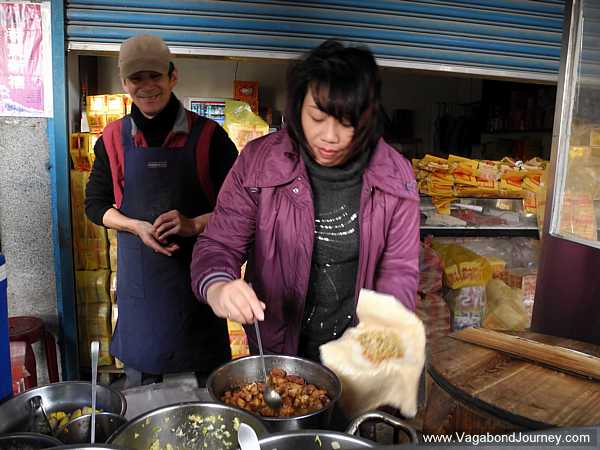 Tuan Fan is a very popular breakfast food in Taiwan and Hong Kong.

I first look for one thing when hungry on the road: street stalls. Yes, when I want a good, quick, meaty meal I run to the street vendors. I found a bunch lining the streets near the bus station in Jincheng, on Taiwan’s Kinmen Island, and, after one made eye contact and flashed me a big smile from behind his cart, I walked over to see what he was cooking.

“Fan tuan,” he spoke as he pantomimed the squeezing motion that’s a part of making it.

I got a better idea of what he was talking about by looking at the samples that he had already made which were sitting on his cart.

Fan Tuan, sometimes called Ci Fan Tuan, is a breakfast food that is essentially a tightly compacted roll of glutinous rice that’s filled, to put it bluntly, with all kinds of stuff. I looked over the dozen or so bowls and pots which were lined up in rows on the street vendor’s cart: pork, cabbage, an array of pickled veggies, hard boiled eggs, fried dough, hot pepper toppings, etc . . . I’ve eaten fan tuan many times before, but had never inquired about its name. It is probably one of my favorite breakfast foods on the planet.

I ordered one and was asked what I would like to fill the rice with. I kept it simply, I said everything.

This is a completely portable breakfast food, just carry it the wrapper it’s made in and eat when ready

Fan tuan is a popular breakfast food in Taiwan and Hong Kong.

“La? La? La?” the lady vendor asked, wanting to know if I wanted my glutinous rice roll spicy. I nodded, and she took over the preparation from the guy who was previously assembling my breakfast.

I watched as she placed a cotton cloth over her hand and then spread out a thin sheet of cellophane over it. She then spread an even layer of glutinous rice upon the plastic, and then proceeded to plop spoonfuls of cabbage, pickles, pork, egg, and some unidentified red clumpy stuff over it.

The fun part was about to begin: the vendor then rolled the rice over the filling by wrapping it all up with the cloth and cellophane. She then began squeezing it tight. After about ten seconds of this she peeled the cloth away, and handed me my fan tuan — which was perfectly wrapped in the cellophane.

The cost was 35 Taiwan dollars, which is a little over once dollar U.S. I bought a soy milk for another dollar to complement the fan tuan in proper Taiwanese style.

Fan tuan is a completely portable breakfast food, as it’s built into its wrapper. There’s no need to worry about it spilling or getting smashed. You just buy it in the street, stuff it in your pocket, and go — eating it when you can.

I walked over to an empty mahjong table, sat on a stool, and unwrapped my fan tuan. The vendor made it so quickly that I did not really even have the chance to see what she was tossing into it. I peeled away the wrapper and stared at the glutinous loaf within. I took a bite, and peaked inside: pickles, cabbage, fried bread, strips of pork, hard boiled tea eggs, red peppers, and something that may have been mushrooms. It was absolutely delicious.

Certain qualities make a good breakfast food, and fan tuan just about had them all. It is my opinion that a good breakfast should wake up my olfactory senses and digestive system: it should be filling without being over-powering, oily, pickly, and spicy, with a good amount of protein and nutrition.

Fan tuan the way that it’s now prepared in Taiwan and Hong Kong was derived from a Shanghai food called ci fan 粢飯 — which just means “compressed glutinous rice.” This was used to make rice balls, rice cakes etc . . . It was not until relatively recent adaptions in Taiwan and Hong Kong that fan tuan like the kind in this article was created, which has since been re-introduced to Shanghai and mainland China.

Next post: Kinmen: A Taiwanese Backwater or the Gateway to Mainland China?

Previous post: The Lady Coconut Vendor — People of the Philippines