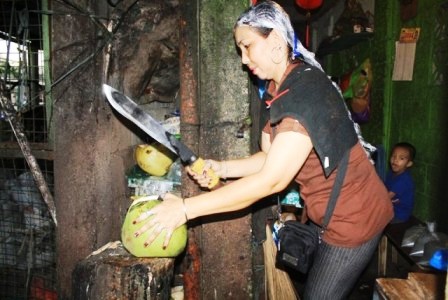 The Lady Coconut Vendor — People of the Philippines

A conversation with a coconut vendor as Christmas arrives in the Philippines.

Christmas in the Philippines isn’t only a huge celebration but a pretty long one too. Our country is known for having the world’s longest Christmas because it starts in September and ends on the day of the Feast of Epiphany, which is on January 6th. People here get excited when the first “–ber” month come: Christmas carols start playing, lanterns and lights get hung to adorn houses and buildings. Since the Philippines is a predominantly Christian country, the Christmas spirit becomes alive very early, and the roads and malls become more and more congested when people do their shopping as Christmas day approaches. It is celebrated widely with the traditional nine-day series of night masses called Simbang Gabi for Catholics, company Christmas parties, family reunions, Christmas Eve mass, gift exchange, and Noche Buena — the midnight meal shared by the family members to welcome in Christmas day.

A lot of food is prepared for the celebration, a few of the traditional ones are queso de bola, ham and roast pig or lechon. I have requested my mother to prepare my favorite salad dessert this Christmas: coconut or buko salad, which is made by mixing shredded coconut meat, all-purpose cream, condensed milk, and fruit cocktail. It’s chewy, creamy, yummy, and sweet.

Here in Metro Manila, we buy coconuts in the market or on the streets. Coconut vendors have a bolo knife, a shredder or scraper, and a pitcher that they use as they push their carts full of coconuts through the streets to peddle. One buko (coconut) usually costs Php23 to Php25 (around US$ .55), juice and meat included.

How the coconut meat is scooped out

I wanted to have an estimate on the cost of the buko salad I have asked my mother to prepare for Christmas, so yesterday I bought buko and had a chat with the lady vendor who tends a stall in the market.

I ordered two and she asked, “What kind of buko?”

It’s routine. When buying coconut or buko in Tagalog, the vendor would ask what kind you want. They mean what texture of coconut meat you’d like —- runny, chewy, or dry?

I answered runny because I want a very soft meat with my juice, no need to chew, as the meat goes with the juice and can easily be swallowed. The chewy texture is good for buko salad and the dry one is usually used for bukayo, a very sweet Filipino dessert.

She walked to where the coconuts were piled up and started tapping some to determine which one was runny.

“How do you know which ones are runny?” I inquired.

She kind of giggled and said she just knows it by the sound and it’s hard to explain.

I watched her skillfully whack the coconut with her bolo knife. Six years in this business has made her skilled in the art of opening the coconut. I began to ask more questions and her lips broke into a smile when she realized I wasn’t going to stop and I was interested in what she does for a living.

She was now done pouring the juice into the cellophane bag. She picked up the bolo again to cut the coconut into halves then scraped the coconut meat while listening to my questions.

Her name is Lerma, 43 years old and a mother of six. Selling buko is her only livelihood. Her husband doesn’t have a job; they just manage their small stall across the market together. Fortunately, she doesn’t have to rent the stall where she is selling and she doesn’t have to peddle either. Her in-laws own the land where their house stands. At the back of her coconut stall is a short and narrow alley leading to their house. They have been here for 20 years.

She used to sell fruits but chose to sell buko to simplify her job. The coconuts are delivered every other night so all she needs to do is wait. If she sells fruits, she’d need to go to the market herself to buy them.

Her stall is located on a busy corner where there’s a lot of traffic, mostly of tricycles — a three-wheeled vehicle commonly used in the Philippines.

It was hard to hear her from the noise of revving tricycle engines and she had a few customers waiting so I didn’t fire my questions fast. She answered them all with a smile. I could see a contented woman who didn’t air any complaint about her life. I never heard the word “but” from her, seriously. She looked younger than her age, wore lipstick and earrings and didn’t appear very stressed. Her hair was even being treated, and despite being covered with cellophane it smelled like a salon. As I watched her tap coconuts and whack them, I noticed all her fingers have a ring and she wore bracelets on each wrist. I’ve never seen a buko vendor this made up and accessorized!

“How many coconuts can you sell in a day?” I asked.

She sells the coconut for Php23 each. When I came back today and bought two coconuts again, the price has hiked up to Php25. Here comes the increased prices of the holidays.

“Does it cost the same during Christmas day?” I asked.

“No, one coconut would cost Php30 and we sell the meat by kilo.” She answered.

Filipinos like preparing food when there are special occasions like birthdays and fiestas. People willingly spend money on food for Christmas parties and Noche Buena. Christmas is such a big celebration that Filipinos set aside money for it throughout the year.

Vendors, including Ate Lerma, are luckier when these occasions come around. Her big customers are those who sell buko shakes and buko-based desserts around the area. She told me what she earns from selling coconuts is quite enough to support her family.  Due to the tropical nature of the Philippines and the abundance of coconut in the country, she might really be doing fine with what she earns, especially during the summer season.

A customer then came and bought 22 pieces of coconut. He already bought 11 pieces prior to that. There was an occasion so he was making buko-pandan salad. Another customer came to buy 10 pieces for his buko shake stall. Ate Lerma got busier and was already requesting for his son to help her open and scrape the coconuts. I didn’t want to hold her up from what she was doing anymore, so I thanked her for her time and promised to go back for some more buko the next day.

I’m fortunate that I can buy coconut anytime and regularly give my body the essential electrolytes and minerals for rehydration that they provide. Ate Lerma is a part of my life for the next coming months.

Coconuts being sold at a stall in Manila