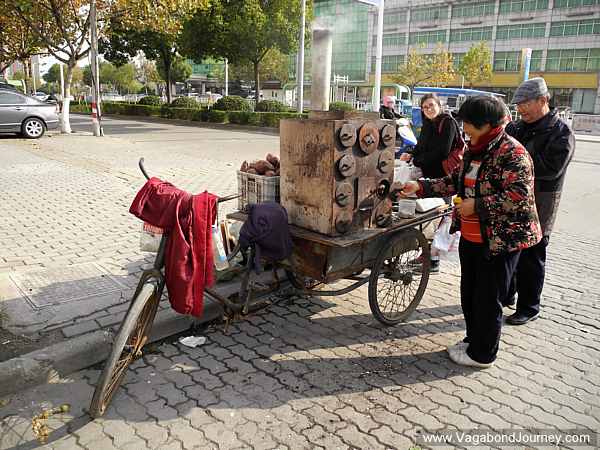 Portable Sweet Potato Oven: Another Side of Chinese Craftmanship

A metal box, some racks, and a chimney = a truly ingenuitive portable sweet potato oven.

The best place to see innovative, handmade, old-fashioned, or otherwise intriguing contraptions, tools, and machines in China is right in the streets. The public areas of this country are strewn with living museums of human ingenuity, which often manifests itself through a vibrant tradition of cottage industries being performed right out in the open. Enterprising vendors do everything from repairing bicycles, building beds, reading palms, crafting pots and pans, making eating utensils, sewing clothes, vending traditional medicines and antiques to preparing foods with a wide range of truly interesting cooking devices on the side of the road. Street-side business and manufacturing is a part of the landscape in this country, and is a type of commerce that is rooted in the culture’s old communal ethics: if a space is free it’s free to be used.

Outside of supermarkets are prime locations for mobile food vendors. They line up, cook, and sell their foods to pedestrians looking for a quick and cheap bite to eat. These vendors often have old-fashioned and truly ingenuitive cooking devices which they usually rig up to be ultra-portable mobile kitchens.

Potato roaster on the back of a bicycle cart.

I met an older lady who operated a potato roasting oven outside of a supermarket in Taizhou. She had juxtaposed the oven on the back of three three wheeled bike, and cooked her wares on the move.

The shear ingenuity and practicality of this oven amazed me: it was made specially for roasting potatoes, and was perfectly engineered for this purpose. It was basically a metal box that had a door for inserting fuel (in this case, scrap wood) onto a rack in its center, a chimney rising up out of the top, a latch for removing ash at its bottom, and nine circular drawers arranged in rows along its front. Wood would be inserted onto a rack in the middle of the oven, a fire lit, and sweet potatoes loaded into the drawers, and slid inside to bake. This potato oven was as simple as they can get, but lacked nothing in design.

The potatoes are cooked inside of little trays that are pushed into the oven.

It is these simple, yet timeless tool designs that fascinate me as I travel through this earth. Localized manufacturing leads to an increased diversity of designs, the range of which can only be observed by going to the places where they are made and used. The tools that people build and utilize say everything about them as a culture, and it’s this insight that is fast being lost as the world calibrates along similar models of mass-production and consumption.

Devices like this sweet potato roasting oven show another side of Chinese craftsmanship that makes me want to rethink my take on the term, “Made in China.”

Scale for weighing potatoes. The cost was 4 RMB for two.

Next post: Geoengineering: An Interim Strategy to Curb Global Warming? A Talk With John Latham