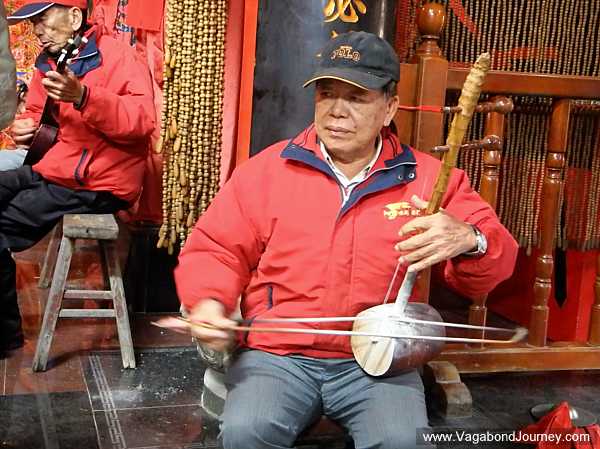 Examples of traditional Chinese instruments that are used during religious ceremonies and celebrations.

The musician was playing a type of huqin 胡琴, a musical instrument which has been dubbed a Chinese spike fiddle in the West — as the ceremony in the temple continued on. There was an older man next to him plucking a lute, another squeaking notes out on an oboe, and an entire percussion section beating out a rhythm on drums, chimes, and cymbals. The band consisted of six or seven members, and they squeaked, pounded, and squawked out something the Chinese call music as a row of men worshiped before the alter.

I asked the fiddle player if he could show me his instrument close up, and he led me over to where it was leaning up against a railing. I squatted down next to it and ran my hand over its neck, body, and strings. The pair of strings that ran down the front of the fiddle are traditionally made from silk, but in modern times this is often replaced with steel — as was the case on the huqin I was looking at. Two plugs, which were essentially hand carved sticks inserted through the neck, wound these strings taunt. The neck itself was the bottom part of a sapling, which looked to me like bamboo. The body of fiddle was a hallowed out wooden cylinder which was topped with a thinner piece of wood. The bow appeared to have been made from horse hair tied upon a stick.

I was unsure if this huqin I was looking at was crude or masterful, but I do know that this instrument came right out of nature. Everything about it was handmade, and assembled with more than a touch of innovation. I did not ask how old it was, and, as the design and materials were timeless it was impossible to tell. What I do know was that it sounded like it was suppose to.

Various types of huqin are popular throughout China. They are incredibly simple instruments, and are often played by beggars in the street. But the man who was playing it in front of me wan’t just scrapping strings for coins: he really knew how to play it. I’m unsure if I ever watched someone in China play this type of fiddle with better precision. I had to remind myself at one point that the instrument that was resonating sounds through the temple was just two strings attached to a stick that was stuck in a drum that was stroked with horse hair.

Called the “Chinese oboe,” a musical instrument known here as a suǒnà hung from a pillar of the temple. It had a long, wooden body that terminated at a detachable metal bell. The top of which had a brass attachment within which a reed was placed.

The sound it makes can only be described as a controlled squeak. I watched as a few of the musicians assembled along the side of the temple and all began playing these oboes together. The sound which resonated from them was “trumpet-esque” in the way they totally took control of the melody.

I have no idea what this instrument is called, but its sound is somewhere between a Jewish shofar and a trombone. It is essentially a retractable brass tube with a magnificent bell at the bottom. The musicians were either proud of the fact that it was made in Taiwan or they were trying to tell me that it originated here. Watch the video below to hear the sound of this instrument, it’s impressive.

Drums, cymbals, and small, hand-held gongs. The above photo shows a type of miniature gong in a wooden frame. Watch the below video to listen to the various types of percussion instruments.

The lute in the above photo is called a Yuèqín. In the West, this instrument has been dubbed “moon guitar” because of it’s hollow circular body. It has four strings, but they are tuned in pairs like a mandolin. An interesting note about Chinese lutes is that the strings rise high up off the neck and are not meant to be pressed down too the fret board (like a guitar). This allows the player to be able to control timbre and intonation — though it makes playing chords difficult.

Huqin fiddles, suona oboes, the lute, and many of the other traditional instruments of China actually evolved from earlier instruments played by people in Central Asia. In fact, many of them were introduced to China via the Silk Road, but, as with so many other things, the Chinese absorbed them and made them their own.