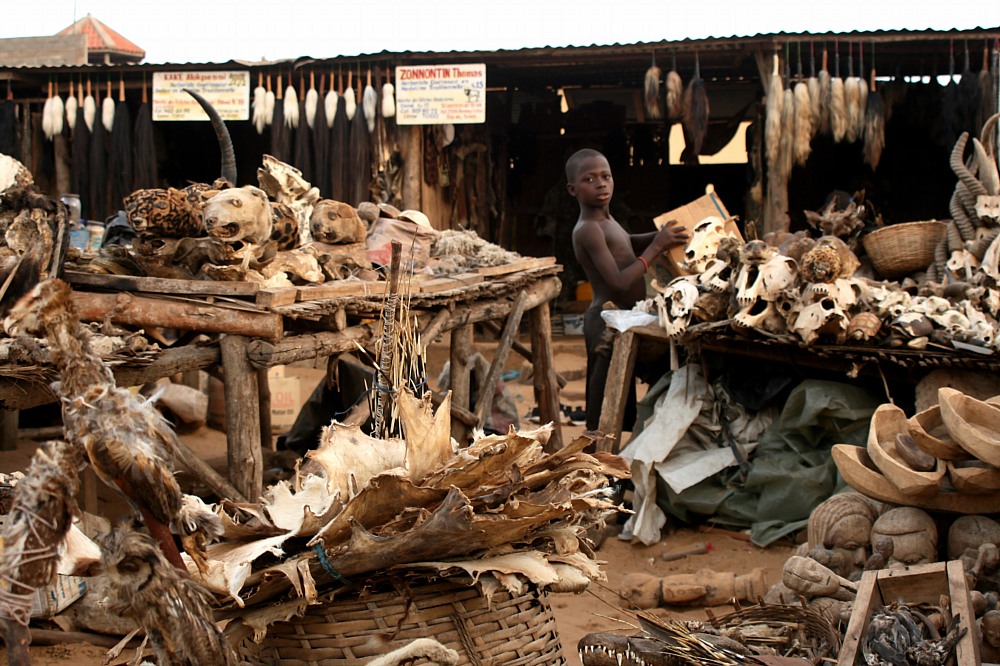 While traveling through West Africa, Tom Coote is lured into Lome’s fetish market. He leaves less than enchanted.

Published on May 18, 2014 by Tom Coote Follow me on Twitter here.
Support Tom Coote’s writing on this blog:

After a short but hot and bumpy taxi ride across Togo’s capital city, Lomé, we pulled up outside the wooden gates to the voodoo market and somewhat reluctantly coughed up the over inflated entrance fee for tourists. I had expected a typically crowded, bustling African market place but it was just a dusty car park with a line of wooden stalls up against the far side. Stacked in amongst the lines of what looked to be crudely made tourist trinkets and other assorted junk, were shriveled monkey’s heads, animal skins, squashed lizards and tangles of slightly moldy looking snakes. Some of these magical ingredients would be incorporated by marabouts into malevolent juju rituals while other fetishes would be purchased in the hope of gaining luck, love or money. Many poor West Africans – rather than investing in education, health or housing – would rather spend what little money they have on fetishes that they believe will bring them good luck in exams or bring them fast, easy wealth. If these magically imbued trinkets fail to deliver upon their promises, then it is because they failed to invest enough; if they do get lucky, then this only serves to reinforce superstitious belief, and such illusions of power can quickly become addictive.

It is not only the poor and the powerless that fall under the spell of voodoo and witchcraft: many of West Africa’s leaders and wealthy elites are drenched in the bloody and sacrificial culture of juju-marabou. When a shiny new BMW pulled in through the gates, the stallholders abandoned their grisly collections to us, and rushed over, into a rising storm of dust. Apparently they were rich Nigerians who regularly journeyed to the Fetish Market. They were known to spend up to US $10,000 in a single visit. Such huge amounts of money, being offered for particularly rare or powerful magical ingredients, acts as a great temptation to the poor and powerless: in Liberia and Sierra Leone, bodies have often been found, emptied of their organs, and the trend in East Africa of murdering albinos for their hearts and livers has recently spread to Ghana.

A number of influential West African leaders, such as Gnassingbé Eyadéma (Togo), Foday Sankoh (Sierra Leone) and Charles Taylor (Liberia), appear to have deliberately cultivated a magical mystique in order to inspire both fear and awe. Eyadéma regularly consulted diviners, had a live in savant, and was widely believed to be able to kill through mystical powers. When he survived a plane crash in 1974, he insisted that he had been saved by the spirit Gu (Ogun), to which he sacrificed all-white animals (while at the same time also claiming to be blessed by the Christian God). Sankoh believed that massive human sacrifices and ritual murders had made him so powerful that no bullet could ever penetrate him. He also claimed to have the power to simply vanish into thin air.

Between 1991 and 2002, a powerful mix of juju-marabou and drugs led to around 500,000 Sierra Leoneans being murdered, raped or mutilated. Many of these atrocities were carried out by child soldiers – the rebel leaders would open up scars across the children’s faces and heads, before rubbing cocaine directly into their blood stream through the open wounds, then unleashing the frenzied juveniles upon their ‘enemies’. Liberia’s Charles Taylor was also notorious for his involvement in human sacrifice and ritual murder. When his rebel army, who wore magical amulets to protect them from bullets, finally took control of the capital, Monrovians were shocked to see these rural invaders ripping out and eating their victims’ hearts.

Once the wealthy Nigerians had left with whatever they had come for, the Vodusi led us into a poorly lit back room and sat us down. They handed each of us a wooden bowl and proceeded to hold up a series of fetishes that they had blessed, giving a brief explanation of each object’s special powers before dropping one of each into our bowls. One of the fetishes was an ugly little figure with a sprouting of dried grass hair, which was supposed to protect your house. Another one was a special necklace made up of 51 herbs – they seemed a bit vague about what that was supposed to do. They were all poorly made.

I really wasn’t sure what I was doing in there but it all became clear when they asked us how much we would like to pay for the contents of our bowls. I told them that I wasn’t interested, as politely as I could manage, and handed back the wooden bowl. The ‘priest’ looked a bit disappointed in me and placed a small pendant in my hand as a ‘gift’ which he assured me would guarantee good fortune when travelling. He then asked me how much I would like to donate and made a polite suggestion of an appropriate amount that was clearly absurd. I handed that back as well. I didn’t need it – the Gods of Travel were already with me. They then asked me to leave the room so that they could talk to Dave in private. A few minutes later he emerged clutching a small plastic bag containing two small, crudely knocked up fetishes. He had somehow managed to bargain them down from 60,000 to 32,000 CFA (about US $45). Apparently he had always wanted to own a ‘genuine’ voodoo fetish.

———————————–
This story is an excerpt from the author’s new book, Voodoo, Slaves, and White Man’s Graves: West Africa and the End of Days. Get it now from Amazon USA or from Amazon UK.

About the Author: Tom Coote

Tom Coote has written two full length books, Tearing up the Silk Road and Voodoo, Slaves and White Man’s Graves and travelled to well over a hundred countries. He also co-founded Wicked World Magazine and regularly updates his own web site at www.tomcoote.net. Tom Coote has written 1 posts on Vagabond Journey. Contact the author.

Support Tom Coote’s writing on this blog:
0 comments… add one