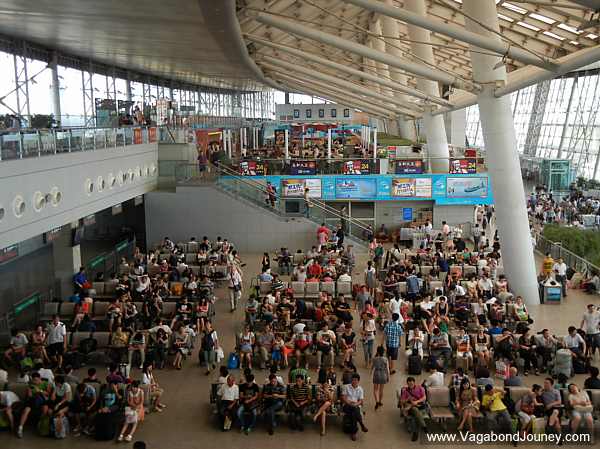 Personal Space in China: If There’s a Free Space, Take it

I’ve been to some pretty crowded restaurants in China before, but this noodle house was so crowded that each person sitting down eating had a person or two standing up behind them waiting for them to finish. Everybody was packed eave to eave inside the dining area like fans at a concert. The crowd extended all the way out of the door, where a mass of people were trying to squeeze inside.

I’ve heard of places like this before but I’ve never eaten at one — and was probably with good reason. But as I walked through the old French quarter of Shanghai, affordable restaurants seemed to be at a premium. There was definitely a reason why everyone was going into this noodle house for lunch, and it was more than likely because there wasn’t many other options.

I fought my way inside the small restaurant with my family, yelled our order to a girl at a cash register, tossed over some money, and took our ticket. We then pushed through the mass of eaters and people standing behind the eaters waiting for their seats until we came upon a young couple who seemed to be at least half way done with their soups. We stood behind them and watched as they lifted each chopstick full of noodles up to their mouths and slurped them in. We staked our claims to their seats, and we had to defend them boldly as there were others plastered up against  our backsides envious of our advanced position.

There had to have been more than 150 people stuffed inside the smallish restaurant, and it seemed impossible for more individuals to be added to this mass. But the crowd at the door kept pushing in, and somehow the room kept taking them in. As I watched this scene unfold I could not understand how all this madness and apparent chaos churned so smoothly and peacefully.

If there’s a free seat, take it.

I was sitting by myself at a table with four seats in a Shanghai McDonalds enjoying a double cheeseburger when a group of three young Chinese adults quickly approached and deftly filled my table’s vacancies. They did not ask if they could join me, they just plopped their food down on the table and took their seats. I could not be offended here, as nothing in this action could be considered rude in the context of a crowded restaurant. If there are no empty tables, sitting down in the vacant seats of someone else’s is just normal here.

I offered a string of greetings to my uninvited dinner companions, they returned them, and everyone returned to their respective little worlds: the three of them chatted among each other and I remained sitting there all alone. Though conversation would not have been a social taboo, it was in no way expected. Though we were sitting in very close proximity to each other and sharing the same table for a meal we may as well have been sitting on opposite sides of the restaurant.

Chinese culture is amazing in the fact that people can socially function literally on top of each other but remain very much in separate spheres of consciousness. Perhaps this is a necessary social mechanism for living in such close proximity to so many people. When you’re constantly surrounded by a sea of people it becomes easy to tune them out. In cities, human and landscape blend together.

Earlier this year I stopped for a meal in a food court style eating house in Manhattan. The place had a bunch of fast food vendors side by side in a row which shared a common seating area. I ordered up a tray full of food and turned around to find all of the tables taken. I had a choice: I could stand around like a loser with my food getting cold as I waited for a table to be vacated or I could just sit down at someone else’s table and eat.

I chose the later, and took an empty seat at a table that had a man and woman sitting at it. Their conversation immediately ceased, and they did not check their annoyance at my intrusion. I ate my hot dogs in peace, they scowled at me. I ruined their lunch, but enjoyed my own.

The overly polite, respect for personal distance aspects of Western culture often turns us stupid. We respect everyone’s bubble of personal space to the extent that we often find ourselves crowded out of unfilled rooms. It is amazing to walk through an airport in the USA and marvel at how many people choose to stand than sit right next to someone they don’t know. It is baffling to walk through an American park and observe how uninclined people are to even go so far as to share a bench with a stranger. Our fear of sharing personal space has made us socially awkward, pensive, suspicious, and distant.

Fast forward to China and I’m normal. I walk into a noodle restaurant that’s packed and I sit down with people I don’t know and eat noodles with them. I strike up conversations with people I don’t know. I ask people questions that I want answers to. If a girl has a pretty hair style I tell her, if she’s wearing a nice dress I say, “That’s a pretty dress.” I’m neither a social butterfly nor a conversational predator, but I have no reservations when it comes to talking to the people around me.

People here know how to exist in large crowds.

There is a certain pragmatism that runs down the center of Chinese culture when it comes to crowding and personal space. It’s my impression that, when possible, the amount of personal space that people allot to each other here is not that much different than in the USA. The difference is that Chinese people seem to know when and how to tighten these spaces up when the need arises — as it often does. If there’s enough room for everyone to exist in a room, everyone spreads out and gives each other as much space as any Westerner would. If there are additional seats available somewhere, people won’t sit next to each other; if there is a table free in a fast food restaurant, nobody is going to sit down with you. But when places get a little crowded everyone pops their personal space bubbles and squeezes in tight.

If there is one thing that people in China understand it’s that there is a lot of them. This country is packed full of people but this culture has ways of managing this incredible population. It’s truly amazing how compact a relatively large number of Chinese people can make themselves. It’s like they can deflate themselves and fit together like a puzzle, becoming a single massive entity. Just ride the Shanghai or Beijing subway at rush hour to watch this phenomenon at work: elbows fit in against abdomens, knees go between legs, fronts are placed flush against backs, and heads fit nicely in armpits. Nobody complains, nobody yells, nobody whines, everybody just fits together and moves in unison. At stops, when people get off and on, the effect is like stirring a stew of people: the mass rotates and those getting off are ladled out through the doors and those getting on take their places. This is a culture that can assemble itself together in a contiguous mass, break apart, and reassemble itself again with ease.

Learning how to be comfortable flowing with these rivers of humanity is an essential part of living and traveling in China. Swim against the current, and you get nowhere.

I am the founder and editor of Vagabond Journey. I’ve been traveling the world since 1999, through 90 countries. I am the author of the book, Ghost Cities of China and have written for The Guardian, Forbes, Bloomberg, The Diplomat, the South China Morning Post, and other publications. VBJ has written 3653 posts on Vagabond Journey. Contact the author.