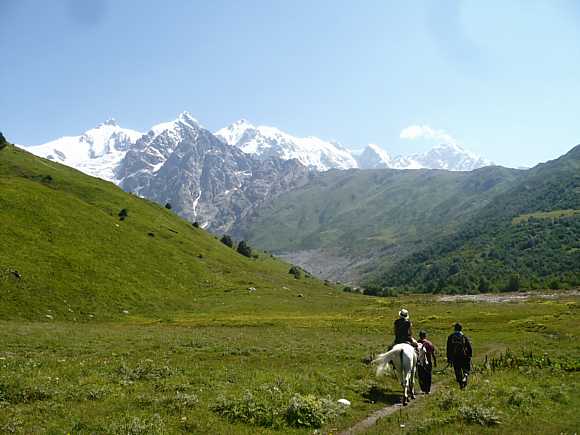 Georgia vs. Armenia: Which is Better for Travel?

When traveling through the Caucasus, where should you go? Felix tallies up the score.

Published on September 24, 2012 by Felix Gervais

This summer I visited Armenia and Georgia, two countries that are not major travel destinations yet, but are getting increasingly higher traffic. And that’s deserved, because they both rule. Interesting historical sites and ruins, low prices, wonderful nature, friendly locals, an overall very safe environment, and easy access in and out, as both countries are served by decently-priced flights from Europe and (unlike their fellow post-Soviet Caucasian neighbor Azerbaijan) have gotten rid of the painful bureaucratic visa application procedures*. Both Georgia and Armenia are worth visiting and spending a lot of time in, and while they are obviously very similar in some ways, they are not twin brothers at all.

A lot of people asked me to compare them, and I figured that it would be a pretty good idea to do so. Below you’ll find a criteria by criteria comparison of each country combined with a point system — as if this was a contest. So let’s do it!

Georgia wins this one. Unlike a lot of travelers who find Yerevan, the capital of Armenia, is bland, I did enjoy its vibe, central square, convenient size and superb national museum, but Tbilisi is on another level. Yerevan is an average capital and a good transportation hub; Tbilisi might be one of the most underrated cities in all of Europe.

OK, OK, maybe it lies technically in Asia, but culturally and ethnically I consider Georgia to be way more Eastern European than anything remotely Asian. Its old town is full of rough edges and reminds you at every street corner that people actually live and breathe there, as opposed to some old towns that feel like Disneyland, and the more modern parts have a very interesting vibe to them as well. There are lots of cultural gems here to be harvested. Truly, Tbilisi is a place where one can walk for hours, get lost several times, and keep walking.

Again, the point goes to Georgia. And once again, it’s not because Armenia is lackluster — with its terrific hills, gorges, forests, lakes and what not — it’s just that Georgia is way too damn good. Fans of hiking might go into bursts of convulsions upon seeing the peaks of Kazbegi and Svaneti, those places are insane! Georgians think that their country is the most beautiful in the world, and frankly I can hardly think of places that rivals it.

Georgia is extremely affordable and will break your bank only if you splurge stupid. Armenia, meanwhile, is truly a CHEAP country to visit. On several occasions during the first few days travelers will wonder “What the hell?! Is it really THAT cheap?” upon being quoted a price, as they mentally calculate the conversion rate once more just to make sure. Getting around by marshrutka (15-seat vans), eating locally bought food, using the same water bottle and refilling it at public taps, and staying in local homestays can set one back less than $15 a day. Sure, some of the incredibly low costs are a result of the recovering economy and ethical travelers shouldn’t abuse of it, but it does feel good not to have to watch the finances too closely, even when on a budget.

This one is not even close. Georgian food is interesting, hearty, varied, and always served in copious portions. Sitting here typing this, my mouth is watering at the idea of having a huge khachapuri, the home-style cheese-filled flat bread that is their most famous and ubiquitous staple. They also have surprising variety in their stews, eggplant-based dishes, salads, dumplings, and combined with their incredibly fresh produce and world-famous wine, every meal becomes a culinary adventure.

Armenian food, on the other hand, is… meh. You can eat well in Armenia, of course, but the choice tends to be either some greasy kebabs or pizza slices from street stands, or some Russian restaurants that serve good grilled meat and that’s it. Home-cooked fare ain’t that spectacular either, mostly “functional” food without much flavor or originality to it. And Armenians are not people that eat out a lot, so there are very, very few restaurants, unlike in Georgia where a lot of little cafes serve awesome food. Georgia gets double points for this one (quality and availability).

Both countries have an official language that is unrelated to any lingo you might know, difficult to pronounce, and written in a completely foreign-looking script. Also, the quasi-totality of locals speak perfect Russian, a heritage from Soviet times, and surprisingly don’t mind using the language at all even among themselves — despite the frictions they have with the Russian government (especially Georgia). A few phrases of Russian will get you very, very far.

However, just as in every country where Russian is spoken (in Central Asia, Ukraine, and of course Russia itself) English is not widespread at all. It’s as if English and Russian were mutually exclusive! Some guidebooks might say something along the lines of “the new generation speaks English as a second language rather than Russian” but that is complete bullsquash. You will encounter locals who know English in ecotourism areas, some homestays, and the odd University student or returning expatriate, but don’t ever ever expect any random person to speak it.

So, who gets the point for ease of communication? Tough call. Georgia has more tourists you can tag along with, and among them LOTS of Poles and Israelis who are very likely to speak at least broken Russian and help you get by, but Armenia has a large returning diaspora and therefore you are very likely to encounter locals who speak native-like English (or French, German, etc.) more often than in Georgia.

What!?! I am a heterosexual single male, and it’s not a sin to merely look.

There are chicks in Georgia, just like every place in the world that doesn’t start in “On” and end in “tario,” but the ladies of Yerevan are complete stunners. Period. Point Armenia.

Armenians will remind you every time: their country is the first ever Christian nation. I am far from being a huge fan of organized religion myself, but the branch of Christianity encountered in Armenia (and the one in Georgia, similar but not quite identical) is not the obscene, in-your-face, obtrusive Jesus-this, Jesus-that found in the USA. Non-spiritual travelers are left alone, but can still immerse themselves in the cultural aspects of the religion that are omnipresent in the area.

There are numerous monasteries, and in my humble opinion, the Armenian ones are cooler than their Georgian counterparts. A lot of them are way out and you need to go on a long hike to even reach them, but once you do you have the whole place to yourself. And they are all free to visit, unlike a few in Georgia where some clever money-grabber decided to impose an entrance fee. More on that below.

This one is a delicate one, and is very subjective. Bluntly, Georgia is more touristy than Armenia. As soon as you leave Yerevan you are way out of any “Western backpacker” beaten path.

That ain’t to say that Georgia is like Koh Phi Phi, Venice, Cuzco or any other similar shithole, but it’s undeniable that some parts of the country are heading (in my very humble opinion) in the wrong direction. Mestia, the hub for trekking in the otherwise fantastic Svaneti area, is, as of 2012, nothing more than an ugly pile of rubble and construction waste as they are building large hotels. The place might soon become a theme park, even though not more than six years ago it was a completely unspoilt (but granted, dangerous and bandit-ridden) area. Don’t get me wrong: Svaneti deserves tourism. It just needs to take it easy on the over-development, something that is of course hard to fathom when you go from a remote untouched area to a haven for backpackers who come by the dozen almost overnight. Time will tell… but for now, even at the time of my visit, the greedy attitude towards foreign tourists had already begun to point its ugly nose, with random farmers asking 50 lari ($30!!!) to open a church door, and jeep drivers asking the equivalent of a monthly Georgian salary for a two-hour ride. That is a small minority, as every single person without exception in non-touristy areas, and the vast majority in touristy areas, aren’t like that, but it does happen and leaves a bad taste in the mouth. Even with all ethical considerations from me, being fortunate enough to hail from a rich country and travel for pleasure and blahblah, I can’t approve of that, and thus must give the point to Armenia, where it doesn’t cross the mind of the common folk to even try ripping off foreigners.

So, when all is said and done, the final score is:
Georgia 4 Armenia 4

I wouldn’t have seen it any other way, as I had an equally good time in both countries. So do yourself a favor, and go check ’em both out for yourself!

*About visa procedures, or lack thereof: Georgia is visa-free for most nationalities, and an Armenian visas cost 3000 drams ($7!!!) and are available on arrival at any point of entry — a two-minute thing.

Filed under: Armenia, Georgia, Russia and the Caucasus

About the Author: Felix Gervais

Felix likes extreme music, cooking spicy food, riding bicycles, drawing comics and going to weird places. He is currently on a never-ending quest to find the best 麻婆豆腐 in all of China. Felix Gervais has written 11 posts on Vagabond Journey. Contact the author.

Previous post: Why do the Chinese Hate the Japanese?