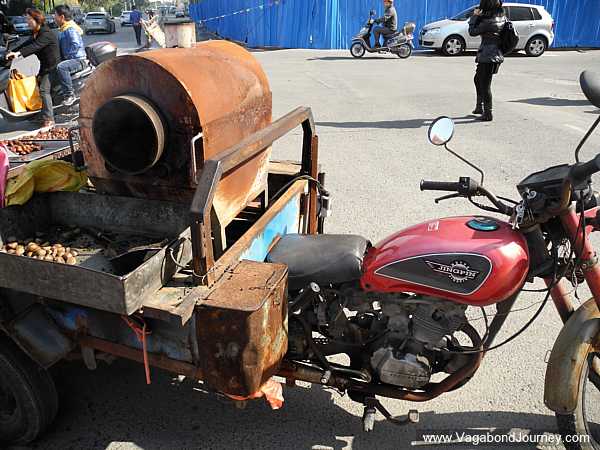 Chestnut Roasting Taken to the Streets in China

As autumn turns into winter street vendors come out across China cooking chestnuts in the streets with interesting roasters attached to motorcycles and tricycle carts.

Published on January 11, 2013 by Wade Shepard Follow me on Twitter here.
Support Wade Shepard’s writing on this blog:

If something can be made and sold in the streets, it probably is somewhere in China. Just about wherever you go the informal economy is there. This is never more the case than with food, and vendors line the streets peddling quick bites to eat throughout the urban landscape.

When the season begins turning cold and autumn blends into winter, the chestnut vendors come out in force, roasting their wares and selling them in the streets. The roasters are often set up on shelves connected to the backs of motorcycles, on cargo tricycle, or they are wheeled around on carts by hand.

The chestnut roasters themselves are generally more complex than many mobile street food kitchens, potato ovens, portable stoves, and even the old-fashioned pressure cookers that people cook street food with in China, as they consists of an outer metal shell that covers an internal cylinder that spins like a clothes dryer under, I assume, battery power. The chestnuts are loaded into this cylinder along with a blanket of coal flecks, and are heated from below. They are then rotated until cooked, and then chestnuts are then scooped out and separated from the coals.

The following photos and video are of a portable chestnut roaster set up on the back of a motorcycle in Taizhou.

Chestnut roaster on the back of a motorcycle

The amount of innovative and interesting machines that the Chinese use to cook street food seems nearly endless. Just about every time I step out of my door I stand to find someone in the street cooking up food with some odd contraption that I’ve never seen before. This article is part of a collection of photos and documentation about Chinese street food cookers, as they are machines, devices that could easily not be passed on to the next generation and fade into history as China continues modernizing.

Wade Shepard is the founder and editor of Vagabond Journey. He has been traveling the world since 1999, through 90 countries. He is the author of the book, Ghost Cities of China, and contributes to The Guardian, Forbes, Bloomberg, The Diplomat, the South China Morning Post, and other publications. Wade Shepard has written 3591 posts on Vagabond Journey. Contact the author.

Previous post: Shenzhen, China: Where Your Stuff Is Made