ZIPOLITE, Mexico- “I’ve heard that around 50 people a year drown in these waves, that is like a person a week,” a young tourist informed me on Zipolite beach one sunny day. We both looked off into the waves — they were rising around four feet up from the ocean surface before quickly crashing into [...]

ZIPOLITE, Mexico- “I’ve heard that around 50 people a year drown in these waves, that is like a person a week,” a young tourist informed me on Zipolite beach one sunny day. We both looked off into the waves — they were rising around four feet up from the ocean surface before quickly crashing into the beach below. He then ran into the giant waves to show off. I walked away, unimpressed.

“Zipolite is one of Mexico’s three death beaches,” a hotel owner in Puerto Angel told me before venturing to Zipolite, a few kilometers to the west. She then told me a story of an Italian couple who took their honeymoon to the Oaxaca coast. The hotel owner told them to beware of swimming in Zipolite, the  Italian guy’s machismo usurped her warnings. This couple, together, was taken away in an undertow. The girl surfaced, her newly wed mate did not.
[adsense]

This is the rumor in this stretch of Oaxaca coastline: Zipolite is one of Mexico’s three beaches of death, stay out of the water. Zipolite ranks as one of the deadliest beaches in the entire world. But I look out to sea here and see lots of people bobbing about and being slammed down by the waves, surfing, body boarding.  The waves here are huge — huge and beautiful — and hundreds of people swim in them daily. 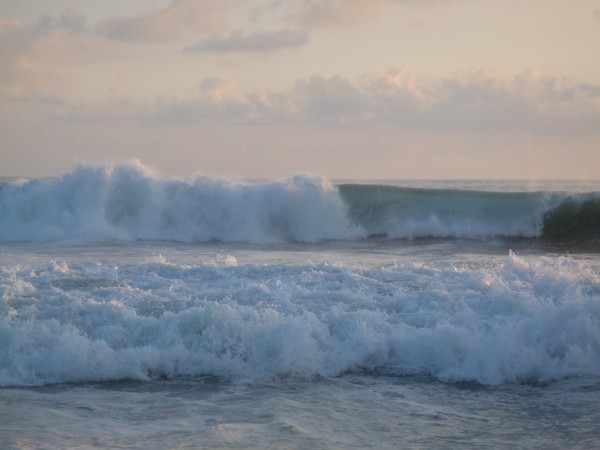 I resolved to find out — really — how dangerous swimming on Zipolite beach is. I asked an older American hotel owner who had been on this beach for around 15 years.

“Is it true that fifty people drown here a year?” I asked.

He laughed at my rumor mongering, and stated, “That was in the old days, we haven’t lost anyone in three years now.”

“So it is safer to swim here now than before?” I questioned, wondering how this could be. The hotel owner then explained that subsequent to a few major storms that hit Zipolite in the late 90’s and early 2000’s, as well as one that struck last autumn, a large portion of the beach eroded away.

“This beach use to go out a football field from here,” he explained.

I looked out to find the surf occasionally fizzling out not five meters from the foot of his hotel.

This erosion, while causing severe damage, had the effect of leaving behind a safer beach. The owner explained how there use to be a 5 meter drop off that occurred abruptly out in the surf that is no longer there.

“When I would come here as a tourist, I would make ten rescues a day,” the hotel owner explained, “but it was naked rescue then so it was more fun.”

We laughed at this. 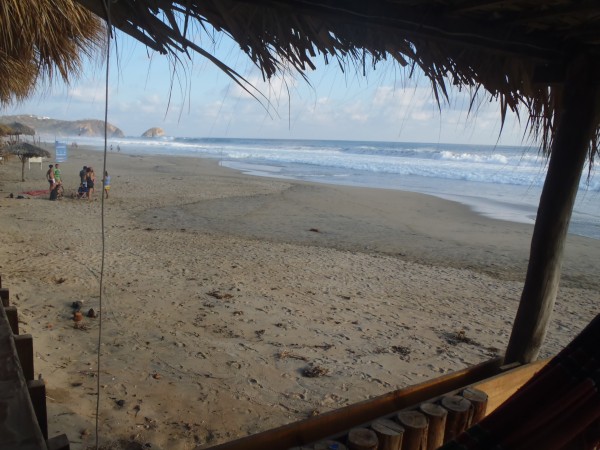 Photo taken from business line at Zipolite Beach, the water is rising as the beach erodes.

But the fact that a volunteer lifeguard was formed in 1995 probably also has something to do with the drop in drowning deaths at Zipolite. The next year after this force was assembled, drownings were cut in half. Now it is very rare for someone to drown here. The team of lifeguards are very active, riding up and down the beach on an ATV, watching from towers, and yelling at tourists who swim too far out. They also make rescues nearly every day.

The combined forces of natural erosion and human pro-activeness has made Zipolite beach a vastly safer place to swim, but the fact remains that the lifeguard crew still needs to make rescues daily. Although drowning is now a rare occurrence, people are still taken away by the undertow with regular frequency. And there is rumored that I have not been able to substantiate that a drunk guy swimming at night did drown on this beach a couple of months ago — but drunk guys often find ways to drown almost everywhere their is water.

I approached my New Zealand friend Luke — who has been living on the beach for the past three months — about the true dangers of swimming at Zipolite. He is an active sort of guy, strong, in the prime of manhood — a decent swimmer. He told me about how he, himself, was taken away by an undertow while swimming near the rocks on the western flank of Zipolite beach. He told me that he was standing in the shallows and was taken off his feet and pulled out to sea. While caught in the chest high channel of water he could still occasionally toe the ground surface, but there was little he could do except ride with the current out to sea, swimming perpendicular to it where he could. He eventually was able to get out of it, as the currents here are not wide, but he offers a warning:

When swimming at Zipolite, stay away from the rocky ends of the beach, as this is where the currents are the strongest: stay in the middle. 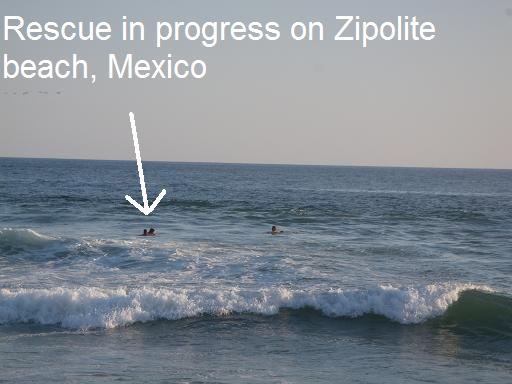 Woman being rescued by lifeguards in Zipolite

A Mexican woman wailed from out in the waves on Zipolite beach. She, apparently, thought she was drowning. Perhaps she was. She was calling for the lifeguards to come and save her. They did.

I stood on shore and watched the scene. The woman was way far out in the waves but appeared stationary, it is not my impression that she was caught in a rip tide — only swam out too far for her comfort. The waves at Zipolite beach are large and break hard. This woman had positioned herself right where they crash the hardest. She was yelling for help, and two lifeguards rushed to her aid. One swam out to her from shore, the other paddled to her from out in the waves on a surf board. The two lifeguards convened upon the woman and helped her back to dry land.

This woman was saved. The entire ordeal started and ended in under two minutes. Beach life hardly had time to take a break from business as usual. 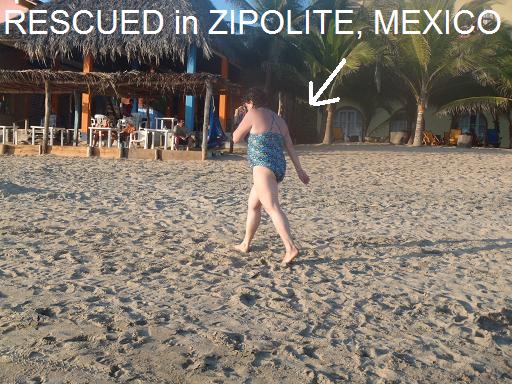 One of many people rescued by the lifeguards at Zipolite

But rescues here on Zipolite are business as usual. The lifeguards record hundreds of rescues, but I am sure that ten times as many go undocumented — swimmers in need being rescued is just too much a part of the scenery to get fancy about. It is estimated that these lifeguards make over ten such rescues a day, most of them are quick and simple, as was the case with this woman who swam out too far and needed help coming back to shore. 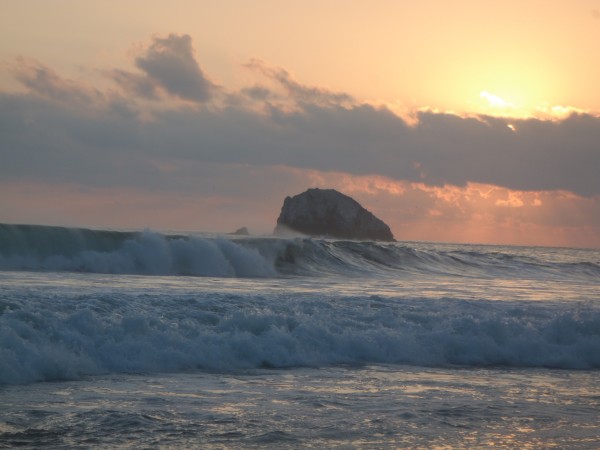 Bad reputations about places often linger long after changes have occurred to thwart their actual causes. Places have the tendency of changing faster than their reputations can keep up with, and the guidebooks can not be trusted to keep up with this. To the easy listener, Zipolite is still a beach of death, with 50 drownings per year. In actuality, Zipolite is a slightly dangerous beach with active lifeguards, a beach where rescues are frequent but drownings are rare.

In travel, rumors need to first be substantiated prior to being repeated. Personal impressions, conversations with knowledgeable locals, common sense, measuring up what you see and observe against what you are told by some guidebook toting tourist means everything. Common sense is often the king initiator of discovery: would hundreds of people be swimming at Zipolite if a person a week drown? Maybe; maybe not. When I am told that something is dangerous, I ask where the person telling me this got their information from. If they say, “I’ve seen it,” I bow my head and take their advice with more weight; if they say, “I’ve read it,” or “I’ve heard it,” I pocket their words in temp storage and use them as an impetus for further confirmation. 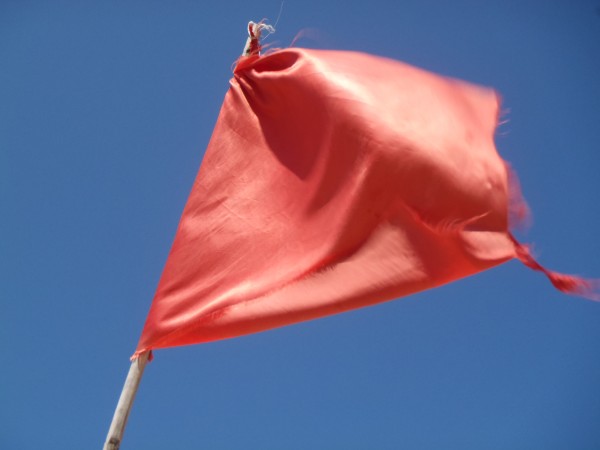 Red flag on beach means dangerous swimming. Sort of pointless, as 9 out of 10 days these red flags completely line the entire beach of Zipolite.

The people who don’t know are all too often the most eager to regurgitate scraps of third and forth hand information. Humans seem to have a deeply rooted reaction against the unknown, so we mask ourselves with bullshit and removed from the source scardy cat warnings (hang out with a group of tourists sometime if you don’t believe me). Fact check everyone, fact check me, fact check this travelogue with your own first person sources and observations. Come to Zipolite, ride the waves, get caught in an undertow, make observations, ask questions, collect whatever information you can, find out for yourself, and then tell me how dangerous it is. I will listen.

The person who doesn’t do is the often the first person to tell you that you can’t. This goes for just about everything called dangerous in travel. A menagerie of information needs to be collected on a potential travel danger for a traveler to assemble a real picture of what they are up against. In this entry I show how I collected information about the dangers of swimming at Zipolite beach. I received various snippets of information from tourists, websites, locals, those who have experienced the dangers first hand, and then I wove them together with my own observations, impressions, and experience to come up with an inference on the impending dangers that I would face if I went into the water.

I did go into the water and swam in the waves — like everybody else who comes to Zipolite.

The methodology that I applied to discovering the dangers of this beach can be applied to just about anything else called dangerous in travel.

Next post: Bicycle Touring and Travel in New Zealand Interview