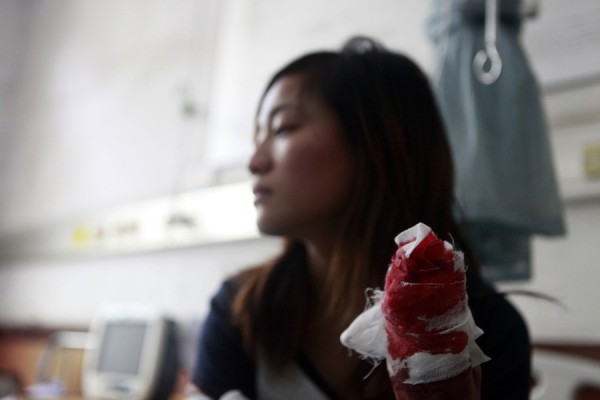 Woman Has Finger Cut Off for Littering in China

A fed up sanitation worker takes the fight against littering into his own hands, and cuts off the finger of an unsuspecting litter bug.

Throughout each day in the cities of China you can hear a steady soundtrack of plastic bottles, candy wrappers, styrofoam take out containers, and other types of garbage bouncing off the pavement after being purposefully thrown out of car windows or carelessly dropped by pedestrians. Knowing the propensity of their culture for littering, China has virtually armies of street cleaners who pick up garbage and properly dispose of it almost as soon as it hits the ground. An apologist for this habit, which many Chinese people formally regard as disgusting and uncultured, could say that littering here creates jobs for hundreds of thousands of street cleaners — but this was clearly not the opinion of Guo Nengfang, a 33 year old sanitation worker, when he spotted a young couple littering on the morning of November 3rd in Hunan Zhuzhou.

Guo watched as a couple crassly threw the remains of their breakfast out of the windows of their van for him to clean up. He then approached the vehicle and demanded that they pick up their own litter. The couple refused. Taking out a knife, the enraged street cleaner then opened the driver’s side door of the van and began hacking at the young man inside. Instinctively, the man’s wife reached across from the passenger’s seat and tried to protect him from the attack, and in the process had her middle finger chopped clean off.

The attacker was promptly arrested and the injured woman was rushed to a nearby hospital.

While this is surely one way to get Chinese people to stop throwing their garbage on the ground, it is my impression that if this method was carried out by more embittered sanitation workers the streets of China would be littered in fingers rather than garbage.

What is perhaps most surprising about this incident is how Chinese netizens reacted to it. Rather than overtly condemning the man who stepped beyond the law and cut a body part off of a woman for a minor infraction, the common opinion had a rather vindictive and even empathetic tone to it — some went as far as to show the sanitation worker as a victim making a heroic stand against insolence.

Comments from Netease and QQ, translations taken from China Smack:

A lesson learned in blood! If you don’t show understanding for other people’s hard work, they’ll let you have a taste of barbaric violence!

Littering is admittedly a problem of morality and character.
But “first floor” [the above commenter], you supporting the sanitation worker’s actions like this, isn’t that a little too extreme?
According to [your] logic, those people who cross the street during a red light in the future should also be given a lesson in blood?
According to [your] logic, for the customer who enter a store and is slightly rude and unreasonable in the future, the salesperson should also give him a lesson in blood?
According to [your] logic, if your kid has a conflict with classmate in the future, and your kid is in the right, you’ll also go give your kid’s classmate a lesson in blood?
This matter has nothing to do with the sanitation worker’s hard work. Them littering is admittedly wrong, but it’s not deserving of having their fingers cut off. Moreover, they only broke the rules/regulations, not even the law!

The one cut off was the most useful.

The sanitation worker cutting off her finger was so wrong, how can you cut off someone’s finger?
With people like this who litter and still refuse to pick their trash up after being reminded, you should cut off her hand.

The tossed “a bit” of garbage is the highlight.

[She] indeed should improve her character and respect other people.

Sanitation workers have always been the group of people I respect the most in my heart… because they serve the people through hard labor, the wages they receive being very low, their job being the dirtiest and the toughest and are not respected by other people. If one street in a city were to be short one of its sanitation workers, then this street would become overwhelmingly foul, so we can’t live a day without them. They start working in the middle of the night. Especially in the coldest winter when we’re in our warm beds, they’ve already begun to work in the chilling wind. In summer under the scorching sun, they still work. They get minimum wage, why? Because our government didn’t give them the respect and treatment they deserve. They serve us for real, unlike many governmental departments that only hang slogans on their doors/buildings for people to see… This time, this is a rookie sanitation worker, he shouldn’t have attacked people with a knife, he indeed was wrong, but he’s just a individual case, so the image of sanitation workers will never change in my heart, and I forever respect you, the loveliest people of all… A netizen of Zhejiang Ningbo Ninghai–小叶.

In the future, we should promote sanitation workers bringing knives to work, and our countrymen’s characters will definitely be higher after a year.

I don’t feel sympathy for the littering woman, but instead sympathize with the sanitation worker. In China’s current national conditions, I must say using this kind of extreme method to solve problems is a tragedy.

Support! Well-cut/chopped! Many people in China are without character like this, thinking they can do anything they want just because they have money! Not thinking about other people, not respecting other people.

The sanitation worker overreacted, but some people don’t respect other people’s work at all, and some individuals even ruin/wreck [other people’s work] deliberately, just for fun. People like this should be taught a lesson, too loathsome!

It’s always been the sanitation workers who get beat/attacked, today one of them strikes back. Sigh, that’s why people say, one should be conscientious of their behavior!

Why chop the hand? Because this pair of hands had done something wrong! The chopping was justified!! Punish one to warn the rest!!

Good, people who litter are as annoying as garbage itself!

What’s your opinion? Let us know below.

I am the founder and editor of Vagabond Journey. I’ve been traveling the world since 1999, through 90 countries. I am the author of the book, Ghost Cities of China and have written for The Guardian, Forbes, Bloomberg, The Diplomat, the South China Morning Post, and other publications. VBJ has written 3655 posts on Vagabond Journey. Contact the author.

Next post: End of an Era: The London Olympic Cleanup