Find out why it is trendy in China for men to grow incredibly long fingernails.

The young guy on the train next to me had talons. Yes, his fingernails extended a quarter to a half inch from the tips of each of his fingers, and, from the way they were finely filed and shaped, it was obvious that this was some sort of fashion statement. In fact, bona fide claws protruding from the hands of men in China is such a normal phenomenon that you just stop noticing it after a while, but as I watched the guy sitting next to be brandishing his grappling hooks it struck me that I have never talked to anybody about this style before.

I had my assumptions about why these guys were sporting such long fingernails, but it is folly in travel to leave your assumptions as they are and deny yourself the possibility of being surprised. You have to question the obvious sometimes and make uncomfortable, strange, and base inquiries. So I asked the young man with claws sitting next to me:

“Why did you grow your fingernails so long?”

He sat upright in a jolt of surprise. “What!?!” he said. Heads all of a sudden popped up from personal mobile devices all around us as our conversation became the new attraction. Not only did the laowai just speak but he asked a very strange question. The be-taloned understood my words but seemed unsure that I really asked what I just did. I had clearly taken him off-guard.

“Your fingernails are very long. Why?” I asked again.

He thought for a moment. It is the most banal cultural questions that are often the most difficult to answer, explaining the obvious is sometimes a surprisingly challenging task. 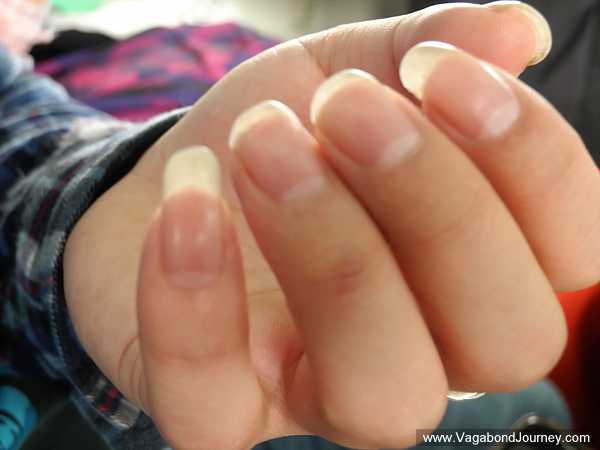 “It is so people know that they don’t do hard work,” another Chinese guy later told me when I questioned him about the long fingernail phenomenon.

If you are out working in the fields or doing manual labor, long fingernails become an obstacle and will often get broken, splintered, or otherwise gnarled. If you sport soft, slender hands with half inch long, well-groomed fingernails it is taken as an indicator that you don’t work with your hands, that you are above the social station of a common laborer, that you live the sort of life that allows the luxury to possess such a pampered set of paws. It was the response I expected. This is not a unique cultural symbol.

But modern China has a culture where many people are transitioning from poor to middle class, or even rich. “To be rich is glorious,” is the rally cry. Being poor here has perhaps never been seen as worse, as there are now more opportunities to socially ascend, and many fashions or bodily alterations are being done to give off the impression of being high class. What is interesting about the long fingernail style is that it costs nothing, and many men seem to be sporting it regardless of class. In fact, it actually seems like more of a popular think to do among young men who were born into working class or peasant families, perhaps as a way of distancing themselves from their toiling predecessors.

Though I have to say that these long fingernails seem to send an out-dated social message. In point, while these talons may inhibit manual labor they also inhibit something else: the use of the trendy, new phones and electronic gadgets that are the hallmark of this planet’s arisen classes. I sometimes watch men with outrageously long fingernails working their phones and typing on computers with a touch of amusement — click, click, click, you can hear the sounds of nails striking touch screens and keyboards. They pull these Scissorhands maneuvers off deftly, I have to say, but watching it happen is almost a marvel akin to a woman running in high heels or a guy in a sleek white suit making it through dinner without dropping or spilling anything all over himself. It is amazing the extents our species will endure for fashion and a feeling of status.

Long fingernail on a Chinese shopkeeper

Wade Shepard is the founder and editor of Vagabond Journey. He has been traveling the world since 1999, through 90 countries. He is the author of the book, Ghost Cities of China, and contributes to The Guardian, Forbes, Bloomberg, The Diplomat, the South China Morning Post, and other publications. Wade Shepard has written 3546 posts on Vagabond Journey. Contact the author.

Previous post: Getting Lost At San Yue Jie, One Of The Biggest Temple Fairs In China

My mother doesn’t think the city life is all that.