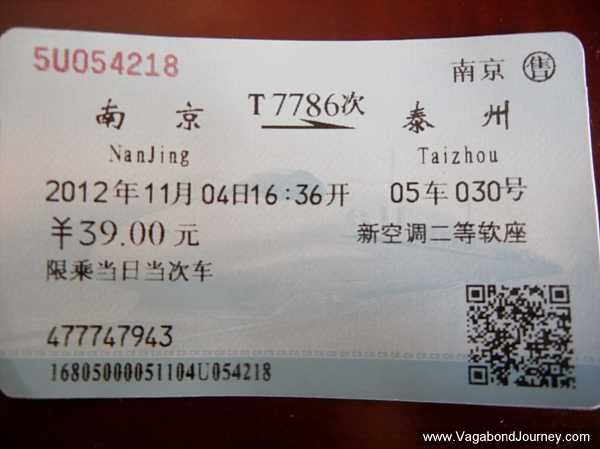 Train numbers in China tell what direction a train is traveling in and how fast it goes. This article shows how.

So you get your ticket and are ready to take a ride on one of the greatest rail lines in the world — you find the waiting room, you get to the platform, and you board the train. But did you know what the number which designates the train you’re riding in actually means?

Each train in China has a route number, which is generally three to five characters long and is typically made up of a letter followed by two to four numbers. These numbers tell passengers and crew alike the direction the train is traveling in as well as how fast it’s going to go.

To begin figuring out what these numbers mean it must be known that all trains either move in an up (shangxing 上行) or down (xiaxing 下行) direction. To move “up” means to travel towards Beijing or, if on a branch line, in the direction of a line that goes to Beijing. To move “down” means to travel away from Beijing or away from the main line on a branch. As far as train numbers are concerned, “up” trains will end in an even number, while “down” trains will end in an odd number.

For example, I recently took a train from Nanjing to Taizhou, and though this was an eastbound trip the train number ended with an even number because it was moving towards a main line that goes to Beijing.

The only trick to this are trains that move both “up” and “down” during the same journey. In these cases, your train will have two numbers separated by a slash — one ending even and the other ending odd. The “down” part of the trip is odd, the “up” part is even. If you travel both parts of the route you get a ticket with two train numbers printed on it. This is incredibly common and can happen when a train either runs away from a main line and then turns north or runs towards a main line and then turns south, among other combinations. For example, the train from Taizhou to Shanghai has the number T7788/ T7785.

So that takes care of the numbers. Now, what does that letter mean?

Each passenger train in China has a service type, or class, and the letter at the beginning of the train number indicates what kind of ride you’re in for. Each service class is dictated by the train’s speed and level of comfort it offers passengers.

G – High speed bullet train. These trains are called gaosu, and can travel at 300km/hr. They are usually white in color with a sleek blue pinstripe running down the sides.

C – Inter city high speed bullet trains. Chengji trains are ones that only go back and forth between two cities, such as between Beijing and Tianjin.

D – Bullet train. These trains are called dongchezu, and, though slower than G trains, are still incredibly fast — clocking speeds up to 250km/hr.

Z – Direct. Called zhida 直达, which simply means direct, these trains take you right to your destination at a speed of up to 160km/hr.

T – Express. This service is called tekuai 特快, and is basically the same as a Z train except for the fact that it makes more stops. These trains are blue and white.

K – Fast. Though they are called kuaisu 快速, which means fast, they really only go up to 120km/hr. These trains are red and white.

Y – Tourist. These lüyou 旅游 tourist trains are distinct from ordinary trains by the fact that they are set up along major tourist routes and generally provide a more posh “soft seat” kind of ride. These are oftentimes temporary trains, and only run when booked by a tourist agency or during the high season for tourism in select locations.

N/A – If a train doesn’t have a letter prefix attached to its number it’s more than likely what is called a normal passenger train. This just means that it goes real slow and stops at a lot of stations.

Each year, the railways of China service nearly 1.5 billion trips along 91,000 km of track. That’s a lot of train travel, and knowing  how to navigate this vast rail network is key to being able to get around China better.