What A Computer Is Really For

Spoiler: It’s not for storing data (as my wife learned the hard way). 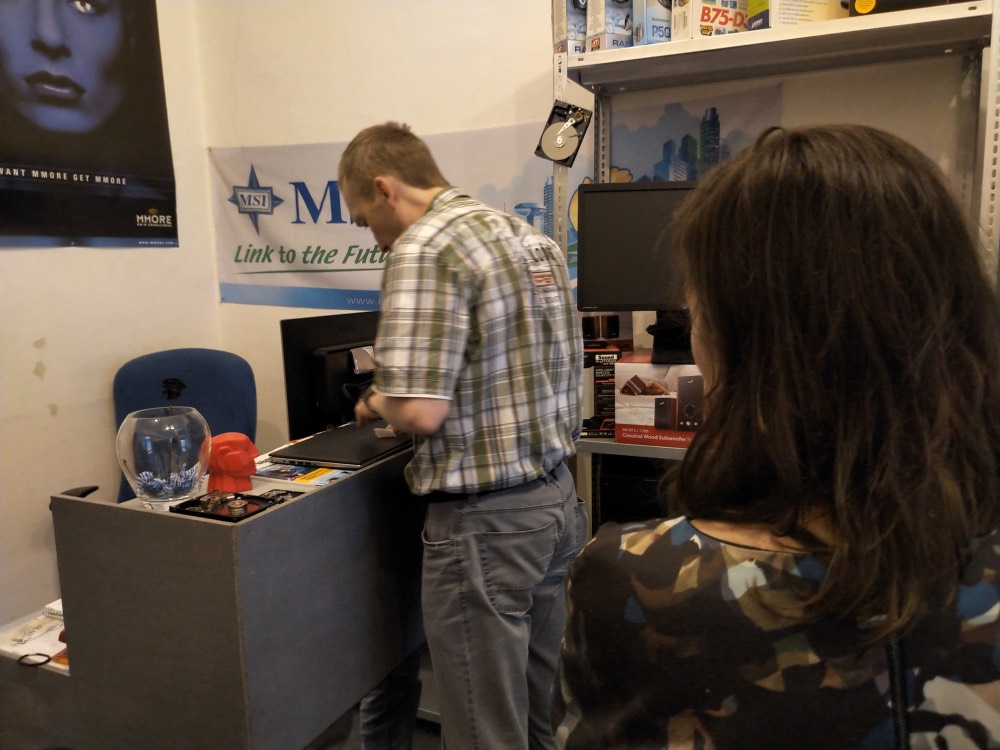 PRAGUE, Czech Republic- I was hanging out with the sound guy after doing the BBC interview a couple of days ago when I received an emergency text from my wife: “Call me. Hard drive dead.”

I tried to calm her down. “Don’t you have everything backed up?”

“How can you not have it backed up? Don’t you use Dropbox?”

“Every once in a while I upload things manually.”

“So you don’t use the sync folder?”

How unfortunate, I thought as I hung up the phone and started hurrying home. She was almost finished, almost done with her year-long course whereupon she could return to the USA and shop for a new computer at leisure. But then something clicked.

On the morning before her first exam I plucked a rose from the bushes out in front of our apartment, put it in a cup of water, and presented it to her along with a breakfast of blueberries and candy bars to help get her ready for the big event. The following day this flower was still sitting on the table. I readjusted my laptop, bumped it, and it spilled all over, getting the bottom of my wife’s laptop wet. Sort of ironic.

But I didn’t think much of it at the time. I dried it off and forgot about it. It wasn’t like the water spilled on the keyboard or something like that. But when my wife informed me that the thing wouldn’t start anymore because it didn’t detect a hard drive, I began wondering … could it be?

It would not have been the coincidence that it may otherwise seem if it wasn’t for the fact that her computer has been on its last legs for the past two years. She refuses to replace it. I once gave her a MacBook Air that I wasn’t using anymore, but she couldn’t be bothered to learn how to us it so it just sat around until I re-gifted it to her mother (who appreciated it) instead. I would give her my lecture on laptops over and over again:

They are not things that last forever, they need to be replaced, at minimum, every two years. I used to replace my laptops yearly — but then I switched to MacBooks and their longevity has increased many fold.

However, even though her laptop was old and we all knew it was going to bite the dust soon, the impact of the situation had an extreme effect on my poor wife. We were walking down the street with it and she was still freaking. She thought it was some trick of the fates for it to die just two weeks before the end of her course.

She didn’t yet know about the vase, and under those circumstances I sure wasn’t going to tell her — when that may not have even been the cause. Instead, I used the opportunity to launch into some kind of I-told-you-so diatribe:

“You know, laptops are not really places for storing data. You should have everything backed up in multiple locations at all time. I always have all of my data backed up in at least three places… I could throw my laptop out a window at any time and be fine.”

But I had a point:

Read about my data storage strategy.

I those dawning days of our computer reliance we didn’t have many adequate options for data storage. So we used our comptuers as stockpiles. Our hard drives would crash, our machines would crap the bed, and we would lose years of work and memories. “My computer crashed” was a viable excuse then for losing data.

This isn’t the case anymore. If you lose data it’s because of one of three things: 1) You’re a moron who for some reason trusts that their machines won’t fail, or 2) You’re lazy and just didn’t bother to set up a proper data storage strategy, or 3) You’re cheap and don’t want to pay for online storage and external hard drives, which generally costs  $200-$300 per year (I drop around a grand per year for this).

The computer is a data access interface, it is not a data storage device. Back up your data off-site daily in, at minimum, two different places. Use an online storage sync program like Dropbox or Mega, and on top of that keep complete backups on external hard drives. Computers are not forever, but your data should be.

***
My wife took her computer to a repair guy. He opened it up and found the inside wet … yeah… my spill. I told my wife. She was not pleased with me but her displeasure was over-ridden by the fact that her laptop regained proper worker order. This story had a happy ending.

Previous post: A Ski Guide to Méribel-Mottaret in the French Alps