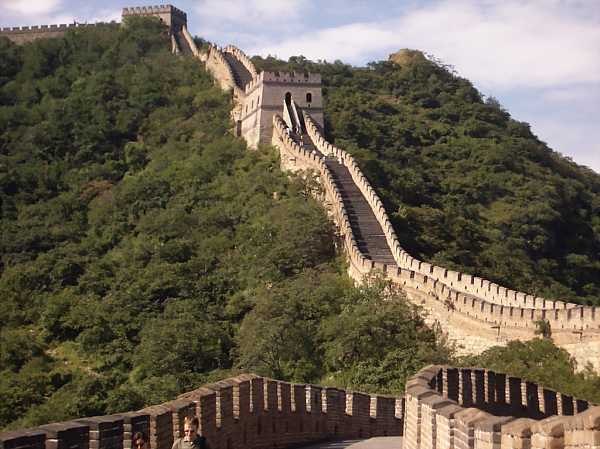 Visiting Old Mutianyu Great Wall of China Without a Tour

A trip to the great wall without a tour. Just take the local bus and walk in, cheap and easy.

Published on November 9, 2012 by Alex Romanov

“If you’ve never been to the Great Wall, you’re not a real man,” – said Chairman Mao. So I packed my stuff and flew to Beijing.

If you want to go to the Great Wall of China, you must get up very early. I got up at half past five, and I suppose not everyone back in my hometown went to sleep, yet.

There are three popular areas to visit the Great Wall of China from Beijing, and these three areas most suited for climbing the Great Wall and walking on it. These areas are: ​​Badaling, Mutianyu and Simatai.

On the Chinese friend’s advice, I chose the middle of the three evils and went to Mutianyu, which is 70 kilometers from Beijing.

First, I got to the Dongzhimen bus station. Buses do not go to the Wall straight from the bus terminal, but stop a little ways away. I took bus 867 with a group of Chinese seniors, who told me that it was the right one.

The bus I took made all the local stops while going through the city. In general, we left at 7 o’clock and of course, my brain whispered: “What are you doing to me?” – and shut down to sleep for the entire trip, a 3 hour journey.

Admission fee to the Wall cost 45 RMB today and 60 RMB if you take funicular.

Many groups come and jump on the funicular, run along the Wall, load back to their buses and leave. But I went by foot because I was not in a hurry and otherwise: what’s the point of conquering the wall?

It’s not very hard to climb the steps, but it takes time which consists of looking around at the lovely scenery and breathing in deeply fresh pinewood air. Autumn nature pleases the eye with a variety of colors. When I climbed up, I found myself smiling, watching the breath-taking views on one of the world’s most famous wonder!

The wall here is not as restored as the Badaling section and many tourists cheerfully climb to the old part, which attracts a lot more attention though it’s collapsed in some places.

A paradise for those, who like to explore the ruins, you can really distinguish restored part with new bricks and the old part, where you don’t know if it’s the ancient ones built during Northern Qi Dynasty (550 – 557) or more likely Ming Dynasty (1368 – 1644) when it was rebuilt.

There are signs telling that it’s is prohibited to go on the old stones, but I saw little Vietnamese children and some families with little kids treading over these areas anyway.

Since the wall is no longer used for military purposes, nature has conquered parts of it, with the young trees destabilizing its hull.

I don’t know how long ago the combat units of the Chinese People’s Army left this part of the wall, but you still can find something like a dry ration discarded there. For many centuries, this wall guarded the capital and imperial tombs; it’s covered with parapets on the inner and outer side to protect defenders from both sides.

At more than two-kilometer area, there are 22 watchtowers; you won’t have time to cover it all in one day, access to some areas is more complicated by the overgrown forest. But the views of the surrounding mountains you get from the towers are outstanding.

If you want a bottle of water vendors ask 10 RMB, but you can bargain them down to 3 RMB on the top of the wall, maybe cheaper at the bottom.

I went to one side and got so tired, and then I saw that the other side, I didn’t walk yet is a huge, long steep snake (height of the walls reaches 7-8.5 meters, goes on the mountain terrain), running up and down.

Then I ran to that part too, where they bring another bunches of tourists on the cable cars. The descent was much more cheerful. I went back on the same bus at 16:00, as I got from the schedule it’s the last one, and I slept in the bus again the whole way back.

This trip will suit those who like to get up early and to see as much as possible without any tour agencies for very cheap. One more little bonus, you can send your ticket – it’s made as a postcard. You can put a stamp on it and here you go. From time to time, I look at this postcard which I sent myself back home to myself, remembering how I became a real man!

Previous post: MyCharge trumps Mophie in the battle of the batteries