VENTANILLA, Mexico- Ventanilla is called as such because there is a little opening that looks like a window within a rock outcrop that stretches out to sea from its beach. But this little window is not why people come here: they come here for the crocodiles, they come here because it is a truly undeveloped [...]

VENTANILLA, Mexico- Ventanilla is called as such because there is a little opening that looks like a window within a rock outcrop that stretches out to sea from its beach. But this little window is not why people come here: they come here for the crocodiles, they come here because it is a truly undeveloped beach that stretches all the way to Puerto Escondido, interrupted only by the seasonal overflow of mangrove lagoons into the sea.

How to get to Ventanilla

After enduring the party central of Zipolite and the openly flaunted social deviance of Mazunte, Ventanilla was exactly what I wanted. I arrived to the cross roads that lead to the little village after taking a 10 peso truck from Zipolite. I hopped off on the side of the highway and immediately began walking down a virtually deserted road in the direction of the beach. I suppose I could have taken a taxi, but when the distance that I want to travel is under five kilometers I do no such thing: I walk. I would estimate that the distance between the highway and Ventanilla is a little under two kilometers — not far. 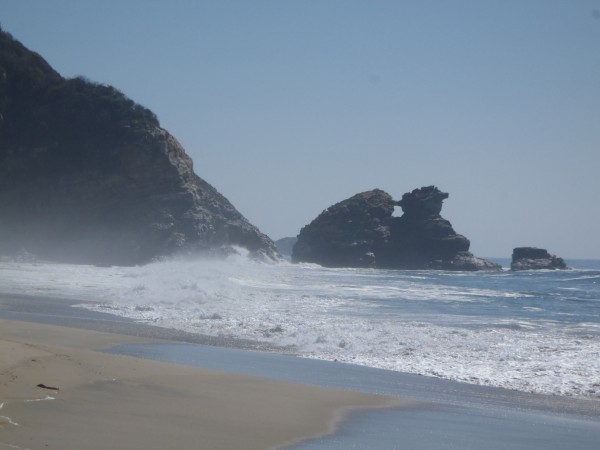 The window of Ventanilla

Upon arriving in the little village I was immediately approached by crocodile tour people. This tour goes out into the mangrove strewn lagoon to look at the crocodiles and other animals. This is the main reason why people come to Ventanilla. I told the crocodile guy that I would be back, he nodded his head and walked away knowing that I was telling the truth — for there is little else to do in Ventanilla than go and see the crocodiles. He knew that I would return.

But first I wanted to go out on the beach — the long, beautiful, empty beach. In the dry season a person can start walking west on this beach and end up in Puerto Escondido before they hit any impediment. As I stared out over the flat, empty sands there was not a hippie, a nudist, a homosexual, a new age spiritualist, a backpacker, no representative from any societal fringe elements that dominate the other nearby beaches in sight: there was nobody. I felt good. A short walk away and I would truly be in a place where there was only sand, sea, and nothing. I watched the waves come in, I dug my toes into the empty sands, and then I turned back to be reminded of why I had come to Ventanilla: a train of tourists in orage life vests tailing a few guides carrying oars stomped through my paradise.

I admit, we had come to Ventanilla for the crocodiles too. 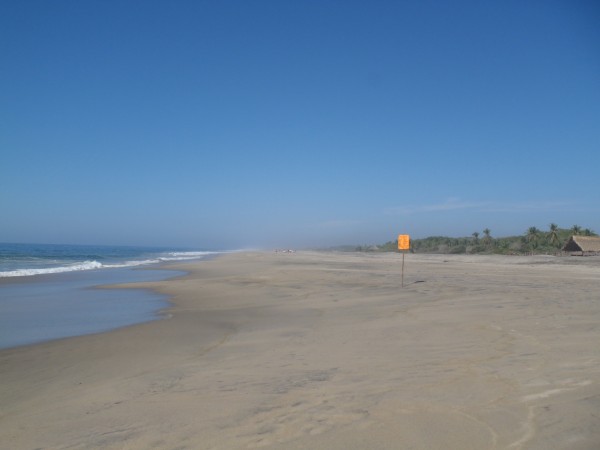 For a little over $3, you can hop on a boat and be taken into the mangroves to check out the things that live there: iguanas, turtles, birds, and crocodiles. For three bucks a person, I could not cringe at the prospect of being herded around on a tour. Sometimes, every once in a while, tours are not awful — they are a benign way to access an interesting area of the world that I would not be able to get to easily on my own. I don’t carry a boat around with me, I would not go through the hassle of preparing my own expedition to these small lagoons, and if wanted to be real cool and hire some local guy to take me out privately, I would be looking at paying over three dollars. In point, every once in a while I will hop into the tour boat and take the ride.

The making of tourism at Ventanilla

After Mexico banned sea turtle and crocodile harvesting in the 90’s, and subsequently put much of the coast out of work, the people of Ventanilla, along with coordination from various environmental groups, began developing alternative industries: they went for tourism. The village worked to restore their mangroves and lagoons, and began running boat tours to see the crocodiles that live there. They formed an environmental collective and discovered the greater economic incentive behind ecological preservation rather than ecological pillage. 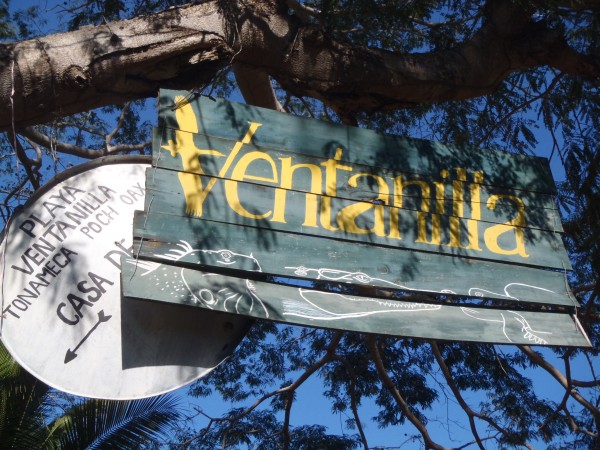 I, too, soon found myself stuffed into an orange life vest and plunged into the bow of a small row boat. There was another Mexican family sitting behind us and a guide named Augustino.

The 40 something year old guide had told me that he was from Ventanilla. I sought clarification and asked him if he was born there. Again, he said that he was — meaning that for much of his life he lived on a three family coconut plantation sans electricity and completely off the grid in the general sense. It was not until the mid 90’s, following the wake of a couple large hurricanes, that more people came into Ventanilla. I asked Augustino how many people now live there. 25 families. I did not ask him if he use to hunt the animals he now strives to protect.

I would find no irony in an affirmative response.

The guys running the tours at Ventanilla seemed to really love their lagoons, they seemed to genuinely enjoy the crocodiles with skin still on them, and they seemed to be having a real good time searching for iguanas in the trees to point out to tourists. They seemed happy and low key, and this seemed to make the tourists fell happy and tranquil. The family that we were in the boat with were not the particularly annoy class of tourists that yell and shrill when on tours, compulsively point to things, and thrust themselves into optimal photo taking position, but they were calm and cool — sharing their coconut and conversation with my family. 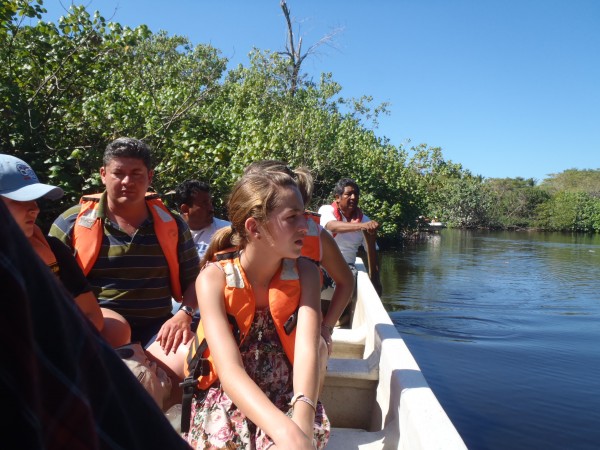 Tourists on boat in Ventanilla

Rather than filling their swamp with trash and skinning most everything that moves, the people of Ventanilla now take visitors into the lagoon to photograph the animals that live there. Rather than collecting sea turtle eggs to eat, they collect them to hatch and then release the babies into the sea. People will do what there is money in. If there is cash to be found in gutting sea turtles, then sea turtles will be gutted; if it is more economically viable to make boots from crocodiles, then boots will be made; if a livelihood can be created from taking fools like me out to see some turtles humping in a swamp then tickets will be sold. Money is the prime resource that humans now use to get what they need to survive — everything else is secondary. 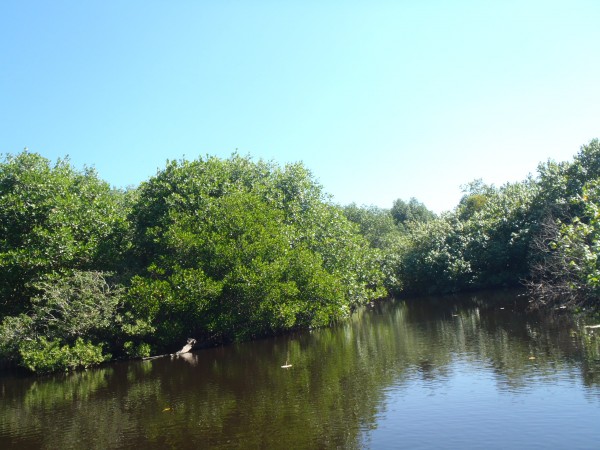 Lagoon and mangroves at Ventanilla

Ventanilla had to be made into a money maker to be preserved, and it has been with great results. Much of the money raised from the crocodile tours is invested into the preservation of the lagoons, the mangroves, and the animals that use and live in this area. Thousands of sea turtles still lay their eggs on this beach, only now the community makes sure they hatch and have a better chance at life. They use to eat them.

The natural world is a commodity, people have always plucked from it to meet their own ends — this is normal. Ecotourism is the attempt to re-direct the value of nature as something to remove and pillage elements from to something to leave alone and reinvigorate. If the lagoon at Ventanilla is full of crocodiles — it is, there are over 200 of them — the tourists will come and lend value to the place. Ecotourism is the attempt to make sea turtles more valuable inside their shells, crocodiles worth more money inside their skins. Rather than taking tourists out to Serengeti with rifles, they now provision them with cameras. The animal gets to live when it is all over, but it is still the same game. 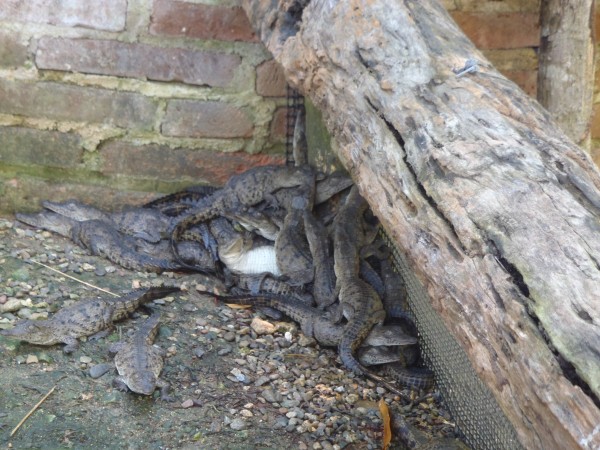 Nature is, and always will be, a commodity. Whether we are talking about Native Americans trading buffalo hides for chert, Mexicans skinning crocodiles for boot leather, or the people of Ventanilla running boat tours, the natural world is measure by the value of what humans can take from it. Business as usual. 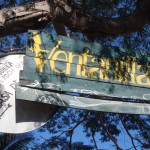 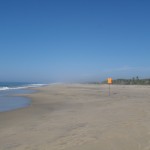 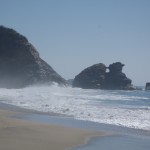 The window of Ventanilla 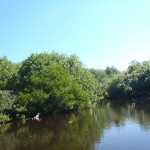 Lagoon and mangroves at Ventanilla 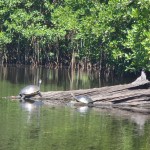 Turtles in Ventanilla lagoon (not copulating) 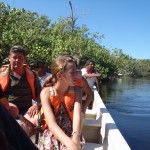 Tourists on boat in Ventanilla 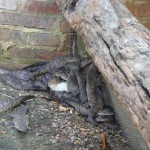