Travel to Eastern EuropeI am now pondering my path of travel for the summer of 2008. It looks as if this summer is for Eastern Europe. I fly through Dublin and into Prague in the Czech Republic on Wednesday June 4, 2008, and then I should take off by foot and thumb from there and [...]

I am now pondering my path of travel for the summer of 2008. It looks as if this summer is for Eastern Europe. I fly through Dublin and into Prague in the Czech Republic on Wednesday June 4, 2008, and then I should take off by foot and thumb from there and travel deep into the smörgåsbord of countries that is the current arrangement of Eastern Europe.

“God looks with grace upon acts that begin on Wednesday.” I do not know where I picked this quote up from, I do not know if it is true, but I always begin journeys on Wednesdays. And it just works out that Wednesday is usually the cheapest day of the week for flights. I paid $421 to get from Rochester, New York to Dublin, Ireland via JFK on the Jetblue/ Ryanair partnership and then another $65 to go from Dublin to Prague in the Czech Republic.

I split this journey to Prague up into two separate flights to avoid any complications with not having an onward ticket when I board my flight to Dublin from JFK. Sometimes on flights out of the USA, you will meet an overzealous check-in drone who will demand that you have proof of onward travel before they will allow you on the plane. It is my impression that this is just a colossal scam to sucker you into buying another ticket with their airline. To avert this I bought one ticket to Dublin and then a completely separate one to Prague. So if I am asked in JFK if I have proof of onward travel I can say “Yes, I am going on to Prague, would you like to see my itinerary?” Well, I am going on to Prague a few hours after I land in Ireland but I think I will keep this fact to myself. It will be a quick visit to Ireland, I suppose. Hey, I am a fast man.

Map of my air flight from Rochester, New York to Dublin, Ireland to Prague in the Czech Republic. Click on the map to make it bigger. 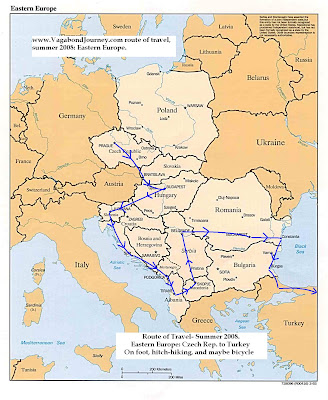 Travel plan for Eastern Europe: fly into Prague then walk, hitch-hike, and maybe ride a bike through Hungary, Slovenia, Croatia, Bosnia and Herzegovina, Montenegro, Albania, Serbia, Romania, Bulgaria, and then on to Turkey. Click on the above map to make it bigger.

From Prague I have no real idea of where I am going. Initially, I thought that I will take the fast road straight away to Turkey and the Middle East, but now I am thinking that I may want to travel around Eastern Europe and the Balkans for a while. I am thinking of deep blue skies, clouds, lush green fields, and good walking. The taste for Eastern Europe is sinking into my mouth. I may stay for a while and travel the wavy path that is in the map above.

Map of the Czech Republic

I have always dreamed of traveling in Eastern Europe, and I think that it would be frivolous to just run through it on the quick Road to elsewhere. I can remember being an 18 year old punk kid working a short stint at a Blimpies sub shop in Connecticut and thinking about the day that I would be tramping in Eastern Europe. I made crappy sandwiches and could never remember if I was to put the cheese on before the meat or the meat before the cheese, but I did dream my way through the Eastern European hills. Menial jobs make for a free mind, and during my few weeks of making subs in Connecticut I was mentally hitch-hiking across the Balkans.

Now, nearly a decade later, I shall do it.