Tlayudas  are a Good Mexican Street Food OAXACA, Mexico- Think of an entire Mexican meal — meat, beans, salad, cheese, and salsa — laid out upon a plate. Now think of this meal without the plate and wrapped in an extra large tortilla. This is a tlayuda (pronounced tsay’uda). It has been my experience with Mexican [...]

OAXACA, Mexico- Think of an entire Mexican meal — meat, beans, salad, cheese, and salsa — laid out upon a plate. Now think of this meal without the plate and wrapped in an extra large tortilla. This is a tlayuda (pronounced tsay’uda). It has been my experience with Mexican cuisine that much of it is remarkably similar to itself: dobladas are really just medium sized tacos and tlayudas are just large sized dobladas. I asked a woman cooking at a doblada restaurant what the difference is between what she was making and a tlayuda, and she said, “Tlayudas are bigger.” 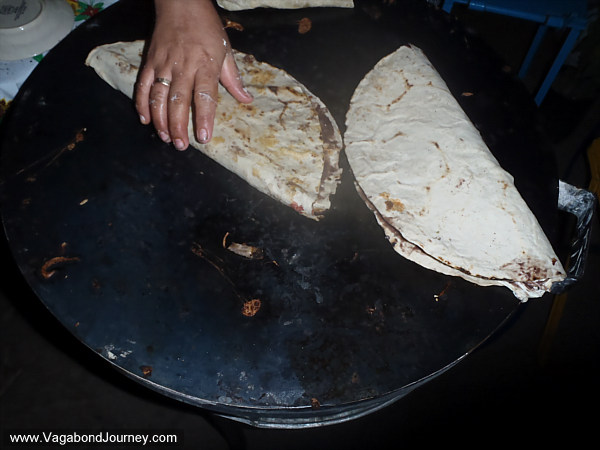 Very true, tlayudas are bigger and they include more salad as a rule. Tlayudas are also cooked in their tortillas, giving the outsides a crispy texture and a roasted taste. I must say that although tlayudas are pretty much just big dobladas, they are one of my most sought after meals in Mexico. It is too bad that they are pretty much only made in Oaxaca — the rest of the country, apparently, has not caught on to these super large tortillas of absolute goodness. Truly, an entire meal wrapped up in a single pizza sized tortilla is culinary efficiency at its best, for who needs a plate, silverware, and multiple courses when you can just stuff it all into one big tortilla that you eat with your hands?

Tlyaudas can be made with beef, chicken, pork, or just about any other meat you can imagine. A layer of refried beans coat the inside of the tortilla, and a sort of mozzarella string cheese called quesillo is generally added to the mix as a rule. Over top all of this is laid a salad consisting of avocado, tomato, and shreaded cabbage. Once these ingredients are laid upon the tortilla it is folded in half and tossed upon a roasting stove. 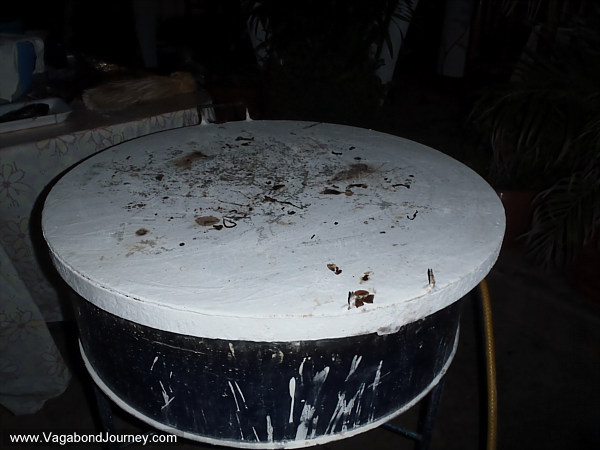 The apparatuses that tlayudas are cooked on are either a steal drum looking stoves that have a round steel plate over top of a live, gas fed flame or are just small BBQ grills.

The steal drum stoves are interesting cooking devices that I have not observed anywhere outside of Oaxaca. They look like the bottoms of 50 gallon drums that are flipped up on end and then stuffed with a sting of gas burners. The tops of these steal stoves are covered with some sort of white spreadable lime stone based substance called, talc. It looks sort of like white paint, but I was assured by the people cooking on them that it was a common substance used to line stove tops in this part of Oaxaca. It is my impression that this lining is used to keep the tlayudas from sticking to the cooking surface. 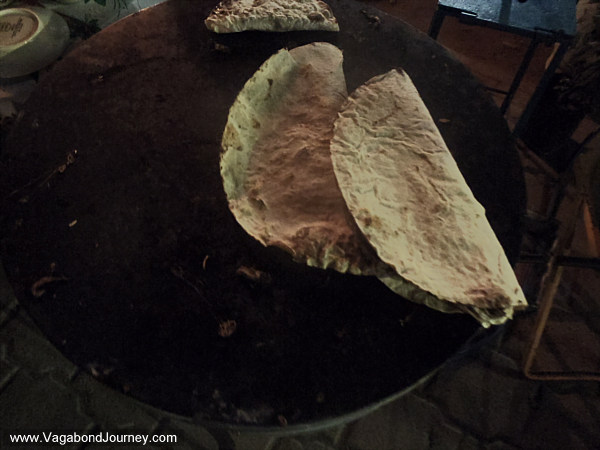 The other way that tlayudas are cooked are over a live flame coming from a small grill. These grills are simply devices made from sheet metal, and are common throughout the south of Mexico. The tlayudas are put inside specially made wire clamps and put over the flaming coals.

Typically, tlayudas are street food that are sold from numerous vendors that set up shop on the busy pedestrian thoroughfares of Oaxaca during the dinner hours. They usually cost around 35 pesos, and are, as stated above, a full meal in and of themselves.

Wade Shepard is the founder and editor of Vagabond Journey. He has been traveling the world since 1999, through 90 countries. He is the author of the book, Ghost Cities of China, and contributes to The Guardian, Forbes, Bloomberg, The Diplomat, the South China Morning Post, and other publications. Wade Shepard has written 3532 posts on Vagabond Journey. Contact the author.

Previous post: A Bit of Culture Shock and Some Unexpected Surprises