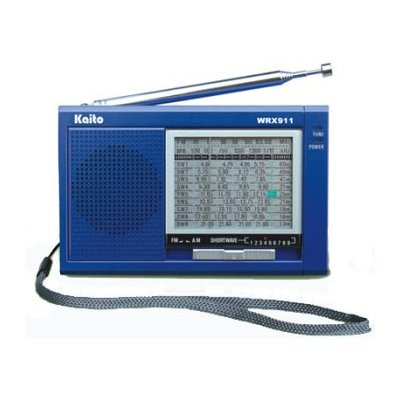 Why You Should Have a Shortwave Radio When Traveling Abroad

In the days of the internet, why use a shortwave radio?

If you are always connected to the internet and stay in nice hotels with cable TV when traveling then you probably have no need for this article about shortwave radio. In this case, a shortwave radio is just extra baggage that you’ll probably never use. If, on the other hand, you like traveling on the cheap or to remote areas, a shortwave radio can help you keep your sanity and find out what’s going on in the outside world.

I first got into shortwave radio back in the mid 1980’s when I was still in middle school. Looking back, those were were the golden years of this form of media. With the Cold War in full swing and the internet unknown, there really was only one reliable way to get international news, and that was shortwave. I remember listening to Radio Moscow, Radio Havana, Radio Australia, the BBC, Deutsche Welle, and Radio Netherlands and many more nearly every night in English. During the day, I’d listen to AFRTS (Armed Forces Radio and Television Service) and their feeds from all the major radio networks.

When I first started to travel internationally in the mid 90’s, I took along my Sangean shortwave radio and listen to news and information no matter where I was. Not only for shortwave, I even used it to listen to US AM radio stations while in Honduras and Mexico. I knew what was up in the world without needing to find CNN in some expensive hotel.

Over the years, changes have come over shortwave. It’s not nearly the awesome news and information source that it once was with the growth of the internet. Stations have significantly cut back on their English broadcasts and put programs on the internet instead.

Ok, so why spend money on a shortwave radio these days? Just because most stations have cut back their English broadcasts doesn’t mean you can’t find English programs easily. On a typical evening, I listen to Voice of Russia, BBC, Radio China International, Radio Australia and others in English. Many listeners just don’t use shortwave to listen to the broadcasters, they listen for the myriad of other signals that can be found out there, including ham radio operators and supposed spy stations.

When I tune into a shortwave station, I invariably pick up my Kindle and read a book while listening to it in the background. If I got my news off the net, I’d be reading the articles and then wasting time on Facebook trying to build some fake farm.

When I first started traveling abroad in the 90’s, an old newspaper foreign correspondent gave me some advice of the three things he always took with him when traveling in the coup prone third world. These were $400 in cash in various small denominations, the book “Where There Are No Doctors,” and a shortwave radio. I think these three suggestions still make sense today.

I was in Thailand during the 2006 coup. It was bloodless and peaceful, but I couldn’t get any information on it none the less. The internet was shut down as were the international news stations. The TV stations did nothing but show pictures of the King while playing his jazz music. Shortwave radio gave me the information I wanted to know at a time when I couldn’t get it anywhere else. In areas of turmoil around the world, the internet is one of the first things that get shut down.

Another good use for a shortwave is for cheap entertainment. If you are out vagabonding and sleeping on the cheap with minimal gear, a shortwave radio will keep you entertained. I think a shortwave radio would be indispensable on a bike trip or on a long distance trek when you spend a lot of nights outdoors under the stars.

Shortwave radios are cheap these days and fairly easy to buy. Kaito and Tecsun are two of the better cheap brands out there. You can get a small Kaito WRX911 for around $20 that will fit in a shirt pocket, allow you to listen to the big international broadcasters, and give you battery life measured in weeks — but will probably leave you unsatisfied in the long term. My favorite shortwave radio is the Tecsun PL660. It’s the one I use most of the time, as it can tune into stations that are just static on many other radios and compares favorably to radios 3 times its price.

When it comes to finding stations, you’ve got two choices: either just scan the bands looking for something interesting or you can get an issue of Monitoring Times for $3 online and get an hour by hour schedule of who is broadcasting where. In general, you can just look at the band from 5900 to 6300 KHZ and from 9500 to 9900 Khz at night for stations playing a language you can understand or music you like to listen to.

Ok, you may not be sold on a shortwave radio, but let me give you some advice: If you travel abroad, I think you really should carry an AM/FM radio of some sort. Much of the culture you can experience in other countries is found on local radio, from local music to local talk and everything in between. If you are carrying a radio anyways, might as well make it a shortwave.

Get a shortwave radio

About the Author: Jack Woods

Jack Woods is an Engineer turned Science Teacher who has been travelling abroad since the late 1990’s. He is also the man behind Get Pesos and The Musing of a Lost American. Follow @jackq7a. Jack Woods has written 3 posts on Vagabond Journey. Contact the author.

Previous post: End of an Era: The London Olympic Cleanup