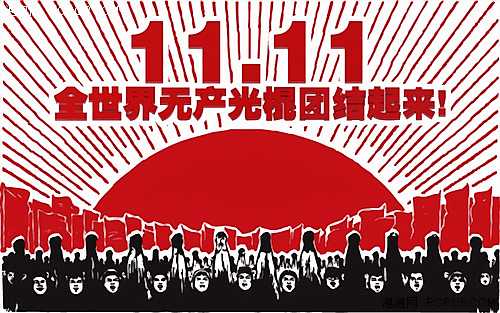 There are now over 180 million single adults in China, and a holiday just for them.

“China is the only country in the world with a singles day,” a single friend told me.

Sometimes referred to as the Chinese Anti-Valentines Day, Bachelors’ Day, One’s Day, or Bare Sticks Holiday (光棍节), Singles Day is a holiday for single people in China to call their own. The holiday was said to have been started in the 1990s by college students to serve as a reaction to the growing number of single adults in the country. So on November 11th, a date chosen because of it’s numeric rendition is 11/11 — four single ones — unattached Chinese people join together and celebrate, joke about, bemoan, or try to end their single status.

Rest assured, there are no shortage of people in this country to celebrate this holiday. According to a recent survey, there are over 180 million single adults currently in China. This is a country with a massive gender imbalance, with 120 boys being born for ever 100 girls, and strict marriage traditions which demands that men make more money and hold a higher social position than their wives. In this climate, many marriage age adults are falling through the cracks, as poor men are having an increasingly difficult time finding women who will marry them, and many successful, rich, and career oriented women are finding their potential mating pool likewise diminished. In point, Singles Day in China is not just a fluffy pop culture event, but a sign of a national crisis where tradition is colliding head on with modern reality.

Like most Chinese holidays, Singles Day is full of symbolism. On the morning of this holiday single people are suppose to eat four deep-fried dough sticks and one steamed bun for breakfast — which represent the four ones and the dot in the date 11.11. But the most important part of this holiday is suppose to be the singles’ dinner, where single people gather together and and socialize, with everyone paying their own bill individually to showcase their independence.

Other Singles Day traditions involve sending messages to single friends and family members, going on blind dates (sometimes arranged by dating websites or other institutions), or exchanging gifts with a crush. Though the ultimate goal of this holiday is to take action so that you don’t have to celebrate it again the following year, and the events that surround this day are more or less aimed towards encouraging singles to go out and find mates.

But the main intrigue of this day is now, of course, the shopping.

Many Chinese retailers have jumped on the Single Day’s tradition of gift giving, and in the days leading up to November 11th people without romantic partners in China are provided with something to assuage their woes over their solitary status: sales. Retailers across the country and, especially, online slash their prices to ridiculously low amounts in their pursuit to dump their stock on the loveless — or anyone else for that matter.

Though Singles Day was designed as an unofficially holiday to encourage single people to be social and try to find a partner, everybody is now free to participate in the main events: shopping, shopping, and more shopping. China’s Singles Day has evolved from a  quirky little celebration for college students into the biggest day for online shopping on the planet.

Beginning a few days leading up to the holiday, the online market places of China begin buzzing with sales. Many of their already cheap prices are slashed up to 70% off, and exited shoppers buy not only gifts for others, but things for themselves. The merchants on Taobao, China’s equivalent of Ebay, and Tmall.com reportedly brought in over $3 billion in the 24 hour period of this year’s Singles Day.

“The stuff is so cheap it doesn’t really matter if it’s good or not. If you order a pair of shoes and they turn out to be crap you can just buy another pair the next day,” my friend explained the fearlessness of Taobao shoppers.

All practical effects considered, another name for Singles Day could very well be “Online Shopping Day.”

Next post: China’s New Leaders Rise to Power as Beijing is Locked Down

Previous post: Why You Should Have a Shortwave Radio When Traveling Abroad