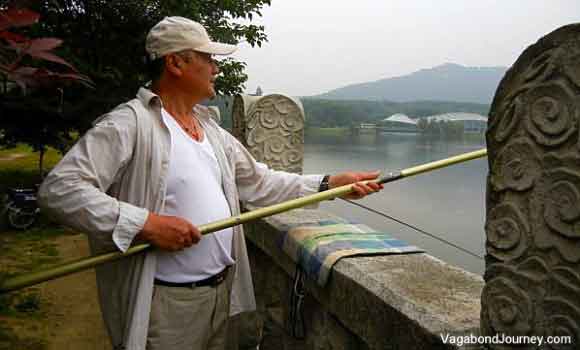 I was walking on the banks of Qian Lake at the base of Purple Mountain in Nanjing. On this warm spring day there were dozens of fishermen with their lines dangling in the water. Men were leaning over a decorated concrete railing and fishing side by side in a long row all away around the periphery [...]

I was walking on the banks of Qian Lake at the base of Purple Mountain in Nanjing. On this warm spring day there were dozens of fishermen with their lines dangling in the water. Men were leaning over a decorated concrete railing and fishing side by side in a long row all away around the periphery of the lake. Their lines hung idly as they stared off into the distance. None of the fishermen were really talking, their faces were as still and tranquil as the surface of the lake, the sky, and the green mountain beyond.

The more complex rods were a retractable type made up of cylindrical sections of fiberglass or aluminum that taper down thinner and thinner from the handle to a little ringlet at the tip top. When contracted, the smaller sections of rod fit into the larger ones and the entire thing slides down into the handle like a telescope; when extended, it looks like a long tapering pole. At the top of the rod a line is tied — there are no reels, and apart from it being retractable, it’s basically just a stick.

The simpler fishing rods really were just sticks that had a line tied at one end.

The bait consists of mashed balls of sea stuff, crab meat, store bought bait paste, or miscellaneous bits of leftover dinner. Each fisherman kept a small bucket full of water at their side which I mistakenly took to be for live bait at first.

I found myself walking by the fishermen with a middle aged guy who seemed to have taken an interest in me. “What type of fish are they fishing for?” I asked.

He responded simply that the men with the poles were fishing. I’m unsure if he was sure of what I was asking.

“Are they fishing for big fish?” I asked, simplifying the question.

At that the guy burst out laughing, and walked briskly towards one of the fishermen, waving for me to follow. He lifted up the lid from fisherman’s bucket and showed me the how big the fish were that they were after. I peered down and saw a handful of small, three to four inch long silver and brown fish flopping about in some murky water. Where I come from we call these fish minnows, and we only use them for bait. I’d previously assumed these little fish were being used for the same purpose here in China, but I was wrong: these were the fish that these guys were trying to catch as they fished the shallows of the lake. They were fishing for minnows.

I’d made this same error some years earlier when watching fishermen in Istanbul.

This is what they were fishing for

“Do you eat such small fish?” I asked the fisherman.

He shrugged and said that he did, but it was clear that he was not out fishing to tame his hunger. It would take a very large catch to do this.

“Those people fishing, they only do it for fun,” a friend in Taizhou later told me.

Though on occasion I have observed fishermen pulling out larger fish like carp from rod fishing, they are mostly just catching minnow — and they are doing it for recreation in the urban areas of Jiangsu province. It is my impression that the subsistence or professional fishermen, the ones that are in it for their dinner, leave their rods at home and use nets.

Next post: Mobile Version of Travel Blog and Guides