How I stay physically fit while traveling the world.

Physical fitness is based on routine. Travel is typically considered to be the antithesis of routine. There is a contradiction in intents if the long term traveler also wishes to gain and maintain a peak level of physical fitness.

It is the routine that prepares you for what you are capable of facing physically: a beach comber will probably not do well if pressed into climbing a mountains, while the through hiker will not be able to keep up their performance if they all of a sudden decide to spend three months sitting on a beach. Physical ability is not something that can be flipped on like a light when needed, it is something that must be continuously cultivated to maintain.

This contradiction rears its head as the long term traveler tries to stay in optimal physical condition on the road. In point, some points in travel find you trekking through forests, stomping up mountains, swimming in oceans, walking 10 miles per day while other stretches find you sitting idle on a beach drinking beer all day long. This great contrast of physical stimulation is something that will flip flop back and forth throughout a traveler’s journey, and the conditioning that is earned in the active times of travel are quickly lost in the idle times: eventually it will become difficult to leave the beach and go into the mountains.

Unless, of course, intentional action is taken. 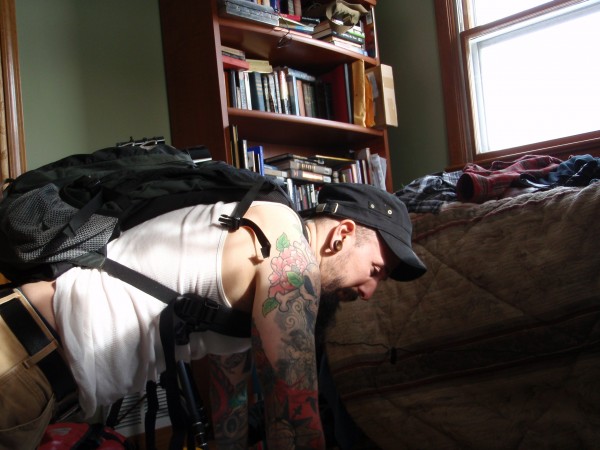 This may look ridiculous doing push ups in a dorm room, but a fitness routine demands such foolishness.

This new series is about physical fitness and travel. As with most series on VJT it is meant more for long term travelers who have been on the road for many years more than for the person on vacation or in the midst of a few month excursion. This is a series about obtaining and maintaining a high level of physical fitness while living a lifestyle that is deprived of any sense of geographic regularity. This series takes as its mission the development of a physical fitness routine that can be blended into the often routine deficient lifestyle of world travel.

This series does not take as its premise that travelers are inherently out of shape creatures or that the lifestyle has the tendency to lead towards sloth like behavior. To the contrary, it is my opinion that the activity level which world travel demands leads to travelers being in vastly better physical condition on average than their sedentary brethren back at home. But this series does take into account that the perpetual motion of travel does lead to difficulties if a person wants to maintain a high level of physical fitness through which they could harness the ability to access parts of the world under their own power.

Background of the physical fitness and travel series

I will soon be 30 years old, and the idea that my body will start to wan has just raised its head in my consciousness. I have just never thought about the physical effects of aging before, my life up to now consisted of climbing the mountain of maturity, and now that I have summited there is only one place to go: down. I am sure that I will probably still have another 10 years more or less positioned upon this summit, but the downward route on the other side is inevitable.

***
I went for a run a few weeks ago in the Finger Lakes region of New York State. I did not last long. I listened to myself huff, puff, creak, and grind like never before. I felt ashamed of myself. It had probably been a year since the last time I ran. I have no memories of running more than just a brief sprint throughout my most recent travels in the Caribbean, Central America, and Mexico. When I tried running long distance through the farm country of my sister’s home I felt like the chain on a rusty old bicycle being peddled for the first time in a decade: my knees and ankles creaked, snapped over, I felt if at any time I could break. I felt stiff, old, scared.

I do not believe that this lack of physical fitness was due to aging, but rather from a lifestyle that did not include running or heavy cardiovascular activity for an extended period of time. I imagine that I would have felt the same if I lived the same lifestyle a decade ago. A symptom of family travel is that I am rarely in a position to exert myself over mountains, down rivers, and through forests as had once been a given in my earlier travels. A symptom of making a living off a website means many hours of sitting idle, ticking out words into a screen. These duel functions had reduced my cardio endurance down lower than I ever remember it being.

As far as strength goes, I am at the top of my class — I exercise my upper body daily — but internally, at the cardio level, I had atrophied greatly over the past two years. My biceps, triceps, pecs, and back are in peak shape, but my most important muscles — my heart and lungs — were left floating idle. I often walk a minimum of five miles per day when traveling — this is the way I prefer to visit places, meet people, exercise — but I had no idea how ill-suited I had become when turning up the velocity and running. I always figured that walking and running were birds of a feather — that one inherently lent preparation to the other — but I was wrong: walking does not often increase the heart rate of a physically mobile person, and this lack of cardiovascular trial left me on the side of the road panting.

I heaved myself through that first run and set upon myself the mission of using my body more in my travels — even if this means going on trips without the wife and kid. In point, I am an athletic person, I have always been able to push myself faster, farther, longer that most of my companions. When I first began traveling, I went into the mountains. I climbed, hiked, pushed myself and gained experience and memories. Later on I hoped on a bicycle and rode across countries. I am still physically able to travel like this, but I won’t be indefinitely.

If I don’t take advantage of my ability to function at a high level physically now, I will miss the opportunity completely. I am having what could be called my first mid-life crisis, I am acknowledging the fact that I am growing older and that my body WILL wan. I am no longer climbing the ladder of manhood, I am at the top giving a brief look around before I inevitably climb back down.

“There is nothing good about getting old,” my friend Andy Graham mentioned to me numerous times when talking over bottles of Coca-Cola in various places in the world. He said these words repeatedly to me throughout our friendship, and I tried to ignore them. When I first met Andy I was exactly half his age — I thought he was old and I was young — but now Andy is 55, I am nearly 30, and I now know that although our positions on the track are still pretty far apart, we will both meet the same end game: our bodies will someday not be able to keep up with our intentions as we travel through this planet.

The red flags have shown themselves clearly: I need to make use of my athleticism while I still can. There is an entire lifetime for me to engage in more sedentary affairs such as writing, study . . . working on this website.

It is the joke of the ages that people often force themselves into the longest lengths of study and idleness that they will ever face in their lives at the same time they are most physically capable. I went to university throughout my late teens and twenties — this path was very jagged and I did not graduate until I was 27 — and I stand in shock now as I realize that I peddled the time in my life when I was most able to climb mountains and paddle the seas staring into a computer screen, stuffed in books, sitting still, working out my mind while ignoring what I was physically capable of accomplishing. Silly irony.

Most men will peak physically between the ages of 28 and 35. After this, muscle mass will decrease, vital organs will begin to shrink, metabolism drops, aerobic capacity plummets, deep sleep is lessened, bone density begins to atrophy, and human growth hormone is fired off at an ever more decreasing pace, while cholesterol rises, blood pressure grows higher, and body fat accumulates.  I am standing at the pinnacle of my physical prowess, looking back and the road that brought me here with full knowledge of where I am going.

The red flags have shown themselves clearly: stop sitting in that that old, creaking wooden chair looking into the computer screen and get out into the mountains that rise near you, get on the rivers, paddle a boat out to sea: the end game is always upon you, there are less than 10 prime years left.

Physical fitness is a routine, but it is always a losing battle: three weeks of physical advancement is lost per week without training. If you think you can maintain the fitness earned from a three week trek a month from now you are wrong.

If a high level of physical fitness is desired it is something that a traveler must work at daily as they move through the cities, beaches, mountains, forests, and deserts of the world. Physical fitness must become a routine that is implemented regardless of changing longitude and latitude, and for aches and pain check out CBD balms.

This series will document my fitness regimen as well as evaluate those of other travelers, mobile athletes, and adventure sports enthusiasts to investigate ways that you could also stay physically prepared while also traveling the world.