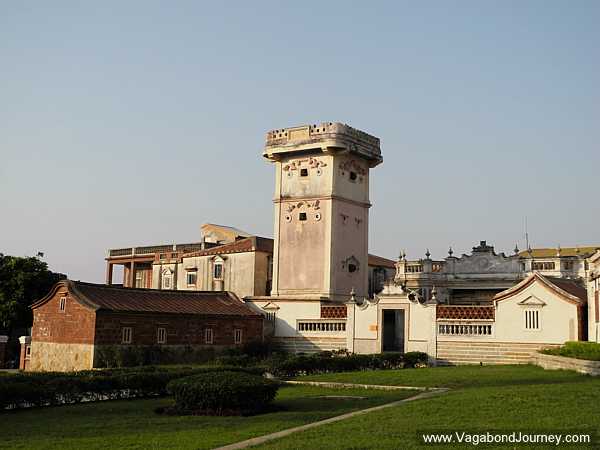 An enclave of old Western buildings rise near the port on Kinmen Island. How did they get there and who built them?

I was told that there were a bunch of old Western style houses in a little village down by the port on Kinmen Island. This sounded strange in a place so traditionally Chinese and hasn’t had a colonial presence since the 1700s when the Dutch were around, so I walked there to have a look.

As I came to find, Shuitou village, where the assemblage of old Western style houses are located,  is known for its contrasting styles of architecture — and is one of the main stopover points for tourist coming from the Chinese main. Here, old Minnan houses with swallowtail roofs are scattered about grandiose, colonial-style Western mansions. As a buffer between these two polar opposites of architecture are a few modern style concrete houses with tiled exteriors. When mixed all together the effect is architecturally kaleidoscopic: one block is like ancient China, the next like this modern era, and the next like a European colony.

I walked beneath the eaves of the elaborate roofs of a row of red brick Minnan houses and soon found myself before a fortress — almost literally. A stone watch tower rose up out of the center of a stone-gated complex with a grandiose faced and ornate decor carved into everything and anything. These were buildings that would not have looked out of place in any European outpost from the Caribbean to Africa to SE Asia.

I would call the style of architecture colonial, but there was nothing colonial about these buildings. No, this collection of fifteen or so old-style Western buildings were built by Chinese people native to Kinmen Island in the 1920s.

Fujian province, which traditionally includes Kinmen Island, was one of the major launching point for overseas Chinese workers. These Western style houses in Shuitou were built by villages who accumulated a substantial amount of wealth working and running businesses in Indonesia. When they returned home they constructed these lavish villas which resemble the colonial architecture of the land where they made their fortune. There is perhaps no better way of showing that you’ve gone out into the world and prospered than bringing home what impressed you there.

Simply put, the various European colonial styles of architecture show one thing: power. Meek people don’t live within such grandiose, difficult to build, resource sucking, masterful structures. Perhaps this architectural style has less to do with Western mimicry than the fact that it perfectly represents what the people who build them are going for perfectly — especially in the landscape of Kinmen Island. In order for something to show status it must stand out from whatever is around it. Here on this island, these old Western style houses are about as inconspicuous as an erection in sweatpants. This is as true today as it probably was when they were built 90 or so years ago.

Copying the architectural styles of other cultures is almost a normal phenomenon in China. All they way from the back to the early days of the civilization there has been examples of architectural appropriation and mimicry. I do not believe that this is a show of self-colonization, which it is sometimes touted as. A common theme in Chinese history is that this culture has the power to absorb other traditions, technology, and styles from other cultures and make them their own. This culture is carnivorous, it eats elements of other cultures to demonstrate its power.

The tower was constructed as a lookout point from which to detect Japanese pirates.

More in-depth articles on China’s replicating of Western architecture will be published throughout this week on Vagabond Journey.

Next post: Cuatro Cienegas: Pools of Life on the Verge of Death

Previous post: Continued Travels Around the Hinterlands of China