It is overwhelmingly interesting to me how blog storylines inherently weave in and out tales, yarns, and anecdotes of various real life people that the writer interacts with. People who, for whatever reason, either communicates continuously with the writer, or have made such an impression that the writer just cannot stop referencing them. For example, [...]

It is overwhelmingly interesting to me how blog storylines inherently weave in and out tales, yarns, and anecdotes of various real life people that the writer interacts with. People who, for whatever reason, either communicates continuously with the writer, or have made such an impression that the writer just cannot stop referencing them. For example, Andy the Hobotraveler has Craig, Mark, his mom, and me, and I have Stubbs, Mira, Erik, Loren Everly.org, and Andy.

Stubbs is a man who does whatever he wants. He cares little for approval, or if he has company or is alone. He is completely on his own cloud, which is one that happens to drift over the entire planet. He is scared of computers, girls, and monotony. He drinks his alcohol with romance, a sort of modern day Hemingway misanthrope. He acts like he does not like anyone. He probably doesn’t (except for me and his friend Mike in Peru). He says, “There is no greater friendship than that between two men” and things like “We are kings of the world,” while speeding through the night across a country by train. He loves Moby Dick. He also loves nothing more than sitting in a dimly lit room alone with a bottle of Scotch and a book. He is a writer who does not write to be read. But he has lately been finding humor in writing “letters to the editor” of a local Buffalo newspaper.

I know that he has a secret treasure trove of hidden writings that he will not let out. Someday, I vow that I will break into the vault and shower him with praises. He likes to be left alone, so why would he want me to shower him with praises? But I think that he should just take my praises and get it over with. It is just something that is bound to happen.

Stubbs is a genius, but one that does not waste time with all of that genius nonsense. He knows how to live. He rides a line that is close to the fires of life, sometimes even stepping a little too close and getting burned. He is, at root, a feral character who sometimes goes deep into the woods just to live as the trees and shrubs (while shooting his guns, of course). He is a good candidate for the original human.

His home is in the snow and cold. He was born in Buffalo, likes Alaska, has a thing for Siberia, and wants to go to Mongolia in the winter. He is also sometimes a Nova Scotian fisherman. We both love whales, and want to kill them like the whalers of old, and write about it like our hero:

I would not fight Stubbs. He is big, although he doesn’t seem it at first. I think that he grows in size proportionate to the amount of time that you spend with him. Now, I think that he is a giant. He has become a legendary bar fighter as of late, or so I’ve heard

“Stubb’s country” is how I referred to China for a long time, as he had lived and travelled over that great expanse for many years and kind of fits the character of the place. He has since given this title over to me though, and I hold it dearly. The first time that I went to China was with Stubbs in ’05. Whenever I pass his way he talks of returning to China or, more likely, Mongolia; so that he can live with outlaws, horse thieves, and packs of wolves, wear cowboy boots, and be a cowboy. Or just sit alone, cross legged in a gert. I think that he likes the sound of a one person per square kilometer population density. He could have an entire square kilometer to himself (that is how they dole out the land in Mongolia, you know).

When he finally finds the end of the lone moose trail, I will throw a party, because I will know that he just woke up one morning, looked out the window, shrugged, and decided that he just didn’t feel like doing it anymore. I don’t think that he will waste time with despair. It just doesn’t seem like a thing that he would do. He likes to laugh too much.

Stubbs knows how to live.

Stubbs is my brethren.

Mira posing in the ways of the Rajastani princes that she is. India 06.

Mira is the far-gone gal who is my lady. She did not become “far-gone,” she was born that way. Her parents are odd. She is Barak Obama’s cousin and calls him Barry. She also does not seem too interested in the fact that her cousin is running for the presidency of the United States of America. I suppose when people run for president they are not really people anymore. Mira thinks that she has to do things in life that she does not want to do. I tell her that she doesn’t, but she does not believe me. She has been travelling around the world for the past two years, and has lived in Costa Rica, India, and China. We have been travelling together for the past year, because she has nothing better to be doing. And she loves me.

Mira is a poet. But she does not care enough to share her poems with anybody else, because she thinks that poets are assholes. I tell her that she can be an unasshole poet, but she doesn’t believe me. All Mira wants to do in the world is sit on some far off beach, drink beer, and love me.

Mira also talks about writing masterpieces in Turkish cafes. She would probably love to smoke really long Turkish cigarettes while doing so, but I won’t let her. I tell her that smoking will kill her, but she doesn’t believe me.

Mira is wonderful and beautiful and has the unique ability to put up with me.

Mira is the girl that I love.

Erik is the logical, righteous counterweight to my thoughtless, free-flowing ways. He tells me when I am being too stupid. He tells me what to do when my weak skills of logic fail me.

He is the Confucius to my Lao-zi.

He is the yin to my yang, the yang to my yin.

He is also baldo. I like it that he is bald. If he were not bald then I would have some troubles, as we would not be able to laugh at each other as much (he would only be laughing at me).

We have been best-friends since the fifth grade. We were ice hockey line-mates, drank our first beers together, picked up our first girls together (well, I did), and he was right there to put out the fire on my head when my long hair fell down into my marijuana smoking bowl- that I made from a Chi-Chi’s cardboard placemat- and went up in blazes- we were 15 years old and thought that we were cool. We also played in bands together. Abe Gjerdan was the first- and we sucked, Solution Agent 63 was second- and we really sucked, The Dregs of Society was third- and we sucked too, but nobody knew it. We went on a tour of the USA right after highschool playing music. We played a brothel in the woods of Connecticut, an empty bowling alley in Illinois, and ended up on the Upper Peninsula of Michigan trying to sleep on a trampoline while young timber children were running around swinging chainsaws by our heads and laughing about it.

Erik is the funniest person that I have ever met. We have known each other for so long that our humor kind of evolved off of each other. He also knows how to get me into trouble. I do not know how many times that I got kicked out of high school because of him. “Do this. . . ,” he would say, “Wade, do that to . . .” I would do it. We would laugh. Then I would get kicked out of school. It was thought that I was the trouble maker, but it was actually Erik, behind the scenes, who was real impetus behind my actions.

Erik is now in flight school flying airplanes. If he would only marry me I could get free flights to anywhere in the world as often as I wanted. But I don’t think that he will marry me, he is waiting for True Love. Who this True Love is, I don’t know. But Erik is a true romantic in every sense and will wait for as long as it takes for real love- and will not accept anything less. He is not worried. He knows she is coming.

Erik is the best friend that a man can have.

Erik is my Brother.

Loren Everly.org trying not to be a Romeo to the pretty young Mongolian girl who is trying to propose to him in this rail car. Mongolia 07.

Loren Everly.org is a traveller. He also writes of his travels on his website, appropriately named . He seems to be a lone dog kind of traveller, who does exactly what he wants to, whenever he wants to do it. It is hard to come by people who also want to do what you want to do (how I found Mira, I do not know). I hitch-hiked across China from Mongolia with Loren in the summer of 2007. He is a travelling machine. He has complex road maps stored in his brain that can be automatically recalled at will, he does not have to eat food, and does not need water. He almost starved me during that journey. He is also not afraid to give a sleazy bus driver the old stone-face when he does not feel like paying. He is bold and knows how to get from point A to point B under any circumstance. I think we walk on a similar beat.

Loren Everly.org is my colleague. 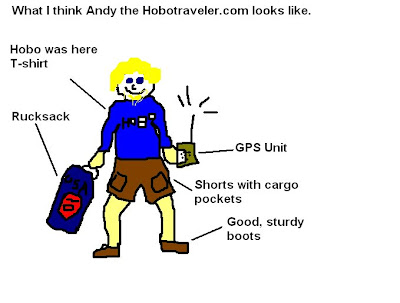 Andy the Hobotraveler is simply iconoclastic. He has been travelling the planet for the past decade just writing away about it on his website: (http://www.hobotraveler.com/). His writings are practical, useable, and seem to sink into the back of your mind like the lessons of your mother. His blog is instructional: it not only provides descriptions of places to make you want (or not want) to visit, but also tells you how to do it. He tells us how to properly use a mosquito net, how to navigate in Africa, and how to pack your bags. He also provides me with the occasional inspiration to keep going whenever I get a little tired. Andy has the endurance of an Arctic Tern.

As a person, Andy is an enigma to me. I have never met him in person. He is one of the least revealing travel writers that I have ever come upon. It almost makes you want to squeeze the computer screen in hopes that a drop of information about him will fall out. Travel writing is, ultimately, a route of revelation- the writer reveals places, people, and, in the process, themselves. Andy has the genius of only showing himself in small, skewered doses that makes you rush to the computer each morning to find out what he wrote the day before. He has hooked 10,000 of us in this way.

Andy is my mentor.

So this paltry bunch is my caste of characters. Please follow and enjoy their follys, musings, and errant ways from here on out. We will all love you for it.

Filed under: Friends
0 comments… add one