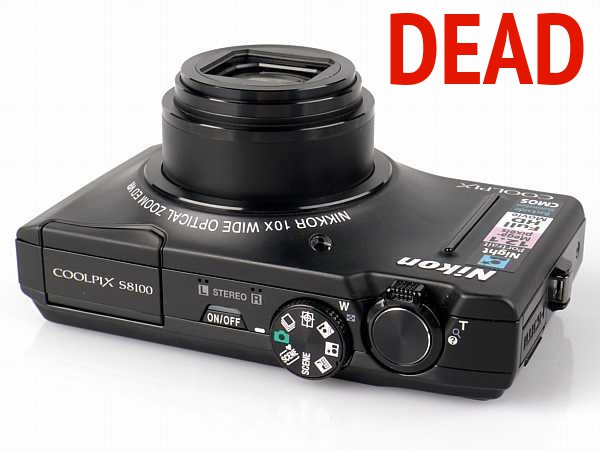 Another camera bites the dust. Oh well, move on, go shopping, pay up.

My Nikon Coolpix S8100 is no more. A short fall and this camera that has served me well through traveling in Iceland, Colombia, Mexico, and for the past seven months in China was broken beyond repair.

I have always been weary of the motorized, extending lens portion of digital cameras. For cameras that have them, these mechanism are the weakest point on the entire machine and is the first thing that usually breaks. There are just too many moving parts for these lenses not to be fragile. For many years I avoided buying cameras that had them, but necessity demanded that I increase the quality of my photography on this site, so I went for performance over durability before taking off on a bicycle trip to Iceland in the summer of 2011. Finding a dslr too bulky for my modus operandi I ignored my general “no extendable lens” rule and went with the Coolpiz S8100. Surprisingly, this camera lasted for more than a year before finally breaking.

When this camera did slip out of my hands and fall three feet to the floor of a hostel in Beijing with it’s lens extended I did not have much hope for it. While I understand that normal usage for a camera does not constitute dropping it, it’s my feeling that they should be able to take some degree of shock. The fall wasn’t even that hard, but when I picked it up the lens column was contorted as it sat askance in the body of the camera. The words “Lens error”  flashed on the LCD screen. The thing was done.

Motorized extending lenses have pretty much zero shock tolerance: one good bump and it’s done. You simply can’t drop a camera with its lens extended and expect it to survive. The worst part is that it’s not my impression that these lenses are really fixable: convention says that you just buy a new camera.

I joke that I’ve broken more cameras than any traveler in history, so finding my cameras wreaked and dysfunctional is not something I moan or whine about anymore: it has just become normal part of travel. I expect my cameras to last through 12 months of travel — if I get this I’m happy. In reality, I probably pay roughly $1 per day for my cameras. If they last for as many days as the dollars I pay for them I consider it a successful investment.

Travel is hard on cameras. This is the bottom line. Even those “tough,” shockproof, waterproof cameras often don’t last out the long term rigors of the road. So I found that there is no reason to sacrifice performance for durability, and I’ve just accepted the fact that I’m going to break my cameras regularly as I move through this world.

Get over it, go shopping, get a new one.

Next post: Personal Space in China: If There’s a Free Space, Take it