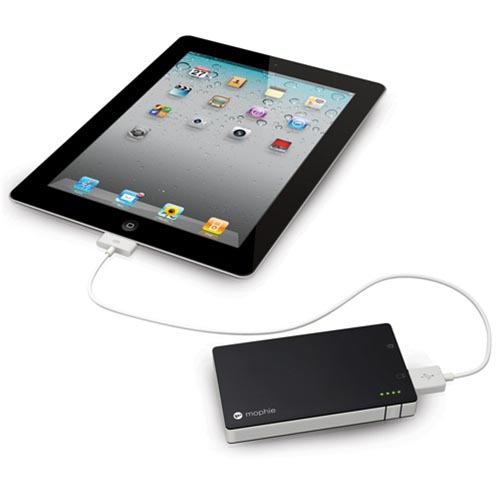 MyCharge trumps Mophie in the battle of the batteries

What is the best portable battery charger for travel? We test the Mophie Juicepack Powerstation and the MyCharge Portable Power Bank to find out.

Published on November 8, 2012 by Tiffany Zappulla

There are two ideal times to have the security of a portable battery charger on your person: 1.) when you are traveling, especially in or around areas with no accessible outlets, and 2.) during a blackout. Thusly, I took the opportunity to compare the effectiveness of a Mophie Juicepack Powerstation and the MyCharge Portable Power Bank 3000 when Hurricane Sandy, nature’s great Mayan eclipse, made landfall on my humble state of New Jersey this week. I was fortunate enough to have power throughout the entire ordeal, but I was able to “juice up” my phone prior to Sandy’s touchdown and the chargers made the rounds to various friends and family members in need.

What makes finding the best battery charger so critical for a traveler (or a hurricane victim with no electricity)? First of all, at $50 and up, external battery packs are no cheap investment. Secondly, should an emergency situation arise, the wise man gets more bang for his buck. For travelers, inconsistent environmental factors – such as changes in temperature, your phone’s constant search for a signal in new places, and the drain from geolocation apps – siphon more energy from devices than when more stationary.

That being said, which of the two chargers offer more to portable energy-suckers? Mophie, a brand renowned for Apple devices, trumps MyCharge, a comparatively unknown company that specializes in charging devices of all types (including the previously-reviewed PowerBag) in terms of popularity, but which device actually deals the higher hand when it comes to functionality?

The chargers being compared have different charging capacities: the regular Mophie Juicepack stores up to 4000mAh of energy, while the MyCharge 3000 appropriately stores up to 3000mAh. For the purposes of this review, I thought it would be useful for readers to know just how much of a difference 1000mAh makes. Those readers interested solely in high-performance models can check out the 6000mAh Mophie Powerstation PRO which, aside from the characteristics of the regular Powerstation described below, also features a rugged, IP65 (dust and water-proof) exterior. Also of note is that, well, MyCharge no longer sells this specific Power Bank 3000 model, even though I received it only a few weeks ago. Its heir is called the Summit 3000, which has comparable specs but a much more innovative design.

So for the thrifty gadgeteer, does it really pay to invest in a 4000mAh high-capacity charger? Price-wise, it does: both the Juicepack and Power Bank 3000 retail for $79.99, even though the latter technically offers less power. But when it came down to the nitty-gritty – that is, the actual charging time – the MyCharge emerged as the victor in terms of both the speed of the charge and the amount of power remaining in the pack as per the indicator lights. All Mophie chargers have only four indicator lights, making it more difficult to decipher how much power you have left, while the MyCharge has six. The MyCharge also has a hold button while the Mophie does not, and the Mophie power button is sensitive enough that it could be charging in your bag without your permission for hours on end.

While the difference it time it took to charge the actual phone was negligible (about an hour to go from 50-100% on an iPhone4S for each, a few more minutes for the Mophie), the MyCharge wasn’t even phased by the task, losing 1/6 lights, while the Mophie dropped an entire indicator light (out of 4) after the charge. The most significant difference was in how long it took each adapter to recharge itself: from dead to full, 4.5 hours for the MyCharge and a whopping 6.5 for the Mophie. It would take nearly an entire night’s sleep, or shift at work (minus the lunch break), or what have you, for the Mophie to recharge itself after charging your smartphone twice, whereas you could get the MyCharge back in business over the course of a moderate layover.

For a real-life comparison, the Mophie has not lasted much more than one day on the road charging just one smartphone, while the MyCharge charged several (a smartphone and 3 dumbphones, to be exact) during this week’s blackout over the course of 24 hours. Of course, exact charging capacity will vary drastically depending on how many devices you charge and how much energy each requires.

The design of each charger is what really sets them apart – and completely sets the MyCharge on a pedestal above the rest. Both chargers will work with any device – USB, MicroUSB, iParaphernalia – but the MyCharge also comes with built-in cables. In other words, you can charge anything your heart desires with the Mophie, but only provided that you remember to bring your cable with you. The MyCharge frees you of pesky cables and is lighter than the Mophie to boot. The MyCharge iPhone cable is not compatible with iPhone5, but you can still charge an iPhone5 if you bring the cable (one of the many reasons I stick to Android phones, but I’ll leave that squabbling for another review).

The Mophie is sleek, sure, but if style is really all you’re looking for in a battery charger, you should definitely re-evaluate your need for one. Mophie also offers a both chic and ergonomic array of battery cases that seamlessly snap onto your iPhone, which is a worthy $80+ investment…until you upgrade your iPhone and it no longer fits the case.

That is not to say that the MyCharge is an eyesore, however – in fact, many of the 2000mAh Power Banks flagrantly mimic the look of the Mophie Powerstations. Yet the 3000, due to its exposed cables and pin connectors, is perhaps not as road-ready as the blocky Juice Pack. Also of note is that the updated Summit version has a built-in wall charger so that a cable is not even required to recharge the pack itself. Mophie, like the Apple devices it is specialized for, is minimalistic, but in the case of hardware, its minimalism only detracts from its efficacy.

Considering that most travelers will be charging on the go, an adapter that stores well while charging would be most convenient. Unfortunately, most external battery packs – the Juice Pack and Power Bank included – hook up with some awkwardness. If using the Mophie, or the MyCharge with a cable, the best you can do is wind the phone around the charger and store in a bag or backpack pocket. If using the MyCharge without an extended cable, devices requiring MicroUSB can’t even be folded up beside the charger but instead end up sticking out cumbrously alongside of it. (The Summit’s design does not fare much better.) iDevices would fold with screens facing the charger, which could lead to scratching if your device does not have a screen protector.

As aforementioned, although Mophie’s market is primarily the Apple crowd, both chargers are compatible with practically any device excepting laptops. Since both chargers also charge themselves via USB, you can even charger your charger in your car if you have a car adapter. This also makes charging more convenient internationally, wherein the USB cable can be plugged in to an international wall charger.

Think about it: you buy a portable battery charger because you need energy stat, right? Therefore, a charger that will keep you constantly in search of an outlet – even though you just dropped as much money on a charger as you did on your phone – is going to be the prescription for deadphone-induced headaches. It also pays to invest in a charger that will withstand the test of time (and new product upgrades), is convenient and light enough for travel, and is guaranteed to hold your energy in when not in use.

Although the competition was steep, the MyCharge gets my vote for overall functionality and power. What really sets it a notch up from the regular Juice Pack is the fact that you can, technically, charge up to five devices at once. Mophie offers a duo charger with up to two ports, but falls short from there. Sure, by charging multiple devices you’ll get less juice per gadget, but it comes in handy in group traveling situations. While not significantly less expensive than other external chargers of its kind, it’s a better value for the money, and with built-in cables, more likely to save you should you lose or forget your cable on the road. It may not be able to survive a dive off a cliff, but it will at least get you to the summit…and the face time with your friends that awaits you.

Get the battery chargers mentioned in this review

Next post: Visiting Old Mutianyu Great Wall of China Without a Tour

Previous post: China Selects It’s New Leaders Amid Scandal, Corruption, and the Year of the Dragon