A live chicken with its feet bound was removed from a burlap sack and laid down upon the church’s floor. Three rows of perhaps a dozen candles each were placed in front of the chicken, all were fully blazing. A bottle of Coca-Cola sat to the right. A heavy set matured woman in a long dress emblazoned with a purple flower pattern was kneeling behind the offerings, sitting on her heels. A young man was kneeling next to the woman, and an older man with a mustache took up the same position on the other side. All three adults were rocking back and forth, chanting prayers in Tzotzil. The woman then withdrew a kitchen knife, and with a quick flick of her wrist the chicken was sacrificed. 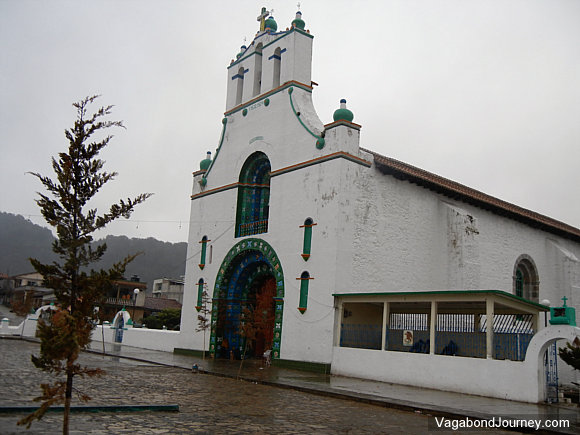 A live chicken with its feet bound was removed from a burlap sack and laid down upon the church’s floor directly behind dozens of candles which were fully blazing. A bottle of Coca-Cola sat to the right of the scared stiff chicken. A heavy set older woman in a long dress emblazoned with a purple flower pattern and a black sheep skin over-skirt was kneeling behind the offerings, sitting on her heels. A baby was wrapped tight to her back in a colorful clothe, only its head peaking out. A young man was kneeling on one side of the woman and an older looking man with a mustache that drew to sharp points around both flanks of his mouth took up a position on her other side. All three adults were rocking back and forth, chanting prayers together in Tzotzil. The woman then withdrew a kitchen knife from a plastic bag, and with a quick flick of her wrist the chicken was sacrificed.

The church of John the Baptist in San Pedro Chamula in the Central Highlands of Chiapas is an epicenter of traditional Maya and Catholic syncretism. As I walked through it, there were perhaps a dozen two to eight person groups of Tzotzil Maya worshiping as they knelt on the floor of the church’s nave, praying in their native tongue, and making offerings of bottles of soda, a liquor from this region called pox, and animals. Most of them were wearing traditional clothing — sheepskin vests, wool over-skirts, and flower pattern dresses — but various individuals, mostly young men, within the gatherings also wore standard Western style jackets, jeans, and t-shirts. The worshipers were either huddled together around shrines for various saints or they were crowded around the alter beneath Jesus hanging up high upon the cross. They issued their prayers and sacrifices to their deities as they have been doing for millenia before any Spaniard step foot in the new world carrying the banner of Christianity.

There were no pews in this church, just a big, open nave with shrines for saints, complete with their statues, running down both walls. Thousands upon thousands of candles covered the shrines and tables which lead right up to the alter, where Jesus presided over all like in any other Catholic church. The candles covered everything, their wax melting down into ever growing piles on the floor and over shrines. The open flames sparkled and illuminated the inside of the church, reflecting off of the glazed statues, metal decorations, and stained glass windows, setting the scene with a dark orange light. Pine needles covered the floor in a one inch thick mat, each needle being said to be the soul of a departed ancestor. The air was filled with the pine smell of copal, a resin based incense.

According to the Maya cosmology there is a finite amount of good in the universe, which is exchanged like a commodity from person to person, man to deity, and deity back to man. One way to receive good will from God is to make a an offering of good will — which often takes the form of a sacrificed animal, liquor, or soda combined with rhythmically chanting prayers and the lighting of dozens of candles. It is my impression that giving good is thought to create a sort of goodness vacuum which sucks good back to the pious worshiper. Often, I have read, that the Maya in Chamula are praying and making offerings to the saints/ deities for good health, good fortune in important life events, or to ward off evil will. I observed two chickens, countless bottles of pox and soda being sacrificed and offered during my visit, but, reputedly, dogs and cats are also occasionally brought in and killed all the same on the church floor.

I asked a woman, who had just finished sacrificing a chicken and making other offerings and prayer, if she was going to eat the chicken later. She quickly answered in the affirmative. After the sacrifice is killed and the ceremony is completed, the chicken is taken home and becomes diner. The same goes for the pox and soda. They are often drank by the worshipers immediately after the chanting has concluded. It is said that the alcohol and soda makes the worshiper burb, which releases toxic spirits from their bodies. There were various men in the church who seemed to be drinking pox extra-ceremonially — perhaps trying to get out as much toxic influence as possible — as their liquor stained breath vied with the incense for the most powerful odor in the church. Though they were smiling — sometimes toothlessly — as they sat back, looked over the candle illuminated church interior, having just finished their worship. 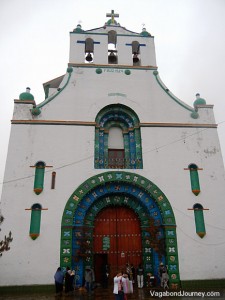 The Catholic church of Saint John the Baptist at Chamula

The church of Saint John the Baptist in Chamula is one of the only ones in Mexico where this unique syncretism of ancient Maya and Catholic belief systems is practiced to such an open and unabashed degree. The Maya in this church identify as Catholics — as do slightly over 50% of the people of Chiapas. What is called “traditionalist Catholicism” is actually a combination of indigenous and Spanish beliefs, the Catholic overcoat, iconography, saints, churches, and elements of worship are often being veneers — fronts — for the Maya to practice their ancient faith. In this expression of religions syncretism, the Catholic Virgin Mary, the Holy Trinity, various saints, archangels, and even the devil become the “faces” of traditional deities and ancient heroes. Angels, for example, now represent the rain deities of the indigenous Maya belief system.

Today, traditionalist Catholicism among the Maya is its own unique religion, as both belief systems intertwined themselves together and have been evolving in unison for hundreds of years. Chamula is a well known location in the Maya world where the ancient spiritual influence rises above the surface and makes itself not only evident, but vibrant.