Lonliness, Traveling, and the Open Road

Loneliness, Traveling, and the Open RoadThis was originally written for Travel Blogs.com“To be free, you had to be alone, always, everywhere, and above all amongst people. . . Wandering and alone in a world in which he could always stay unknown, Orschanow was really free. He thought and acted as he wanted to, and no [...]

Loneliness, Traveling, and the Open Road

This was originally written for Travel Blogs.com

“To be free, you had to be alone, always, everywhere, and above all amongst people. . . Wandering and alone in a world in which he could always stay unknown, Orschanow was really free. He thought and acted as he wanted to, and no one could pretend to control his thoughts, since all he needed to do was to leave, at the first clash of views, and set off on the road again.”
-from Isabelle Eberhardt’s Vagabond

I read this above quote and realized that it contains a large amount of hard earned wisdom. After 9 years of continuously traveling the world, both with companions and alone, I know that to be able to completely live on the ends of your own intuition – perhaps a working definition of freedom – it helps to travel alone. But to travel alone means wooing the beast of loneliness and solitude.

But I must mention here that loneliness on the Road is of a completely different character than the same affliction in an at-home setting. In travel, the feeling of loneliness can often times be used as a tool to extinguish itself. When I feel uncomfortably lonely when traveling, I talk to people. It is a simple formula. The world is full of people, and if you are traveling you have the ability to sample this depository til your heart’s content. You can start up conversations with dozens of people a day when wandering and not a single one of them has any inherent consequence. If you talk to someone and find that they do not understand what you are saying, then you can just move onto another person. If you make a friend and realize that you do not like him then you can just leave. If you find that you are in a setting which prohibits conversation then you have a full range of options to change it. When traveling you are essentially outside of the box of all convention – you are in a land of little social consequence. You can say anything to almost anyone and it does not really matter. You may be scoffed at 9 out of 10 times when trying to communicate with strangers, but you still hold on to a possibility that you will eventually make a friend. 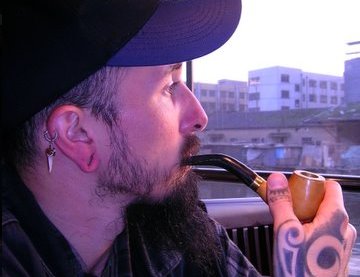 A traveler has the ability to chance their circumstances at ANY time. If you do not like the way that you feel, it is your responsibility to change it. There is no one to relay on but yourself when traveling solo, and you possess the key to your ambitions, desires, and fairy tales. To recognize the ability to make yourself happy is the freedom of the Open Road.

I find that loneliness goes away from the simple act of speaking. So I talk to the birds, I talk to the animals borrowing on the side of the road, and I even talk to the odd human every once in a while. If I have a conversation with someone – even if it is extremely simple and inane, even if it is just in pantomime – I find that the lonely feelings blow away. The act of speaking does not only have to be for the purpose of communicating the meanings of words alone, but also for the side effect of simply making a base connection with another person. So I speak inane words and I am given inane responses, but I feel better for it. It seems as if simple verbal connections are enough to slay the beast of loneliness.

Hut in the woods on Brooklyn’s prospect park. It was my hermitage for a day.

The ways in which I make connections with people while traveling vary in accordance with the landscape. If I am in North Africa, where there are plenty of cheap street-side cafes, I pick one that has a good bunch of people, sit down, and start talking to someone – they usually talk back in some language. If I am in Eastern Europe, where beer sells cheap, I find a crowded local bar and start talking in English – someone usually talks back and I make friends. If I am in Latin America, I find a cheap hostel and stay there for a night or two. If in east Asia, I hitchhike and practice my Chinese and Japanese with the drivers. The ways of making simple contact with people while traveling are endless. You are a traveler, you can do or say anything to anyone and there are little social consequences. The traveler is the ultimate social wildcard, you can go between all classes and sects of a culture equally, as there are no boxes to put you in. You are free to talk to princes or paupers, all you have to do is do it. Oftentimes these little conversations bloom into real friendships, and you find that all semblance of loneliness fades away as quickly as they were formed. There is little reason to ever be lonely when traveling unless this is how you want to feel. The traveler chooses their own Path every step of the way.

But oftentimes loneliness is not so bad. It is just a feeling, and like all other feelings people must occasionally let it flower freely to be balanced. I often find myself lonely on a stormy night with no urge to extinguish the feeling. Sedentary society often has a major aversion to loneliness that is not really applicable on the Road. Many lonely, solitary nights have made up some of my best memories while traveling. When sitting alone in a tent on a dark night while thinking of the lover or family that you left behind you begin to feel that deep sense of love that only distance can make thick. It is usual for me to long for people when I am traveling, and I let these feelings come and go as they wish. I have found that fighting against feelings of loneliness is the surest way of making them grow. I once had a stretch of travel in Patagonia where I did not really talk to anyone for over three months. I was lonely, but I found that it was not so bad being lonely. People living in sedentary society seem to rely on other people for their happiness, and loneliness is a shear indication that something is going wrong. But while traveling I have found that I am responsible for my own emotions and feelings. I am alone and lonely relatively often, and I have learned that it is not so bad. When traveling I know that I can always change my circumstance, and I have learned to appreciate the insights gained from the occasional bout of loneliness.

I have set out on many solo journeys just to realize that I am very seldom ever alone. The world is full of people, there are many options for breaking a stretch of loneliness when it arises. Fortunately, I have found that I seldom ever travel into unfriendly territory. It is my impression that people are oftentimes just as interested in talking to me as I am to them. So if I want to talk to people, then I talk to them; if I feel a little lonely, I either do something to change it or simply enjoy it. Loneliness it is not always a detrimental feeling that should be purged on first contact.

Previous post: Begging for a Laugh in New York City