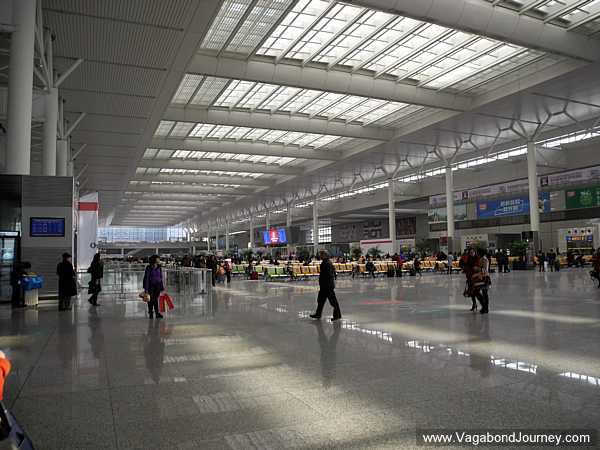 Hongqiao station in Shanghai, which opened in July of 2010, is currently the largest train station in Asia. It is 1.3 million square meters in area, has 16 platforms, 30 tracks, and it’s main building measures 420 X 200 meters and is 70 meters high. The train station’s waiting hall area alone is more than 10,000 square meters (107,639 square ft), and is capable of handling 10,000 passengers at once. There is also an array of 20,000 solar panels covering an area of 61,000 square meters on the roof which has been called the world’s largest stand alone integrated photovoltaic project.

But as I walked into this massive station I realized right away that I wasn’t just in an oversize train station, I was inside of something new. Hongqiao station looks like something out of an engineer’s Gattaca fantasy: faceless, grey, overwhelmingly spacious, uber-functional, stylistically pragmatic, dare I say, futuristic. The corridors in the arrivals hall were big enough to serve as lanes for tractor trailers, the ceilings of the departure lounge were high enough to house an aviation factory, and it was all blanketed from floor to wall to ceiling with large, square, grey tiles as though it was a parody of what dreamers in the 1960’s imagined buildings in the 21st century would look like.

But the future, in this instance, meant reworking a mode of transportation that was defined in previous centuries for the coming age. Rail travel was reborn in China with the creation and proliferation of the high-speed trains that now criss-cross massive stretches of the country, and Hongqiao station is at the heart of this movement. Serving as the hub for high-speed trains out of Shanghai — which could be called the high-speed rail travel hub of China — this station shows what rail transportation will ideally be like in this coming era.

I walked into the station via its first floor arrivals hall and its grand size and spaciousness quickly struck me as unique. It was as if the station was built out of scale, as though it were created for users slightly larger than human size. Even on the below ground level, the ceilings were enormously high, and the pillars supporting it also seemed overtly exaggerated. The departures hall was the masterpiece of the station, and was as massive as an airplane factory — a giant arch strewn with windows made up the ceiling, and the amount of empty space between it and the floor surface was, simply put, oceanic. Standing in this place made me feel like an action figure.

Unlike many other train stations in China where people vie for space, fall over each other, and cram their way through the masses of their brethren as they move about, Hongqiao station provided everyone with more than enough personal space — in fact, it seemed overtly underused. Though the Chinese are very good at making themselves compact when in crowded places, when there is enough space they spread out and take as much of it as possible for themselves. I’m unsure if Hongqiao’s large scale design was for the purpose of providing passengers with a less hectic, more grandiose travel experience or if they were just preparing for the hoards of passengers they predict will come with further development of high-speed rail transport, but, as of now, this station has the highest free space to passenger ratio that I’ve ever experienced anywhere in the world.

What I do know is that the simplicity and spaciousness of this station’s designed seemed to be intentional. You look out upon the departures hall and there is nothing to obstruct your view from one side to the other — a distance of nearly four-tenths of a kilometer. There are no dividers between seating areas, no walls between waiting rooms, no corridors, no steel rail passageways to direct the flow of passengers as though we are livestock. No, you look out on the departures hall and all you see is a big light up board showing the train timetable and a sea of seats. Even the restaurants and bathrooms are blended inconspicuously into the walls of station, as not to ripple the smooth fabric of its absolute spaciousness. I’m unsure if the designers of this place set out with the intention of decreasing the stimulation overload that is often inherent to train stations throughout the world, but the long trajectories of sight through wide open space that they created does just this.

Hongqiao station was probably the most simplistic major train station I’ve ever been in. You buy your ticket downstairs, walk upstairs and find your gate — which is almost too easy to do as it’s all in one big room. Passenger train stations do not need to be complicated structures. All they are, in essence, is a ticket counter and a waiting room that sits adjacent to some tracks. Train stations are simple pieces of architecture, there is just not much that they need to be fully functioning — but, as I found with Hongqiao station, a lot of extra space definitely helps.

I am the founder and editor of Vagabond Journey. I’ve been traveling the world since 1999, through 90 countries. I am the author of the book, Ghost Cities of China and have written for The Guardian, Forbes, Bloomberg, The Diplomat, the South China Morning Post, and other publications. VBJ has written 3650 posts on Vagabond Journey. Contact the author.

Previous post: Airport Security: Backscatter and Millimeter Wave Machines, What They Are And How To Tell the Difference

Tulum Is The Worst Tourist Trap On The Planet