Cross-Cultural Impasse, Or A Barbarian In Civilized China

I try walking down the street in Xiamen with my kid when it was raining. This is against the protocols of this culture. 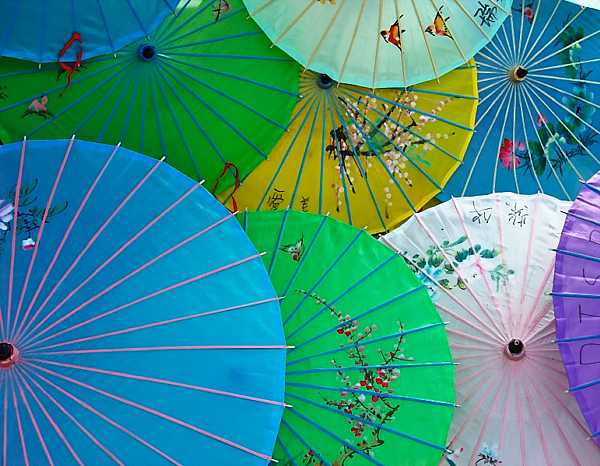 I went to pick my daughter up from school as it started to rain. Shit. It wasn’t the rain that was the problem — Xiamen is hot, and a little shower from time to time is refreshing — but the fact that the people at her school would more than likely freak out if I dared take her outside during a weather event.

Urban Chinese tend to be extremely urbanized, meaning that they generally have a relatively strong phobia of anything that could be considered natural. Things such as rain, insects, heat, cold, wind, and, especially, the sun are to be avoided at all cost. These are people who apparently carry umbrellas 365 days a year in an effort to keep the natural world at bay. Heaven forbid rain or the rays from the sun touch their skin.

3,000 years of civilization has apparently created an underlying agoraphobic buzz in this culture.

But I’m a backcountry American. I grew up in the sticks where I was outside all day long, no matter if it was raining, scorching hot, glaringly sunny, windy, or if 5′ of snow covered the ground. I have no culturally injection reversions to nature or the things that are born out of it. I do not fear sunny or rainy days, I like them both. Umbrellas are for Nancys.

But my kid is being raised in between my boondocks ethics and the uber-urban phobias of China. I cringed when she started yelling and screaming a few weeks back about being out in the sun, wailing that she needed an umbrella.

“Chinese people carry umbrellas so they can have the shade wherever they go,” she spoke tritely.

That’s true, I had to admit, but they are also terrified of getting a tan.

Whatever the case, when in China there are two ways of doing things:

The Chinese way and the retard way.

Foreigners do things the retard way.

While all cultures think their ways of doing things are best (as they should, it would be pretty stupid if they did things in ways they felt were inferior), in China this seems to be taken to the extreme. There is little “foreign people do things differently” leeway here.

When you do something different you’re treated like a completely stupid, ignorant, uncultured — though potentially amusing — buffoon who has simply never been shown how to do something the right way. It’s like we grew up without mothers and were never taught how to clean ourselves. Getting all liberal and trying to explain that people do things differently in your country and diversity is good is like confirming a fact they already know: foreign people are idiots. Though they tend to be overtly generous, and will often jump to the fore and give you a lesson on how to do something the right way (i.e. the Chinese way).

So when I picked up my kid from school in the rain I knew what was coming. I got in, swooped her up, and tried to get out as fast as possible without anyone noticing that I was going to subject my kid to, HOLY SHIT!, weather.

I chuckled to myself as we walked a half block and I thought I’d gotten away. But then a voice came shouting from behind us:

One of the other parents at my daughter’s school dug an umbrella out of somewhere and was pitter-pattering down the street after us. She was totally and completely concerned, as though the rain would make my kid’s skin melt or something.

I couldn’t hold back a growl:

“We are Americans, we don’t fear rain!”

“I fear rain!” my daughter countered, “I want an umbrella!”

“No you don’t, you’re not a Nancy, you’re an American” I scolded her as we slithered away.

The woman running after us with the umbrella admitted defeat. What an idiot, I imagined her thinking.

Chinese people watch out for each other. They show affection by helping their family and friends do the most benign and simple things imaginable. Walk down the street with a Chinese friend and they will almost invariably warn you about every little thing:

“Watch your step, there’s a curb.”

They generally treat you as a small child. In my culture we find this sort of offensive, as though were being insulted by someone who thinks we can’t take care of ourselves. But here, it’s endearing: it’s what friends do to show affection.

They don’t just jump to the fore and help out foreigners with the simplest of task either, but this is just the standard protocol for expressing friendship. It’s a way of showing they care.

But as a foreign idiot who does things the retard way as a standard operating procedure, you’re a walking target for this kind of pampering, and it can feel belittling and more than a touch overwhelming.

I’ve been in China off and on since 2005, and though I understand and appreciate this aspect of the culture, I still can’t help but to find it f’ing annoying.

I’d rather get wet out in the rain.

Previous post: The Bulging Crotch In Advertising In China