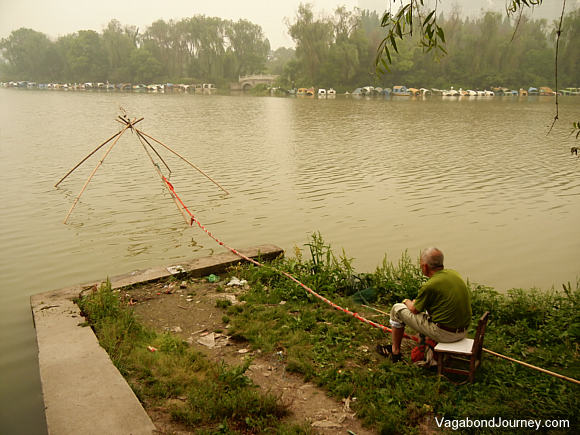 Net fishing in China is an ancient practice that is still continued today. Here are some of the various types of fishing nets and methods.

The rivers, lakes, canals, and streams of China are often perpetually flanked with fishermen. Some use rods, while others use nets. The following video and photos are of some of the more popular types of fishing nets that are used across Jiangsu province.

This fisherman pulls back on the red rope to raise the net.out of the water.

This type of fishing net is incredibly common all around China. It’s made of four bamboo rods that are attached at the top end like a tepee and has a net spanning across the bottom, which is spread open. A rope is attached to one of the rods (the red fabric in the photo above) along with another bamboo rod. The fisherman baits the net and submerges the entire net portion of the apparatus in the shallows of rivers, canals, and lakes where the current is not very strong and fish like to hang out. The fisherman then waits for around 15 minutes before pulling on the rope, which angles the top of the net backwards, and, using the extra bamboo rod as leverage, raises the net out of the water. The fisherman then checks to see if any fish were caught. If so, he pulls the net over to the shore and removes his catch. If not, he releases the rope and the net falls back into the water.

Another type of Chinese fishing net.

Removing net from a lake.

This is another type of fishing net. I’ve seen this style all over the world. It’s basically a series of square rings that are sewn into a tubular net. The rings are spaced out like a rib cage, and they create a cavity for fish — mostly small minnows — to swim into. One end of this net has a small opening and the other end has a string attached. The fisherman puts bait into this net and then tosses it into the shallows of a body of water and waits for the fish to enter through the small hole.

This type of net is also very common and incredibly simple. It’s essentially just a big net that’s tied down on one end and then attached to bamboo poles on the other. The net is then submerged into a lake, canal, or river, and left in waiting for fish to hover over it. Periodically, the net is quickly raised up by the bamboo poles and whatever fish that remain inside of it are collected.

A type of Chinese fishing net.

This is an interesting type of fishing net, and is probably the most common around the eastern parts of China. This net is submerged across the current of a river or canal like a fence, and catches fish when they attempt to swim through it. When the fish hit the net they often get tangled up and stuck in the webbing, whereupon the fisherman can pull them in. From my observations, this type of net can potentially bring in dozens of fish at a time. The fisherman in the above photo caught at least ten mid-sized fish from a single cast.

Fisherman floating in a homemade raft setting a net.

I had a difficult time believing what I was seeing when I peered out across a river and saw this: a man riding on a homemade raft of garbage. He is floating on what appears to be old plastic jugs and buckets that have been sealed airtight and firmly tied together. He used this raft to set a fishing net like the one outlined immediately above along a part of the river that cannot be easily accessed on foot. His raft did the job — he didn’t sink when I was watching — but it seemed incredibly difficult to maneuver, and it took him ages to go even short distances.

Fishing is an integral part of Chinese culture and is still a vital food acquisition strategy for many people. While some rod fishermen seem to be doing it for recreation, many of the net fishermen are in it for sustenance. Many of the fishing nets and methods outlined above are ancient, their designs changing little over the passing centuries and, perhaps, millenia.

Read about rod and line fishing in China here.

Previous post: China Absorbs Other Traditions and Makes Them Chinese