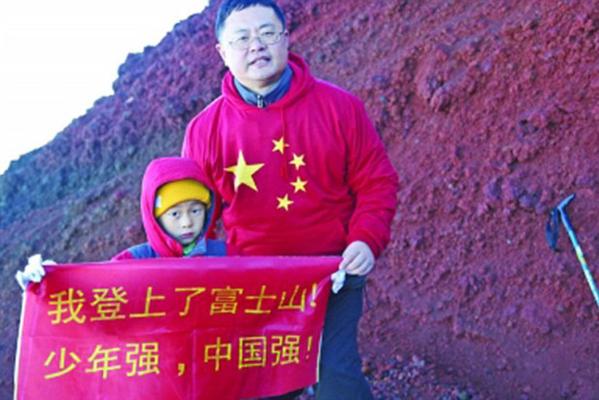 Chinese Father and Son Attempt to Climb Mt. Fuji, Dad says “Where are the stairs?”

Eagle Dad and kids make it to 11,000 feet on Mt. Fuji and unfurl patriotic banners before needing to be rescued.

They call him Eagle Dad. He became known across China for subjecting his 4 year old son to feats of physical endurance and bravery — such as doing push ups in the snow and going sailing solo. He says he wants to make his son strong because he was born prematurely.

His latest mission was to climb Japan’s Mt. Fuji with his son and daughter on a patriotic mission to show the prowess of China’s youth (i.e. his children) and unfurl a banner that says that the Diaoyu Islands belong to China.

They didn’t make it, but it seems as if they made their point.

Provisioned with only a single bottle of water and a chocolate bar, Eagle Dad and his kids stormed over a gate and attempted to scale Fuji when the mountain was official closed to climbers. Part way up they were met with strong wind, but Eagle Dad trudged on. It wasn’t until his son collapsed in tears and altitude sickness that their China power seemed to have run out.

Just before being saved by the Japanese mountain rangers they held up their patriotic banners for photos. I’m not sure if this was the glorious triumph they hoped for, but it seems to have done the job.

“Um, would you mind saving us now?”

Eagle Dad admitted his error of judgement, stating that he took it for granted that there would be steps and shops all the way up to the summit of the 12,000+ foot mountain.

Hey, why would he think any different? Popular mountains in China ARE lined with stairs and vendors.

(Read more about Tourism in China.)

Eagle Dad made a global ass of himself, but the fact remains that he did manage to get his kids up to 11,000 feet on Fuji without provisions and in the off-season before needing to be rescued. Point taken: that’s one strong kid.

This father is impressed, but I don’t think I’ll be signing my daughter up for the next Eagle Dad training course.