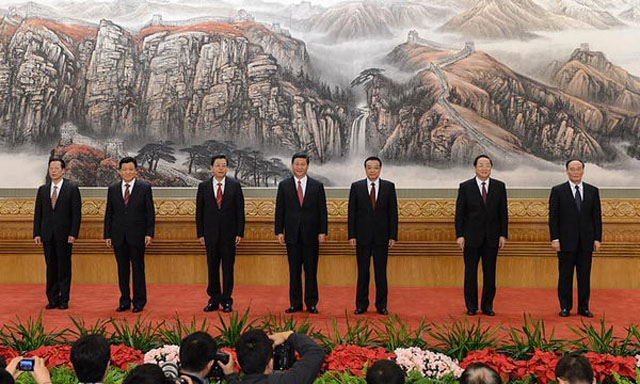 The Chinese Communist Party selects China’s new leaders as the princelings come of age and ascend to the throne.

After a rough ride full of scandal, corruption, infighting, and alliance shifting, the 18th National Congress has drawn to a close. A move which happened not a moment too soon, as during these meetings Beijing was locked down, draconian security measures were introduced, dissidents were shipped off to labor camps, petitioners were detained in defacto holding facilities, and other potential trouble makers were removed from the capital all together. But through it all the Chinese Communist Party selected their new top guard, who they now present to the people of China:

Who are these guys?

During the national congress these seven men were chosen out of a pool of 10 potential candidates — who themselves were selected after an extended series of secret backroom meetings and political jockeying by the party’s most powerful members — by the 200 voting members of the CCP’s central committee.

“Conservative,” is one word that has been thrown about to describe this new pack who will more than likely hold their offices for at least the next five years and will decide the course of a country that may be poised to become the most powerful in the world. But it’s also a country that is facing an economic slow down, widespread public discontent, and ever growing pressure to reform not only economically but politically.

The ascension of Mr. Xi and other members of the “red nobility” to the top posts means that the so-called princelings have come into their own as a prominent political force. Because of their parentage, they believe themselves to be the heirs of the revolution that succeeded in 1949, endowed with the mandate of authority that that status confers.

Mr. Wang joins Mr. Xi as one of three or four princelings on the projected committee. The princelings are not a coherent political faction, and their ranks are rife with personal and ideological rivalries. Their family connections may mean a greater confidence with wielding power and pressing for bolder changes. At the same time, that class has grown wealthy off China’s political economy, in which officials and state-owned enterprises work together to reap benefits, often at the expense of private entrepreneurship. Even those princelings who support liberalizing the economy or the political system still believe in the primacy of the party, and their push for various reforms is seen as an effort to ensure the party’s survival.

The line-up belied any hopes that Xi would usher in a leadership that would take bold steps to deal with slowing growth in the world’s second-biggest economy, or begin to ease the Communist Party’s iron grip on the most populous nation.

Another point of contention is that the new members of the standing committee represent both sides of the political riff that runs down the center of the Communist Party, and policy stagnation is predicted:

“The leadership is divided,” said Jean-Pierre Cabestan, a Chinese politics expert at Hong Kong Baptist University, adding however that the new leadership would find it easier to make progress on economic reform rather than political change.

“It’s easier for them to move to a new growth model. I think they agree upon that and that won’t be the hardest task. But I see a lot of political paralysis.”

Of the three candidates who were not selected, two of them, Wang Yang and Li Yuanchao, were considered too liberal, while the third was Liu Yandong, the only female of the group.

Perhaps she is correct: it looks like China will remain on political auto-pilot for at least the next five years.

How were these leaders selected?

Check out this excellent infographic by Shanghaiist: