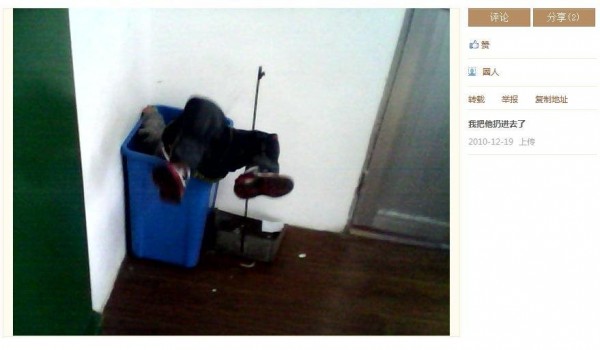 Children Being Abused in Schools in China Becomes a National Issue

A series of incidents of students being abused in kindergartens in China have provoked national outrage.

“Now is a very bad time to be a teacher in China,” a kindergarten teacher in Jiangsu province spoke pensively.

What she was referring to was the fact that a video and a collection of photos of kindergarten teachers abusing their students have recently gone viral on the internet and in the Chinese media, which stimulated a wave of public anger which has impacted kindergartens and their teachers across China.

On October 15th, a teacher in Taiyuan was caught on her classroom’s CCTV camera slapping a five year old student dozens of times within the span of half an hour because she reputedly did not know the answer to a math problem. The video went viral on China’s social networks and was later picked up by the country’s mainstream media, causing widespread public outcry. The kindergarten was immediately shut down and the teacher was held in administrative detention for 15 days.

Teacher in China lifting student up by his ears.

Then, to add fuel to this fire, on October 24th a photo spread on Wiebo of a teacher lifting a young student completely up off the ground by his ears. Netizens took up the call and found more photos of this teacher putting tape over her students’ mouths, tossing them head first in trash cans, and subjecting them to various other types of cruel and unusual punishments — often with a smile on her face. This teacher apparently uploaded the incriminating photos to her own QQ account. After being promptly fired, she was later questions as to why she lifted the boy off the ground by his ears and then posed for a photo, to which she responded: “It was for fun.”

Maybe it was fun — for her. Though the entire story behind those photos has not yet come out, even if these were just attempts at some funny classroom photo opts and not full on abuse the fact still remains that this really stirred up a lot of anger across China and has cast a darker shadow of suspicion over the country’s kindergartens.

Student with packing tape over his mouth.

The fact of the matter is that it is common for teachers in China to hit their students, and the line between punishment/ motivation/ and abuse is often blurred. Countless times I’ve heard stories from foreign teachers about how their kids are smacked by their Chinese assistants if they don’t listen — but these smacks are usually just expedient methods of discipline and are not meant to cause much damage. Before now, it was my impression that this was either an acceptable means of disciplining kids in school or it was something that this society takes as being so normal and long standing that nobody bothers to challenge it.

Comments from Netease and QQ:

Nowadays just ten slaps gets on the news, but oh how I was abused by teachers back in the day.

10 slaps is indeed nothing. I remember when I was little and wrote 10 words incorrectly. For each word wrong I got 10 canings, with a bamboo reed a little thicker than a thumb. Now that’s called pain that is forever etched in memory. From then on, I never wrote as many words wrong ever again.

Our math teacher in the past was like this, so mean. Every class involved students being hit, with not a single class not involving someone being hit. And humiliating students too, using very ugly words. Back then, we didn’t even know to object/fight back, and didn’t dare tell our parents either.

Across China, sentiments against kids being harshly punished or abused in school has quickly been taken to the extreme. Teachers are now being held under microscopes, their every action often being watched through classroom CCTV cameras for any sign of them stepping beyond their bounds as educators.

Teacher smacking student for not knowing the answer to a math problem.

I received a report from one kindergarten in Jiangsu where a teacher disciplined a poorly behaving student by making him march in place for five minutes before being allowed to take a nap. It was a standard punishment, there was no physical discipline applied, and before the current uproar over student abuse nobody probably would have had any objection. But, in this new climate, the game has changed fast. The misbehaving child’s grandfather, who was watching the live feed of the punishment from the classroom’s CCTV camera at home, was provoked into action. He marched into school and began screaming at the teacher, calling her abusive and threatening to report her to the authorities and the local television station.

There now seems to be a purge rippling through China to weed out abusive teachers. Regional governments and netizens are rising to the occasion, as extreme actions of two rotten teachers have opened up the floodgates for a society to examine itself and its methods of discipline in the education system.

I suppose this is what “Now is a very bad time to be a teacher in China,” means.

Photos from QQ and Netease.

I am the founder and editor of Vagabond Journey. He has been traveling the world since 1999, through 90 countries. I am the author of the book, Ghost Cities of China, and contributes to The Guardian, Forbes, Bloomberg, The Diplomat, the South China Morning Post, and other publications. VBJ has written 3638 posts on Vagabond Journey. Contact the author.