RIO DULCE, Guatemala- The Backpacker Hotel sits on the bank of the Rio Dulce in the eastern fringes of Guatemala. It is made of large plank boards and looks like a plantation storage house, its common area extends out over the river, and the rooms look out to the jungle beyond. Iguanas play on the [...]

RIO DULCE, Guatemala- The Backpacker Hotel sits on the bank of the Rio Dulce in the eastern fringes of Guatemala. It is made of large plank boards and looks like a plantation storage house, its common area extends out over the river, and the rooms look out to the jungle beyond. Iguanas play on the roofs. On a sunny day, there is not better place to sit in Rio Dulce than at the dockside tables of the Backpacker Hotel, do-nothing, and watch the motor boats and dinghies drive past.

The dormitory is one large room of 20 bunk beds, and is occupied with the usual suspects. There is no privacy. I walked through the dormitory to my room, found a young, completely naked Basque man with his dingy flinging wild in the center of the large room. He was very aggressively drying himself off with a towel while his friend watched. A girl in the corner of the dormitory was showing vast interest in her novel.

We paid 60 quetzales for a private room on the far side of the dormitory, we did not wish to return the Basque boys the favor. At $7.50 a night, Chaya and I thought we were getting a bargain.

We intended to stay at this hotel for a week. We only ended up staying for one night.

The Backpacker Hotel in Rio Dulce turned out to be in the midst of an identity crises, they did not seem to know if they were a good backpacker hostel or a really poor nightclub.
———————-

[adsense]And then night fell, the hotel turned itself on. As we came to find out, the hotel’s unsuspicious looking restaurant doubled as a night club. As the moon rose over the river, as the frogs began to croak in what would have been a gentle scene of nature and man stomping on the same turf — the kind of night where even the most frugal of travelers would let slip enough cash to keep a beer on their table — a wall of speakers whisked the landscape away with an onslaught of bad Latino dance music. The volume was so loud that it became nearly impossible to talk with the person next to you at the dockside lounge, and very difficult to even have a conversation in the rooms of the hotel.

We had a room in the very back corner of the hotel, and still had to raise my voice to an uncomfortable level even to talk with my wife who was sitting next to me. Baby Petra groped at her ears, for the bass from the speakers were giving them a good thumping. The backpackers in the dorms were pissed, I was a little pissed too — conversation was out of the question, let alone sleep.

Seemingly without another option, I picked up little Petra and made the best of the night. We had a Shepard family dance party. Petra soon grew weary from dancing with her mom and pop, and drifted off to sleep. Drastic times . . .

But the noise continued. The music was so loud that I had to go outside just to see what was going on.

The restaurant/ dance club was virtually deserted, save for two couples dancing. Two skinny boys were provisioned with one hefty girl each. The two fat girls were really busting a move, not only on the dance floor, but seemingly out of their skin too tight jeans as well. I watched them from an opposing dock, waiting for the impending explosion of denim, buttons, and a machine gun splatter of zipper shrapnel.

These girls could really dance.

The full length of my arms could not have manned up to bear hugging a single one of them, but they had the slinky spines of a mongoose, and they squirmed up and down to the music, ever rubbing their rear ends up against the frontal mid sections of their skinny counterbalances. I watched them in pure admiration and wonder until I was joined by a young Guatemalan man on the dock, whose interest in the impending explosion was a little different than my own. All of a sudden I felt very uncomfortable.

I returned to my room, not feeling any better for knowing what was going on while the music played.

Until 2 AM the music blared.

Until 2 AM the music blared for almost nobody.

I reconvened with the other backpackers in the morning. Some had also given play to their curiosity and had gone down to the restaurant at night, only to find that the speakers blasted out Latino club rhythms to a virtually empty house.

The backpackers made for the door, one night of this auditory onslaught was enough. We followed them. 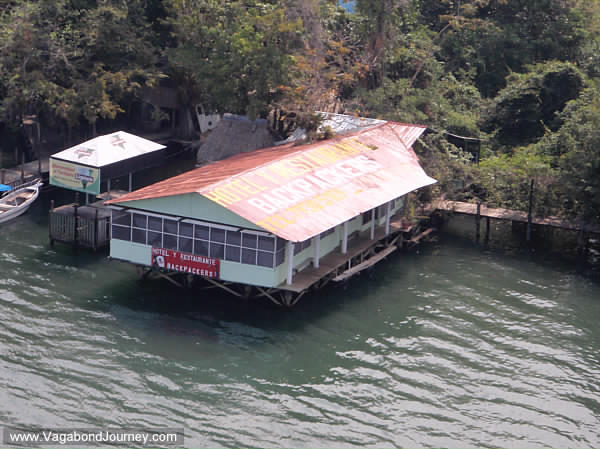 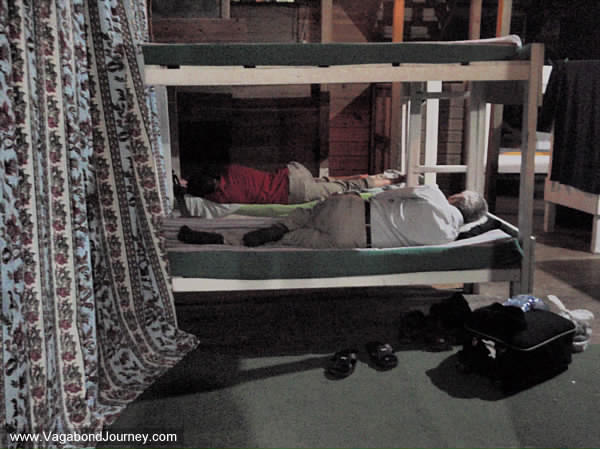