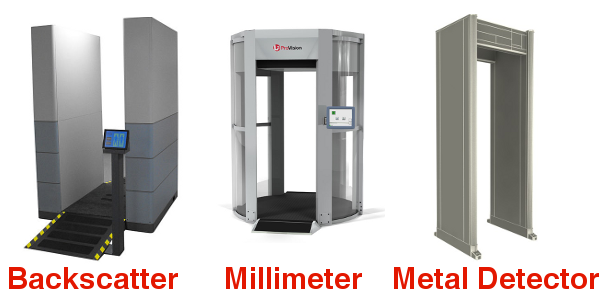 Airport Security: Backscatter and Millimeter Wave Machines, What They Are And How To Tell the Difference

Published on December 12, 2012 by Tiffany Zappulla

Imagine what flying on a plane was like little more than 20 years ago: freedom to carry on liquids, no checked baggage fees, actually wearing your shoes through security. Flying in the golden era of Pan Am was enjoyable, a luxury even, and all you had to do was book economy. Many international airlines still uphold the pleasantries of meals included in the ticket price and friendly, accommodating flight staff, but no airport can bypass the heavy gavel of the Transportation Security Administration. Younger generations who have spent most of their lives flying in the post-9/11 world would be surprised to know that the TSA never existed prior to 2001. Previously, random baggage checks were the only means of airport security, and metal detectors weren’t introduced until 1972 after a series of plane hijackings.

Now, no matter how comfortable a flight might be, there are always those minutes wasted going through security after check-in, and those minutes add up when you find that you have not adjusted your normal routine to perfectly align with TSA expectations. Forgot to take your laptop out of the bag? Prepare to get hounded until you do. Left a tube of lip gloss in your pocket? Better take that out before somebody gets killed!

And then there’s the moment when you don’t breeze through full-body scanners, which replaced metal detectors in 2009. I recently had to pass through one three times when the scanner identified a suspicious object near my left wrist…even though there was absolutely nothing on my left wrist. This scanner at Newark Liberty International Airport was one of TSA’s new millimeter wave units, upgraded to display an opaque outline of the body with yellow boxes as markers for areas that need a targeted pat-down. Unfortunately, the full-body scanner still requires the passenger to stand in an degrading pose – legs spread and arms behind the head – but the scanned images are visible to both the TSA agent and the passenger and he/she exits the scanner. The former body-specific “naked” images, which provoked controversy from passengers, had previously been assessed in private viewing rooms by TSA staff.

The new millimeter wave scanner images are certainly a step up from the old, photo-negative images that left little to the imagination, and it is no doubt more reassuring for passenger to be able to see the screen itself should they dispute the scanner’s reading or request a pat-down instead (pat-downs and metal detection are required for passengers who refuse to pass through advanced imaging technology, a.k.a. scanners), but backscatter machines – millimeter’s predecessor – allowed fliers to pass through without the suggestive pose…which I reckon was much preferred by women traveling in skirts. At the moment, what kind of machine you will pass through is a grab bag in the United States: some airports have only millimeter, some backscatter, and some both.

But now that we’ve confirmed that airport security is going to get less comfortable before it gets more comfortable, here’s the technology breakdown for body scanners. Backscatter technology identifies non-organic matter, such as metal and lead, by failing to reflect it back into the image, which is why the organic matter – various elements such as carbon, nitrogen, and oxygen – in your body shows up in backscatter images as bright white light: an X-ray. Millimeter images display the exact opposite, as a negative image wherein organic matter shows up dark and metal objects (as well as substances like glycerin and titanium dioxide) display as white blotches. Such is the result of millimeter wave signals reflecting off of foreign objects. However, neither machine is proven to detect powdered explosives, such as the pentaerythritol tetranitrate that Richard Reid stashed in his shoe during the 2001 American Airlines shoe bomb plot.

To which my response would be, why absorb all that radiation when you don’t have to? New millimeter scanners emit basic radio waves, the kind of non-ionizing electromagnetic waves produced by your microwave, except that millimeter waves exist at the highest radio frequency band. For a standard of comparison, a microwave emits an average of 2.45 gigahertz and a 122-millimeter wavelength, whereas millimeter waves run at 30 gigahertz and 10-12 millimeters in length. Such radiation does indeed penetrate the skin, and it’s also worthy to note that some individuals are more sensitive to radiation than others, making them less able to repair damage caused by radiation exposure. However, even though millimeter scanners discharge more radiation than your average microwave, the type of radiation emitted (non-ionizing) is far less dangerous than the ionizing radiation shed by backscatter scanners, which actually has the power to remove electrons from atoms and damage DNA.

The tech objects that most of us surrounded ourselves with every day, from cell phones to wireless routers, supremely downplay the severity of radiation received from either backscatter or millimeter scanners, and the amount of radiation considered “harmful” strongly depends upon an individual’s genetic makeup and how often he/she is exposed to other forms of radiation. Therefore, the less radiation one absorbs at an airport, the better, especially for business travelers who might fly more than 100 times in a year. If you’ve got a few seconds to kill and backscatter scanners are the only available option at your airport, opt for a pat-down instead, and if you can choose between the two scanners, pass through a millimeter scanner. With less-revealing results and less harmful amounts of radiation emitted, millimeter wave scanners are indeed the “lesser of two evils.” I hope I live to see the day when America returns to its flight ritual roots, but until then err on the side of caution and give up a little integrity for a pat-down, if only for the sake of your health.

Next post: Hongqiao Station, Shanghai: The Future of Train Stations?