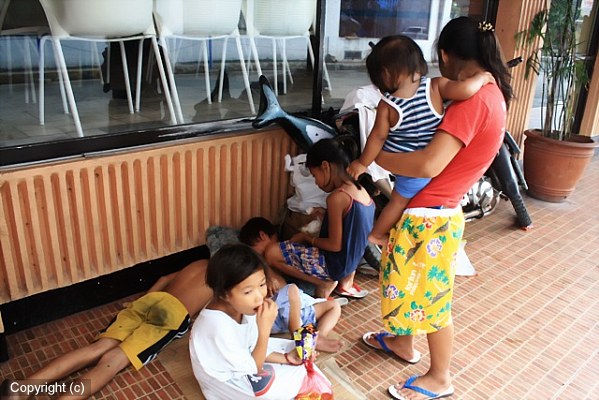 Street Families of Manila, A Meeting With a Mother of Six

Over half a million families live in the streets of Metro Manila. Go behind the scenes and meet one of them.

I found the girl hugging the pole of the street sign at the corner. I smiled to myself; I knew they were here. I had been here many times to visit my favorite Korean restaurant and occasionally satiate my cravings for kimchi stew. They had poked me a few times asking for money or food; I just couldn’t remember their faces.

A man stopped and handed her a coin. Another man passed by and she was calling out to him as I approached her. I didn’t take my eyes off her. Her eyes dropped to the plastic bag of groceries I was carrying and she broke into a walk towards me.

“Ate, please give me something out of that plastic bag.”

I expected this. This is normal in the Philippines, especially in areas where poorer families choose to dwell. Informal settlers abound and the government is struggling in solving the issue caused by the rampant problem of poverty. I didn’t get anything out of the bag though, I began asking questions instead. Let her wait.

Her name is Jessica, 9 years old. She has 5 siblings and they stay on this street. Like many street families who left the countryside for a better life in Manila but ended up on the streets, she has become accustomed to approaching and asking people for money or food.  The people have become accustomed to them as well.  Some kids are asked by their parents to beg, some do it on their own to have their own money, some are handled by illegal groups who kidnap them and force them to beg. More than half a million of these families are scattered through Metro Manila, and the number just keeps on increasing.

“Why are you here asking money from people?” I asked her in a very friendly tone I usually use for kids.

She answered, “So that I’ll have money to buy food.”

“Where’s your mom?” I continued.

“She’s out there somewhere doing pangangalakal.” She lied.

Pangangalakal means business when translated to English. But for these informal settlers, it means scavenging. They dig into garbage bins to find plastic materials, bottles, iron rods, and other items they can sell to junk shops. Many even depend on left-over food thrown out by fast food chains for their meals.

In my mind, I was disappointed because I badly wanted to speak with the mother.

“Does your mom order you to beg?” She answered no.

Her siblings started to arrive. Jenesis, the 13-year old eldest sister was carrying Jenel, a 10-month old boy who was the youngest. I asked where the other siblings were and she started pointing them to me.

The 7-year old Julie Ann was at a corner digging into a bag looking for a shirt to wear. Her older brother was walking towards a sidewalk outside a restaurant where a younger boy was sleeping.

Their father arrived too and went behind the wall separating the restaurant from another building. I asked what was there and Jessica admitted her mother was actually there.

I started walking towards the boys lying on the floor. A few seconds later the mother appeared throwing instructions to the kids. She was barefoot.

She didn’t smile. She ignored me and continued barking orders to the kids.  I was nervous that she wouldn’t talk to me because I was more than intent to talk with her. When she was done telling them to do this and do that, she turned to me and complained the kids were hard-headed and sometimes disobedient.

The mother’s name is Jennifer. At 32, she has six kids but no job. Moises, her husband, was a smiling but shy man who works as a parking boy in front of the restaurants. Her family came from Trece Martires, a city 30 miles from Manila. Over 15 years ago her parents decided to move here to find greener pastures.

She said they stay here at daytime but go home to a rented house in the evening. I wasn’t sure if this was the truth because the daughter told me they sleep on the stairs of the adjacent building at night.

Jennifer was unexpectedly friendly and attentive to my questions. I took the bread I bought from the bakery and handed them to the kids. They thanked me.  They were not the rude kind of street kid; they were even shy and behaved. I noticed one of them had bloodshot eyes. Two of the kids and the father had sore eyes. I asked if they use eye drops to cure them, she replied they use a few drops of breast milk which, according to old Filipino tales, is an effective cure for sore eyes.

Jennifer was proud to tell me that four of the kids go to school. Their relatives live on the other street and her parents were staying just around the corner, but she wasn’t in good terms with them. The people working and living in the buildings along the street have already known them so they are not asked to leave the area, and they repay that with courteousness. She helps clean the area everyday.

This family is fortunate enough to stay on a street that’s not congested with homeless families. They are sometimes even given good food that people take out as left-overs from the restaurants. The cleanliness of the area around them seems to be maintained as well. This is not a place where passers-by dodge street kids along sidewalks and can smell the awful reek of garbage, drains and human smell, like in Manila City and Quezon City.

where they hang their laundry.

I was amused with the youngest child’s chubbiness, so I kind of used it to steer the conversation to where I wanted it to go. I looked at the baby from afar and asked Jennifer, “Do you still plan for another child?”

I wanted to tell her thanks that she knows that it’s hard but of course, I kept it to myself.  It was time for the questions I had been waiting to ask.

“Where did you give birth to all your kids?” I inquired.

“In various hospitals in Manila.” She replied.

“How much did you have to pay?” I continued.

“There was a hospital that didn’t accept money as payment. We just donated stuff like soap, shampoo, etc.  But in one hospital I had to pay Php 2,000, in another I had to pay around Php 500.”

I was half-expecting that she gave birth at home. I continued around this topic a little longer and I told her about the recent signing of the RH Bill into law.

Formally known as the Responsible Parenthood and Reproductive Health Act of 2012, this new law aims to provide universal access to reproductive health care in the Philippines. It is meant to create services to promote the health of women and children, prioritizing poorer households. After intense debates, rallies, and a long drag on the proceedings (that even bishops attended) about issues such as the health implications of contraceptives, government funding and morality, the bill was signed into law by the President of the Philippines on December 21, 2012. This was much to the dismay of the Catholic Church, and the government and even some Catholic institutions have audaciously defied this new act.

I asked her if she has heard about this law. She hasn’t.

“When you were pregnant, did you have regular check-ups too?” I continued.

“Yes, at the health center,” she said proudly.

“How about the vaccinations?”  I inquired further.

“At the health center too, they have it all covered,” she replied with a smile.

She had been taking advantage of the benefits that the RH law is aiming to improve upon, but I don’t think she has yet maximized them. She hadn’t gone to any seminars, and she lacked awareness — otherwise she wouldn’t have this many kids without a job to support them.

I could only pray for this new law to be a really successful weapon to reduce maternal deaths and poverty, promote the welfare of the children, and keep them out of the streets.

When I left the area after dinner, they were already sitting on the marble steps of one of the buildings.  I bade them goodbye and they thanked me for the bag of groceries I gave them and reminded me of my promise to give them prints of the photos I had just taken.

I’m pretty sure I’m going to see them again soon.

Next post: China’s Knock-Off Cities and Western Architectural Copycatting, What Does This Mean?