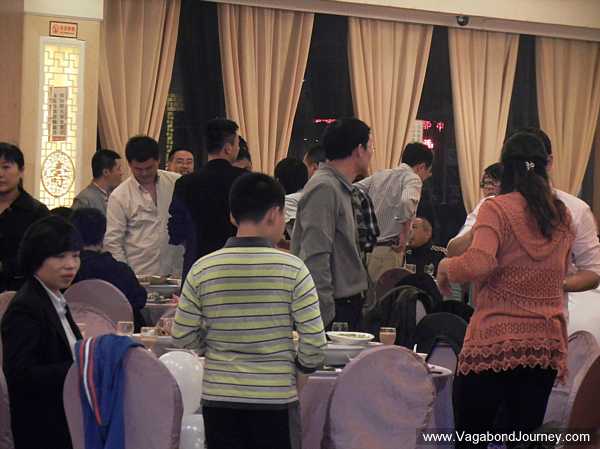 A group of grown men were laughing and giggling on the stage. They were singing karaoke together. One pined two stuffed animals to another’s shirt where tits should have been as he belted out a Chinese pop song. They were red faced and drunk. They played party games like “who can blow up a balloon and make it explode first,” and “who can hold out a shout the longest.” These men were jolly, celebrating, proud. I could have been at a wedding, a company banquet, or the opening celebration of a new business initiative, but I wasn’t: I was at a ten year old’s birthday party.

Every now and then, the party games would come to a halt and the men would step off stage to be replaced by kid or two who would sing a song or to be awarded a prize — like a stuffed animal or blow up dolphin. But just before we could assume that the party was taking a juvenile turn the men would jump back up on stage with a new party game which brought giggles to their ever-reddening faces and delight to the crowd. I think the winners got cigarettes.

Throughout all of this, the birthday boy would get up on stage and do little things here and there, but although a screen with revolving pictures of him growing up was displayed prominently on the stage, I cannot say that he was the star of the show. Most of the time he was running around the restaurant playing chase with the other kids.

An entire banquet room of a luxury restaurant was rented out for the occasion, and each table had the perfect number of guests. Not one seat was empty but nobody lacked a place to exist. Events like these are meant to give the impression that they were planned and coordinated to precision, the directly show the couth and social standing of the hosts. The show begins with the door greeters, continues with the decorations, the party games, the music, and is put over the top by the food.

The first round of the meal was the tidbits — boiled peanuts and things like that. Nobody touched these as a point of tradition. Then the cakes arrived. Each of the 12 or so tables had it’s own. We all sang happy birthday, and ate it. Then it was time time for the big food.

The food began coming out of the kitchen in a trickle. Each table would get one dish, and everybody would jump on it like hungry hyenas. Then another dish would come, and the eating focus would be divided in two. Then a third dish would be laid upon the table — then the fourth, fifth, and sixth would arrive in rapid succession.

The servers continued piling the food high, laying one platter of delicacies on top of another, until we has a wobbly Chinese food pyramid in front of us. There were dishes of tofu slop, soup slop, entire fish, pork, various types of chicken, all kinds of vegetables, fruit, on and on. Each dish was multifaceted and arranged artfully. Each heavy course had garnishes and side dishes placed neatly around them. Though there was not a grain of rice: that’s peasant grub.

At one point in the evening I endeavored to count the number of heads on the table, but stopped at eight. Entire birds, fish, and a slab of pig face speckled the spinning round table before me. It is my impression that the quality of a Chinese meal is considered to be in direct proportion to how many heads are served. For this meal, there were more heads on the table than there were connected to bodies sitting at the table.

As the meal wore on, the pile of food rose higher. Dish was stacked on top of dish. Rather than slowing down the flow of food to match our waning appetites, the frequency of of delivery only rose higher as the dinner approached it’s climax. Soon enough, platters of delicacies were literally buried beneath other delicacies. The goal seemed to have been to put as many plates of food on the table as possible, and then add ten more.

At first, we oohhed and ahhhed to ourselves over each dish that was laid before us, mildly excited about what would arrive next. But the onslaught of cuisine quickly became overkill, and desensitized our senses, our palates, and our excitement. It did not take long before even the most outlandish dish become a mere part of the landscape — or something for the British girl to play with comically.

There was no way that we could finish off this mountain of food, which was stacked so high that it obstructed our view of the people sitting on the other side of the table, but it’s not my impression that we were suppose to. This too, was by design. It was clear that we were not only being well-fed, but well-impressed.

I’ve grown use to Big Shows here, but how this shear volume of food was heated, prepped, assembled, and artfully laid out on myriad platters so quickly in a single kitchen remains a mystery to me. I have to estimate that thirty pounds of food in the form of at least two dozen unique dishes were placed upon our table within the span of an hour. Impressive.

Birthday wishes are on little cards attached to this tree.

But soon enough, the birthday boy walked up on stage and began plucking little cards off the wish tree — which, in this case, was an artificial Christmas tree. As each guest who entered the party they were stopped at the door and given a little blue card to write a special message on for the kid whose birthday it was.  Now I watched as a few of these cards were plucked off the tree and read aloud, as those who wrote them were awarded prizes.

The gift giving at this birthday was an incredibly straight forward affair which warranted no form of celebration at all. When guests would come through the door they would hand a gift to the birthday boy’s mother who would unceremoniously cart it over to a pile in a corner of the room for the kid to receive after the party was over. Most of the gifts were not wrapped and carried no indication of who the giver was. It was almost as though the guests brought gifts because they knew they were suppose to but had no idea why. This practice seemed to be a mimicry of the Western style but lacked the more subtle meaning that we usually connect to the act of gift giving.

Needless to say, the birthday boy did not freak out over his gifts. Honestly, he didn’t really show any overt interest in them at all, and remained stoic throughout the party. Gift giving in this sense seemed to be more of a formality rather than the climax of the party.

Traditionally, everyone in China celebrates their birthday at the same time: during the New Year festival. According to the Chinese system of counting age, this is when everyone turns a year older. But birthdays, as in celebrations celebrated on the anniversary of a person’s birth, are a part of Chinese tradition, although they are only celebrated when children turns three months old and again when they reach 60 — whereupon parties will commence once a decade from then on out. But this is changing fast. Celebrating individual birthdays yearly is becoming part of Chinese culture to varying extents, but parties are often not very big affairs — maybe just cake and a dinner out at a restaurant with family and friends. One exception to this is the tenth birthday, which has now become a massive celebration, at least in the middle/ upper class spheres of the culture.

“Birthday parties are celebrations for the family.”

This is not the way I was raised to view this event, but I felt my perspective being warped and transfixed as I sat in that banquet hall watching a room full of men youthfully playing around. Somehow, it all started to make sense. At first, I viewed the men carrying on drunkenly, playing games, singing, toasting each other, and distributing cigarettes at a child’s birthday party a touch cynically. It all seemed like some kind of dude feast, not anything approaching a celebration for a ten year old. But then it started to become clear:

This wasn’t just a celebration for a ten year old.

This was a celebration for the kid and his entire family.

When viewed through this lens, the men congratulating each other, smoking, and getting drunk was no longer something obtuse, as this was a party for them nearly as much as it was for the kid.

In my culture, we celebrate the individual having a birthday and tend to ignore the support structure that this individual depends on. The American birthday party is little more than a pandering of individualism, we celebrate people as sub-divided entities removed from the matrix which sustains their existence. Really, why should a kid be congratulated for turning another year older? What did he do to arrive at this age other than wake up each day and leech off of what his parents and family provide?

In China, individuals are almost indecipherable from the group they come from, their successes are their failures reflect the family unit as a whole. To separate out an individual as a unique entity removed from their family is to not give credit where it is due. The birthday party is a family celebration.

I am the founder and editor of Vagabond Journey. He has been traveling the world since 1999, through 90 countries. I am the author of the book, Ghost Cities of China, and contributes to The Guardian, Forbes, Bloomberg, The Diplomat, the South China Morning Post, and other publications. VBJ has written 3626 posts on Vagabond Journey. Contact the author.

Previous post: Children Being Abused in Schools in China Becomes a National Issue