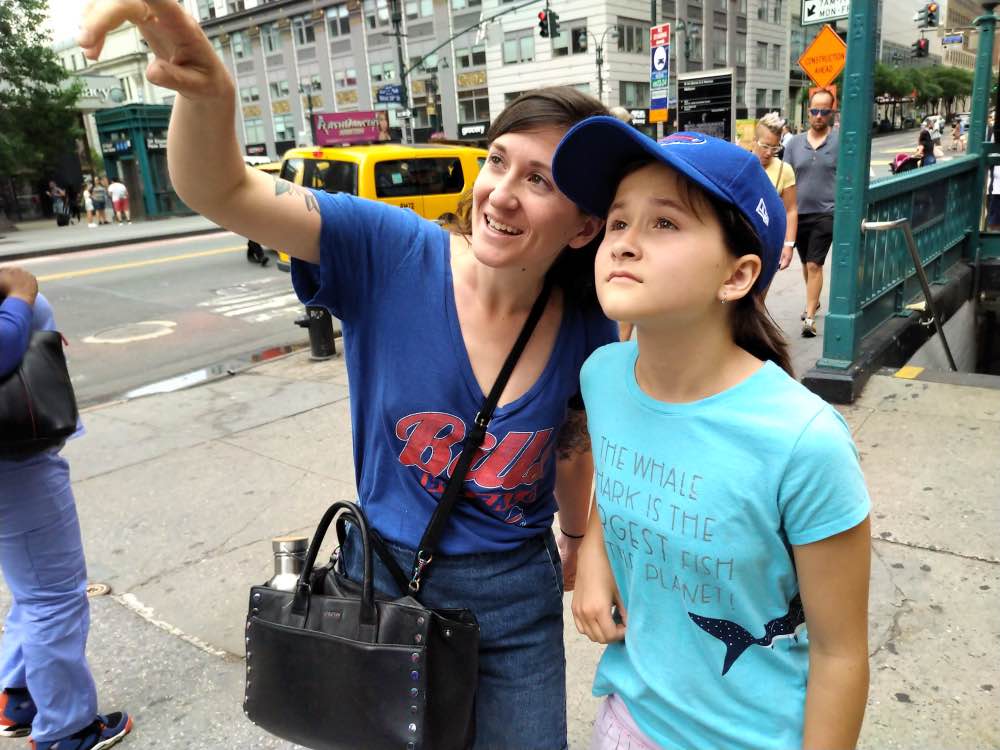 BUSHWICK, Brooklyn– So what am I doing in New York City? Good question. I can go anywhere in the world, so why did I decide to come here?

My wife, now clad with her AMI certification, wants to get back to work. My kids want to go to school — they want friends … and to be able to understand what their peers are saying — which is an odd luxury for them at this point. I also understand the benefit of having a solid base of operation for myself that I can travel in and out of. This is my current strategy: I travel and collect content then return to somewhere where I can process and publish it.

The only question we had was where.

China was not an option. No way. Too polluted. Far too fascist at this point under the Xi regime.

Malaysia? Why not … except for the fact that my wife wasn’t able to find work there.

Taiwan? Good by me … but, again, my wife couldn’t get in on a job there.

Europe? It would be nice but tough to get visas for the entire family. (Although my wife and kids are currently applying to become Polish citizens.)

Why I decided to move to NYC

They can’t kick me out

I’m hesitant to say this, as it contradicts much of my previous positioning, but there is a benefit to having a base of operations in your home country. To put it simply, it is the one place in the world that you can’t be kicked out of. Regardless of what I report on, I cannot — theoretically — be deported from or denied entry to the USA. I can be detained … but that’s a different story. I also do not need a journalist visa to work here.

I’ve been becoming a little weary about where the media landscape of the world is heading and how many governments are cracking down on foreign journalists and other chroniclers. They want to control their own message now, and having independent observers on the ground really muffs this up … So some countries are just closing their doors or are making things difficult for those looking to tell the truth about what’s going on. I’ve even recently lamented the fact that I didn’t establish myself behind a pseudonym.

I don’t want to set my family up in some country and have something stupid happen due to my work. I want them as far away from that shit as possible.

So the question really was: in the USA, what’s the best place to set up a base of operations?

There was only one answer to that question:

New York City. They may not let me in but they can’t kick me out.

New York City is nowhere close to anywhere else in the USA. It’s nowhere close to anywhere else in the world. You will never say, “New York is a lot like …” or “New York reminds me of …” You can’t say this — New York City is it’s own creation. It is one of maybe three cities on the globe that can be called iconic. It’s a mix of everybody from everywhere.

This isn’t a cliche or baseless romanticism — it’s authentic. People come here and bring their food, music, booze and share it … not really to appeal to outsiders for the purpose of making money but for other transplants of their culture who want to access the stuff they like back home here in NYC. The Colombian food is real Colombian food, the Greek food is what they really eat in Greece, the Dominican salons give the same hairstyles as the ones in Santo Domingo.

New York City is like an assemblage of mismatching pieces from the world’s cultural puzzles. For a traveler who has logged 20 years on the road, being here is like rolling through a kaleidoscope of memories daily. Everywhere comes off as a little piece of somewhere else, and the familiarity feels comfortable for someone whohas experienced the places represented.

Opportunity is direct derivative of location. If you’re in a place where things happen there is a better chance that things will happen. If I didn’t set myself up in China when I was just starting to move into the higher tiers of journalism then I probably wouldn’t have gotten my first book deal. If I didn’t get my first book deal I probably wouldn’t have been invited to write for Reuters. If that didn’t happen then I wouldn’t have come into contact with my first editor at Forbes … Opportunity is a chain, but the first link is usually firmly attached to a place where the action is happening.

NYC is the global epicenter of media. This is the place that things happen in my profession, and I give myself the best chance of moving forward by being here. Nothing is a given and the competition is thick … but why not play the game for a while? I might lose, winning only means that you can play for another day, but I will always know that I stepped up and spun the wheel.

My kids are another story. What’s the key jobs of a parent? 1) Keep your kids alive. 2) Give them as many opportunities in life as possible. Where are my kids going to have more opportunity, on the hippy beaches of Mexico or in the cultural center of the world? Where are they going to learn more? Where are they going to experience more? Where are they going to cultivate the friendships and connections that could potentially propel whatever they want to do forward? In NYC they get to go to a high-end, Upper East Side, Mandarin immersion, rich people school. Who knows what would be better, but simply being familiar with the the peoples, cultures, and classes that pool together here, simply going to a school that’s more on the elite side, I believe, gives them an advantage. Maybe. Maybe not. But as a parent it’s your job to give your kids a chance to step up to the wheel.

NYC is also a place for people who like to work hard. You have to or you get selected out fast. When kids are growing up they are putting together the pieces of what is normal. This normalization will stay with them for their entire lives. I had parents that worked hard for what they wanted, and something of this stuck in me as being normal. If you want something, you work for it day and night, you don’t quit … all of those cliches I didn’t need to learn, I just absorbed them by watching my parents. The environment that kids grow up in becomes a part of who they are. Why not toss them in with the hustlers and see what happens?

NYC has an airport that gives me fast and easy access to pretty much everywhere in the world, which is my primary criteria for selecting bases of operation. A base of operations is different than a home. A home is a place that you live, a base of operations is a place that you work out of. My work has two phases: content collection, where I travel doing research and cultivating experiences about whatever it is that I’m working on, and content processing, where I sit at a computer assembling, editing, and publishing. It doesn’t matter where in the world I process content, as all I do is sit in front of a computer, but being in a place that gives me quick and easy access to other parts of the world is definitely a benefit.

Basically, I could see a story pop up on my news ticker that I want to cover and in a matter of hours I can be on a plane flying out to the source. I don’t need to travel for an additional day to get to the international airport; I don’t need to bother with regional flights. I just walk down to the subway and go. The advantage of this is so great that airport cities are being built all over the world.

If I’m in New York City I’m an hour away from JFK, 50 minutes from Laguardia, and an hour and twenty minutes from Newark. I’m right in the center of the air travel hub of the world. I have easy access to Europe, Africa, Asia, Latin America, the Caribbean, and anywhere else in the USA. This global coverage is essential as I’ve been moving into other realms outside of East Asia.

My wife and I got together here

New York City is integral to my story with my wife. She lured me to call off an RTW bike trip with a promise of “apple pie” and a space in her closet where I could live. I took the bait, but then showed up to find that “apple pie” really meant apple pie and that she didn’t even have a closet. I was scammed. But what else was I going to do? I stayed in New York City, graduated from university, and eventually — after multiple failed attempts — got the woman who I would marry. I moved to New York City and fell in love. Beat that, everywhere else.

Wade Shepard is the founder and editor of Vagabond Journey. He has been traveling the world since 1999, through 90 countries. He is the author of the book, Ghost Cities of China, and contributes to The Guardian, Forbes, Bloomberg, The Diplomat, the South China Morning Post, and other publications. Wade Shepard has written 3532 posts on Vagabond Journey. Contact the author.

Next post: Tips For Preparing for a Road Trip This Summer

Previous post: What You’ll Find When You Explore Israeli Cuisine