We are all, right now, looking another year in the face. Tonight, the entire world will reset its charts and add another tick onto the yearly clock: 2009 will turn into 2010. All of the individually mandated cultural year counters have given way to the Gregorian one — by force, by guile, alpha-cultural trampling, or [...]

We are all, right now, looking another year in the face. Tonight, the entire world will reset its charts and add another tick onto the yearly clock: 2009 will turn into 2010.

All of the individually mandated cultural year counters have given way to the Gregorian one — by force, by guile, alpha-cultural trampling, or because it just makes sense to have a uniform world calendar.

I am in New Jersey with good friends. I considered traveling the 20 miles to New York City to welcome the new year in with other friends, partying. I considered going down to Time’s Square to watch that hyped up ball drop — which sounds to me like an atrocious endeavor, though it would have potential for good writing.

Rather, I am going to sit in New Jersey with my new baby, new wife, and good friends and a couple Brazilians, drinking beer with laughs — but not yelling, not screaming, not looking for the usual bout of trouble that could only come from a good wine night — well, probably not. 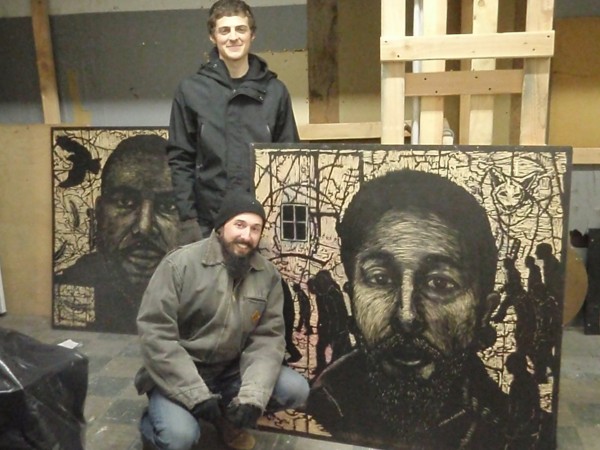 It have been perhaps interesting to find out what goes on New York City on New Year’s — once. But I know that being pressed into a crowd of thousands like a school child’s peanut butter and jelly sandwich  smushed inside his lunch box by an overzealous apple would not be the most enjoyable way to spend this holiday.

I have seen a lot of different New Years celebrations in a lot of different places: 3 Chinese new years in a row, 2 Tibetan new years, 1 Thai new year, a Nepali one, and a very interesting new year’s eve in the Peruvian Amazon, where every house in the entire village concurrently burned an effigy of the person they hated most during the previous year.

But my favorite sort of New Years is the one where I sit and drink beer and talk with friends, talk about past things and future dreams, and stake out my own course for the upcoming year.

So I sit with Justin Catania, the artist of Vagabond Journey.com and the creator of the t-shirts, and his girlfriend Helen in New Jersey. We drink beer, we talk, we play with Petra, we watch nature documentaries. We are having a good new year.

It is good to have an arbitrary day for planning, for dreaming, for setting a course and constructing goals . . .  just for the fun of doing so . . . and there is no better day to do this than on New Year’s Eve. New Year’s Eve should be a holiday for introversion, purging, burning, severing roots, and finding fertile soil on the other side of the fence. New Year’s Eve is for dreaming.

For finding out what is going on here.

As I wrote out these goals the Middle East was still before me, while Morocco, Central America, South America, China, Japan, India, Eastern and Western Europe, Mongolia, and Southeast Asia laid behind. I did travel to the Middle East in 2009, I think I went to 11 or 12 new countries this year.

11 or 12 new countries with a pregnant girlfriend.

Though I did accomplish most of my pre-stated goals none the less. I traveled through the Middle East, I now make over $5 a day from Google Adsense, the Alexa ranking of VagabondJourney.com moved up from 800,000 to under 150,000, I maintained better contact with my family (as well as made a new one), and I did work hard while enjoying it.

I look back on this past year, and I am satisfied. I did well, I accomplished much of what I set out to do, and did a lot more of what I had no intention of doing. I had a baby, got married, and began traveling with a family. I set the foundations for making Vagabond Journey.com a business that can sustain my travels. I found a rhythm that I wish to continue stomping out far down the Road.

At this time last year, the website was having vanity issues, and was feeling very insecure about its appearance. I was still using Blogger as the blogging system, and had not shifted to WordPress until well into the year. Now VagabondJourney.com is looking decent — or so I think. Plans are under way to transform the home page once again, and to continue making the travelogue pages look better and more easily usable.

At this time last year, I pledged to provide more usable travel information. To these ends, I started Travel Help, a place where readers can ask me specific questions about traveling and receive answers, the Travel Community Forum, where readers can ask me as well as each other questions, and Wiki Vagabond, a place were travelers can upload specific travel information and direct tips, scams, grafts, work, and ways to to travel the world with very limited resources. The former two sections of Vagabond Journey are in their infantile stage, but I hope for them to someday be the meaty parts of this site.

At this time last year, there was only one writer on Vagabond Journey.com, now there are four. My wife Chaya began writing at Travels with Petra, Amanda at Wayward Wanderings, and we have a new Australian correspondent named Pearl who may soon be blogging at pearl.vagabondjourney.com. I hope to add one or two other traveling writers, and transform Vagabond Journey.com into a team project.

2009 was perhaps the year where Vagabondjourney.com found its stride, hopefully, in 2010, we can increase the pace.

The goal set for this next year is a straight forward one, though very monstrous.

I do not know which goal will be more difficult. Traveling with a family has so far been the most difficult thing that I have ever done, but the only thing to it is to do it. Making money off of Vagabond Journey.com is far more complex: I need to make the money from other parties, it requires more than just my own personal effort.

If I can make $250 off of adsense, $100 off of t-shirts, merchandise, and reader contributions, $50 from Amazon, and $100 from other advertising each month, then we will be making strides towards making a living off of this website.

Each step I take I feel as if I am getting a little closer to where I want to be. I am a man who wants to have it all, this is the story about chasing down every wild dreams: traveling the world, working for myself, and raising a family.

Will it all happen? Will I be successful? I have no idea. All I can say is continue reading Vagabond Journey.com in 2010 to find out.

As I am standing at the end of one year of travel writing and entering into another, I must thank the readers of Vagabond Journey.com. Without you none of these goals could ever be met, no matter how hard I work. This New Year’s Eve, I must say thank you.

And, as always, Walk Slow,

Wade Shepard is the founder and editor of Vagabond Journey. He has been traveling the world since 1999, through 90 countries. He is the author of the book, Ghost Cities of China, and contributes to The Guardian, Forbes, Bloomberg, The Diplomat, the South China Morning Post, and other publications. Wade Shepard has written 3557 posts on Vagabond Journey. Contact the author.

Previous post: Can Immigration Tell When I Entered the Country if I Lost My Passport

Traveling home for the holidays.

Travel To Copenhagen To Give A Talk At Parliament

A more professional sort of trip to Copenhagen.

I Publish In A Harvard University Journal

In 2018 I considered going back to university. This is some of the debitage.

Travel To Armenia For Tech Conference

I would have loved to have delivered this story in smaller, more in-depth parcels, but this is what we’ve got.